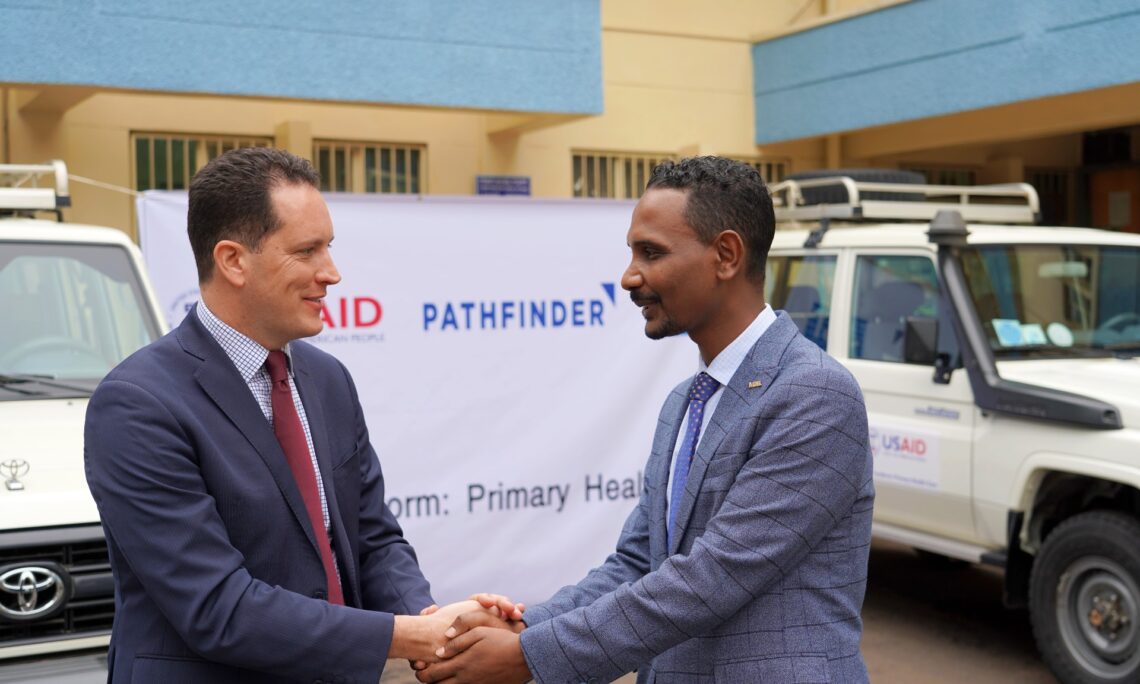 During his trip, Mission Director Jones met with the Mayor of Bahir Dar, Dr. Diress Sahilu.  They discussed USAID’s historical support, urgent needs facing communities in the Amhara Region and continued U.S. support for peace and stability in the region.  Mr. Jones thanked Dr. Diress Sahilu for the city’s decades of close partnership with USAID.  As he met with local officials, humanitarian organizations, and internally displaced persons (IDPs), Mr. Jones reaffirmed the American people’s longstanding partnership with the people of Ethiopia.

Mission Director Jones also visited USAID’s partners at the Amhara Regional Health Bureau, including the bureau head, Dr. Melkamu Abte, to hand over eight USAID motor vehicles the bureau had requested to help the region in its life saving work.  Worth over $400,000, these vehicles will be used to deliver essential medicines and medical equipment to health facilities and to transport doctors and medical staff to the hardest-to-reach areas in Amhara Region.  Mr. Jones discussed the United States government’s support for the Amhara Regional Health Bureau, which includes over $4 million to provide emergency medicine and repairs to health facilities damaged by the Northern Conflict.

Lastly, Mr. Jones visited the Organization for Rehabilitation & Development in Amhara (ORDA), where he met with ORDA Executive Director Alemayehu Wassie and representatives of internally displaced peoples (IDPs) and host communities in Amhara Region.  Over a shared fasting lunch, Mr. Jones listened to the IDP and community representatives’ concerns, spoke about the ongoing efforts by the U.S. government to provide lifesaving assistance, and learned more about how USAID can better support people across the region.

The United States is devoted to the health, welfare, and prosperous future of the people of Ethiopia.  In 2021, USAID invested more than $1.2 billion across the country in humanitarian and development aid.  In the Amhara Region alone, the American people have provided over $430 million in humanitarian and development aid in the last two years.  This is another example of cooperation between the American people and the people of Ethiopia.