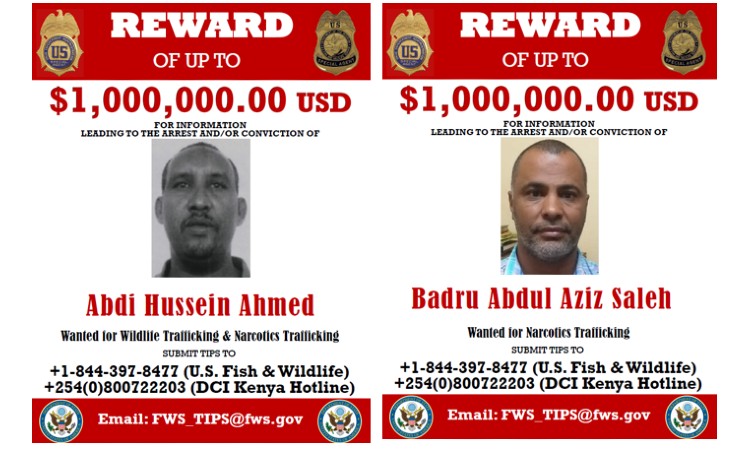 May 26, 2022, Nairobi, KENYA.  Today the United States announced rewards of up to $1 million each for information leading to the arrest and or conviction of two Kenyan fugitives, Badru Abdul Aziz Saleh and Abdi Hussein Ahmed.

The two fugitives are major violators of U.S. narcotics and wildlife trafficking laws and are wanted for their alleged involvement in an international organized criminal network that trafficked wildlife from Africa and sought to traffic illicit drugs to the United States.

“Eradicating drug and wildlife trafficking are priorities of the Biden Administration.  We are grateful for the continued partnership of the Government of Kenya to capture and arrest members of these criminal networks” said Eric W. Kneedler, Chargé d’Affaires a.i., Embassy of the United States of America, Nairobi.

The reward is offered by the United States (U.S. Department of State, U.S. Fish and Wildlife Service, and U.S. Drug Enforcement Administration) with the full support of the Kenyan National Police Service.  The United States and Kenya will continue to collaborate to combat wildlife trafficking, drug trafficking, and any other transnational crime affecting both countries.

Individuals with information on the fugitive’s whereabouts are asked to contact the Fish and Wildlife Service at +1-844-FWS-TIPS or +1-844-397-8477 or email FWS_TIPS@fws.gov, or the Kenyan Directorate of Criminal Investigations Hotline at +254(0)800722203.  Identities are kept strictly confidential.