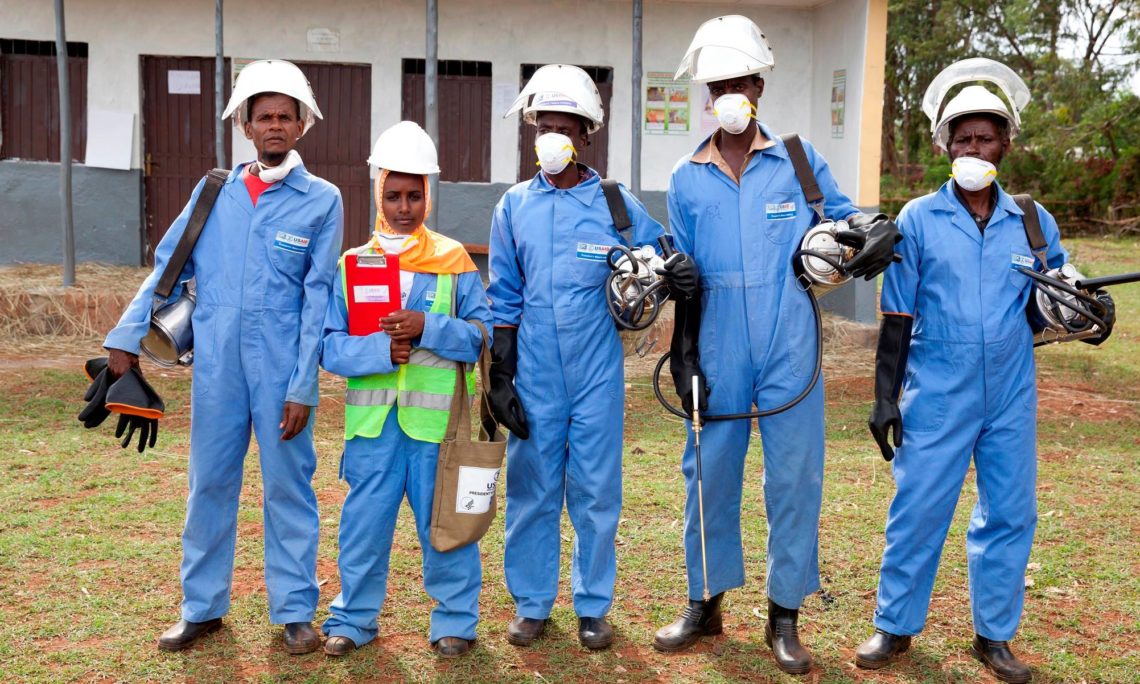 On World Malaria Day, the United States is proud to partner with all Ethiopians in your efforts to beat the disease. And we salute Ethiopia’s health heroes – doctors, nurses, community health workers, lab technicians, mosquito sprayers, pharmacists, researchers, drivers, warehouse workers, data entry specialists and many more – who work every day to safeguard health, prevent illness and assist those in need.

When a young child wakes up lethargic and feverish in many rural communities, mothers often turn to health extension workers who use a rapid finger-stick test to see if malaria parasites are present in the child’s blood. And if the test is positive, health workers administer an antimalarial treatment so the child can recover. As many villagers live far from health clinics and hospitals, health extension workers are often the first, and sometimes only, providers of health services like diagnosing and treating malaria. In order for a child sick with malaria to receive appropriate care in a remote village, multiple country-led and managed components, spanning all levels of the health care system, must be well-functioning and coordinated.

Despite being entirely preventable, malaria is a leading cause of sickness and death across much of sub-Saharan Africa, and in Ethiopia. The disease disproportionately impacts the rural poor  and traps families in a vicious cycle of disease and poverty.

Since 2008, the U.S. President’s Malaria Initiative (PMI), led by the U.S. Agency for International Development (USAID), and implemented together with the U.S. Centers for Disease Control and Prevention (CDC), has partnered with Ethiopia to diagnose and treat malaria more effectively, and provided protective measures for millions of people.

With the Ministry of Health and the national malaria control program in the lead, in close collaboration with many partners and countless communities in Ethiopia, PMI has sustained its focus on scaling up proven, cost-effective interventions. As a result, over the past decade, we have worked together to procure and distribute 30 million insecticide-treated bed nets, 9 million rapid diagnostic tests, and 15 million treatment doses of malaria medication since the inception of this initiative. Millions of people have benefitted from this support and data from nationwide surveys indicate significant improvements in the reach and impact of malaria control interventions in Ethiopia.

Simultaneously, and of equal importance, PMI is strengthening health systems by building the skills of more than 27,000 health workers to diagnose and treat malaria cases more effectively and working with Ministry of Health leaders to manage malaria control activities with increasing self-reliance.

After more than a decade of the U.S. partnership with Ethiopia under PMI, malaria elimination is now considered a realistic long-term goal. Mortality among children under the age of five has decreased by 46 percent since 2005. This is a direct result of collective investment and action by the government, communities, donors, and development partners. However, while substantial progress in scaling up malaria control interventions continues, nearly 70 percent of Ethiopians are at risk of contracting the disease, as evidenced by the 1.7 million reported cases of malaria last year.

That is why we cannot lose momentum against the “ancient killer.” We must sustain and build on our achievements. Diverting our focus will result in a resurgence of malaria illness and death, risking the extraordinary progress achieved to date and the substantial investments made thus far.

A great tragedy and consequence of poverty is that women and children die from diseases that we know how to treat – diseases that are entirely curable. Malaria is at the heart of sustainable development and it brings many of the different dimensions of development together. Malaria control is central to improving child survival and maternal health, and contributes substantially to eradicating poverty. Malaria affects the health and economic growth of nations and individuals alike. Malaria is bad for business, where the disease is responsible for employee absenteeism, increased health care spending, and decreased productivity. Education cannot thrive as long as malaria is in the equation. According to the World Bank, malaria leads to 50 percent of all preventable school absences in Africa.

Fighting malaria is a smart investment to protect health, create opportunity, and foster economic growth, especially among the poor. So as we commemorate this World Malaria Day, we celebrate our successes, but also recognize that there is much work yet to be done. In the spirit of this year’s theme, “Ready to Beat Malaria,” let us all recommit our collective efforts to eliminate this deadly disease once and for all. In doing so, many more children and families across the country will have a better chance to live healthier, happier, and more prosperous lives.