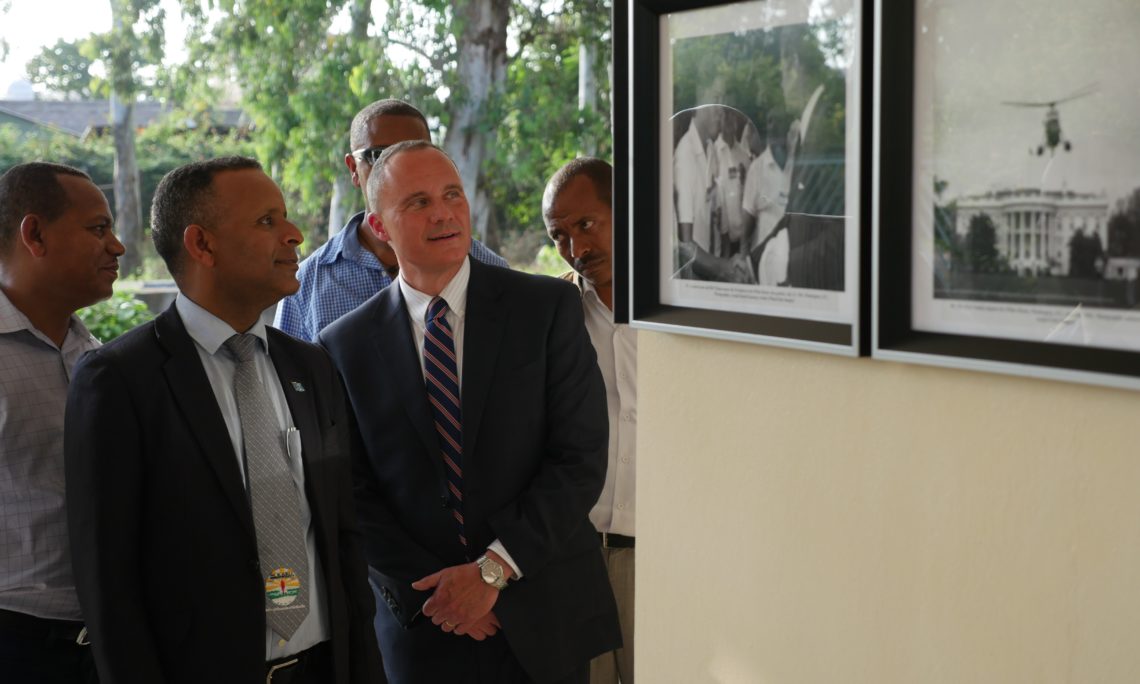 Bahir Dar, Ethiopia, October 11, 2017: The United States Embassy partnered with Bahir Dar University to bring a photo exhibition marking the 100th anniversary of the birth of President John F. Kennedy.  The exhibition, which commemorates President Kennedy’s life and work, will be open to the public at the Bahir Dar American Corner located at Geneme Library near Fasilo High school from October 11-18, 2017 as part of global JFK 100 Centennial Celebrations.

U.S. Ambassador Michael Raynor delivered remarks at the opening of the exhibition, highlighting the work that the United States is doing to prepare Ethiopian youth to achieve a brighter future for their country.  The Ambassador also noted that President Kennedy’s legacy is alive and well in Ethiopia through the activities of the Peace Corps and USAID, both of which he brought into existence during his presidency.

Ambassador Raynor specifically highlighted projects like the recently concluded Girls Can Code, which provided 240 high school girls from five Ethiopian cities with skills in computer science and the confidence to pursue their interests at the university level.  He noted USAID’s “Building the Capacity of Youth” project, which provides unemployed and underemployed youth ages 15 to 29 in rural areas with tools to increase their income and economic self-sufficiency.  And he focused on the Young African Leadership Initiative (YALI), the U.S. government’s signature effort to invest in the next generation of African leaders.  Today’s event coincided with the end of the application process for YALI’s 2018 Mandela Washington Fellowship, which provides six-weeks of academic and leadership training in the United States and contributes to building a network of future African leaders that spans the continent.

As part of the celebration of President Kennedy’s legacy, Bahir Dar University will host a youth conference and panel discussion on themes including volunteerism, science and technology, education, and entrepreneurship on October 12, 2017 at the university.

After the exhibition concludes in Bahir Dar, it will travel to the cities of Hawassa, Jimma, and Dire Dawa, before being installed for permanent exhibition at the John F. Kennedy Library at Addis Ababa University.

Born in Brookline, Massachusetts on May 29, 1917, President Kennedy was the youngest president ever elected to office and is remembered for his passionate advocacy for access to education, encouraging youth to take a greater role in serving their country, and for highlighting the importance of science and technology, particularly through his visionary goal of putting a man on the moon.

Kennedy’s administration coincided with a golden age of photojournalism in America. No single politician was photographed more than Kennedy—from his first congressional bid as a decorated war hero in 1946, his fairytale marriage to Jacqueline Bouvier in 1953, his run for the White House in 1960 and role as commander in chief, to the tragedy of his death in Dallas in 1963.

As part of the “JFK 100 Centennial Celebration,” the Kennedy Presidential Library and Museum is spearheading a series of events and initiatives across the nation aimed at inspiring new generations to find meaning in the enduring values that formed the heart of the Kennedy presidency— courage, freedom, justice, service and vision. In Washington, the exhibition is part of a citywide celebration with other cultural organizations including the John F. Kennedy Center for the Performing Arts, the Smithsonian’s National Portrait Gallery and the Smithsonian’s National Museum of American History, the White House Historical Association and the Newseum.