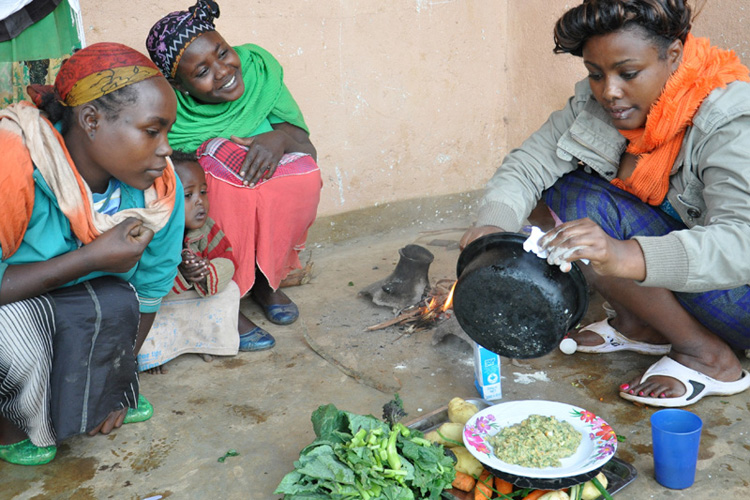 Addis Ababa, Ethiopia, December 29, 2016 – The U.S. Agency for International Development, in collaboration with Save the Children and the Government of Ethiopia, announced a new multi-sector nutrition activity known as Growth Through Nutrition, which will build on the accomplishments of USAID’s Empowering New Generations to Improve Nutrition and Economic Opportunities activity, or ENGINE. The Growth Through Nutrition activity supports Ethiopia’s efforts to improve the nutritional status of women and young children in four regions—Amhara, Oromia, SNNP and Tigray—focusing on the first 1,000 days.

Through ENGINE, USAID provided nutrition and health services to 5.6 million children under the age of five, trained 26,300 people in child health and nutrition and 107,000 individuals in nutrition sensitive, short-term agricultural productivity, and directly benefited 15,070 most vulnerable households with nutrition sensitive livelihood interventions in the Amhara, Tigray, SNNP, and Oromia regions. USAID’s key achievements through ENGINE were as follows:

Growth Through Nutrition will expand and strengthen USAID’s effective and promising interventions, as well as make significant investments in the agriculture and WASH sectors to further enhance a multi-sector approach to reduce stunting in Ethiopia. The activity will develop and implement strategies to increase the reach and sustainability of interventions to the household level, increase ownership and involvement of government, collaborate with the private sector and other USAID activities to maximize impact, and introduce mechanisms to protect poor households’ investment gains or assets during shocks such as drought.

Growth Through Nutrition will benefit an estimated 14 million people in 100 targeted woredas (districts) through improved health services; increased production and availability of quality food, WASH products and services; increased access to safe water; and social behavior change and communication for nutrition. The activity will reach more than one million “1,000 Days” pregnant women and children under two years old with direct support to prevent stunting. Additionally, it will expand USAID’s work with most vulnerable households to increase their access to seeds, poultry, and small livestock for up to 28,000 beneficiaries.

USAID’s lead partner for Growth Through Nutrition, Save the Children, is implementing this activity in cooperation with the Feinstein International Center and the Friedman School of Nutrition Science and Policy at Tufts University, Jhpiego, World Vision, Population Service International, Land O’ Lakes Inc., the Manoff Group, and several local partners.