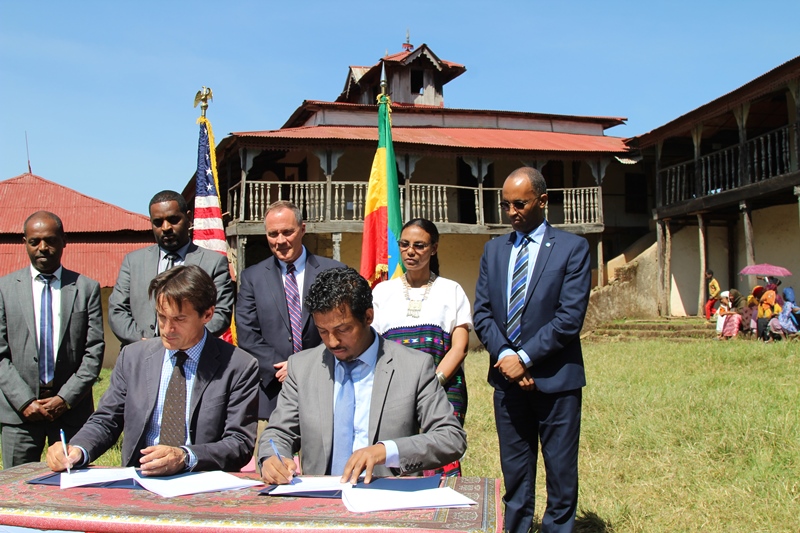 The U.S. Ambassador to Ethiopia Michael Raynor took part in a launch ceremony for a project under the U.S. Ambassador’s fund for Cultural Preservation (AFCP) aimed at restoring the Aba Jiffar Palace, one of the most important cultural heritage sites in the Oromia Region, and beyond.

The U.S. government, through the AFCP, is providing $125,000 through the World Monuments Fund for the restoration project, with additional funds, approximately $220,000, provided by the Ethiopian Authority for Research and Conservation of Cultural Heritage (ARCCH) and the Oromia Culture and Tourism Bureau.

Launching the project in Jimma today, Ambassador Mike Raynor remarked: “As much as the rock-hewn churches of Gheralta and Lalibela, the walled city of Harar, the fortified settlements and terraces in Konso, and the castles of Gondar, the Aba Jiffar palace represents a history that made Ethiopia a country of incredible cultural diversity, and it reminds us that such diversity should be cherished as a source of shared pride.”

“Together, these funds will make it possible to undertake the most comprehensive conservation project ever at Aba Jiffar Palace, including not only urgent timber conservation, but also significant work on masonry elements, drainage, roofing, fixtures, and fitting,” he added.

In recent years, AFCP has supported various projects in Lalibela – most recently the restoration of Bete Golgotha Mikael and Bete Gabriel Raphael – also under the stewardship of the World Monuments Fund.

This new project at Aba Jiffar Palace is not only significant in own right, but also as a symbol of the ever-growing and true partnership between the United States and Ethiopia in heritage conservation.

The latest funding will also go toward developing an on-site museum, landscaping, and preparing a maintenance plan to ensure the long-term integrity of the incredible structure.

The restoration project supports a broader vision of creating a new cultural destination in the region that links the heritage of coffee, Aba Jiffar Palace, and Jimma into a broader context that reflects the extraordinary history, culture, and potential of this extraordinary part of Ethiopia.

The project will also support a team of timber craftsmen who will be trained and empowered to design and implement a maintenance plan to care for the palace, and eventually other historical sites in Ethiopia, well into the future.