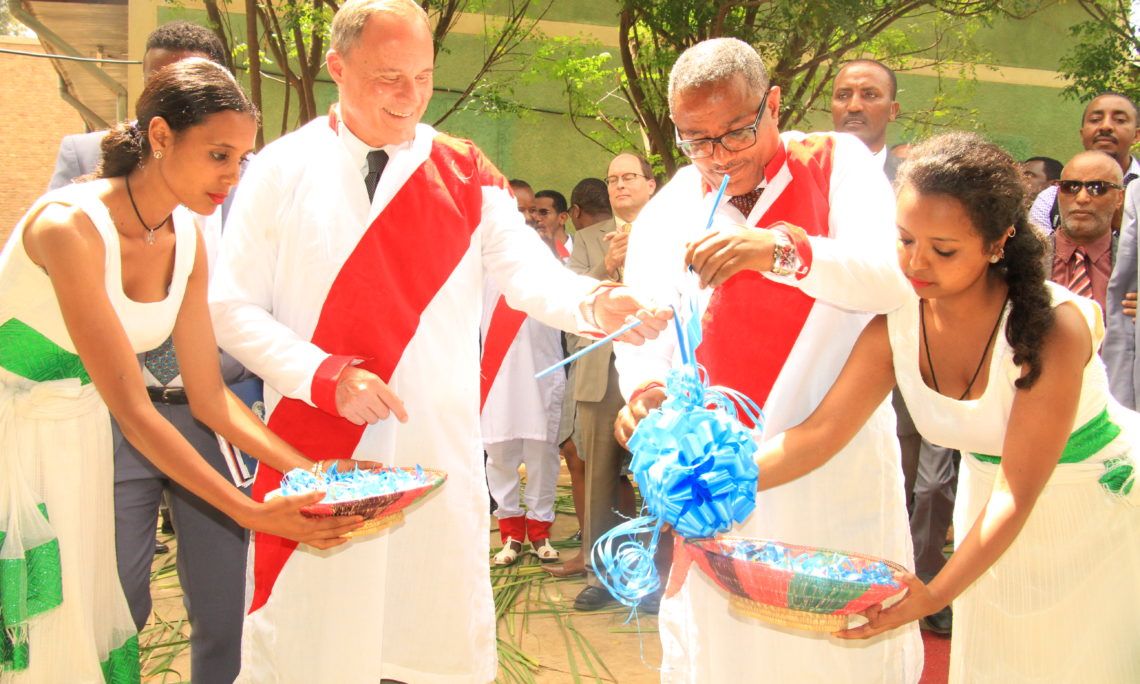 The project is the result of a joint effort of the Amhara Regional Health Bureau and Amhara Public Health Institute (APHI) supported by the United States Government through technical and financial support provided by the U.S. Centers for Disease Control and Prevention’s (CDC) PEPFAR and Global Health Security programs.

The Amhara Public Health Institute will focus on building the capacity to rapidly identify and respond to public health threats in the Amhara region.  The EOC, as a key component of the institute is focused on creating unified incident management system that will serve as a springboard for an expanded EOC network across Ethiopia to ensure better coordination and responses between regional and national health institutions.

At the inauguration, Ambassador Raynor said, “The goal of this Amhara Public Health Institute is to perform critical functions of disease detection, risk assessment, and response to outbreaks – none of which is possible without a capable workforce. The establishment of the Emergency Operation Center is another important step for ensuring the effectiveness of our collective investments.”

This initiative is part of the U.S. Government’s ongoing commitment to strengthening infrastructure for health systems and to combat HIV/AIDS in Ethiopia.  Through CDC, the United States has provided financial and technical assistance to the Ethiopian government for more than 15 years, improving national, regional, and facility-based laboratories, and supporting programmatic and surveillance activities that have helped stem the spread of HIV/AIDS, sexually transmitted infections, tuberculosis, along with existing and emerging outbreaks.

Ambassador Raynor highlighted that the inauguration coincides with the 15th anniversary of the creation of the PEPFAR program and congratulated Ethiopia for significantly reducing the number of new cases annually.  The Ambassador hailed the milestone, adding that “the country is on the verge of controlling the HIV epidemic, one of the first PEPFAR-supported countries in Africa to do so. Today, with PEPFAR assistance, over 450,000 people in Ethiopia are receiving life-saving treatment at over 1,000 sites, marking tremendous progress toward the ultimate goal of identifying 90% of all cases, ensuring that 90% of those cases receive treatment, and ensuring that 90% of treated cases achieve viral suppression.”

This year, we mark 15 years of the U.S. President’s Emergency Plan for AIDS Relief, better known as PEPFAR.

Thanks to high coverage of life-saving anti-retroviral treatment among people living with HIV, and other prevention measures, Ethiopia has significantly reduced the number of new cases annually.  Today, with PEPFAR assistance, over 450,000 people in Ethiopia are receiving life-saving treatment at over 1,000 sites, marking tremendous progress toward the ultimate goal of identifying 90% of all cases, ensuring that 90% of those cases receive treatment, and ensuring that 90% of treated cases achieve viral suppression.

The United States Government committed 1.3 million Ethiopian birr for the renovation of the EOC at the Amhara Public Health Institute. Ambassador Raynor was joined by H.E. Gedu Andargachew, President of the Amhara National Regional State, and Dr. Abebaw Gebeyehu, head of Amhara Regional Health Bureau, along with representatives from the Federal Ministry of Health, the U.S. Embassy, and other key public health stakeholders.