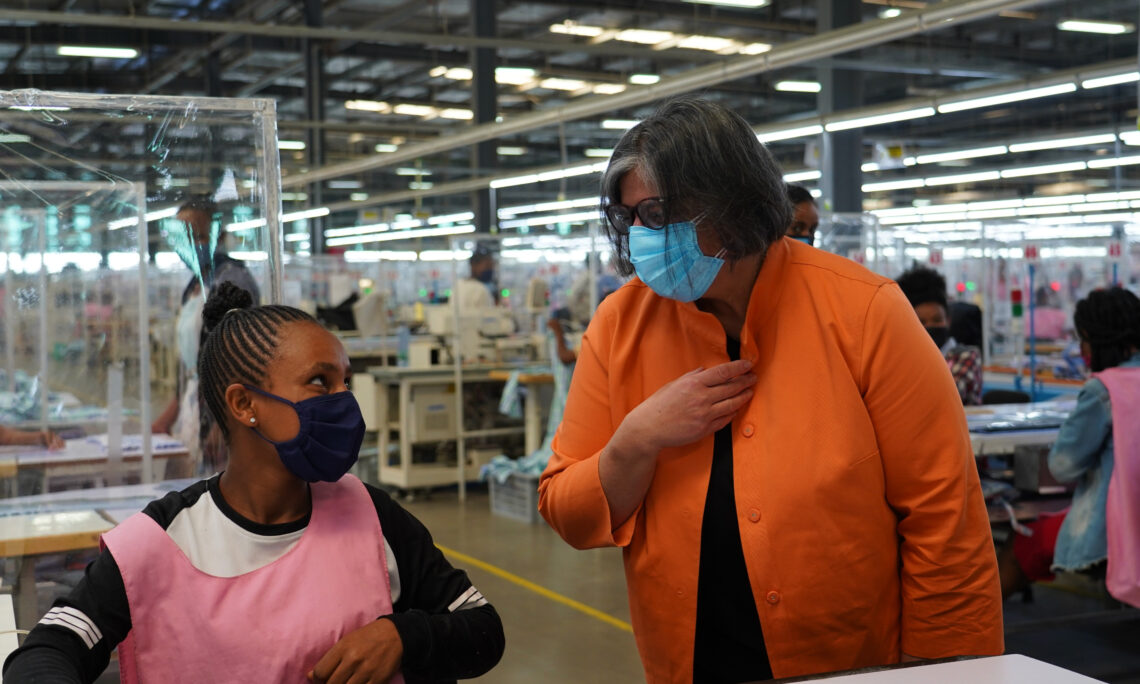 Hawassa, October 29, 2021 – Continuing her travels across Ethiopia, U.S. Ambassador Geeta Pasi visited Hawassa.  During her daylong visit, the Ambassador met with business leaders, workers, academics, and journalists to talk about U.S. government programs and as well as to hear from them about their experiences in their respective fields.

The Ambassador visited the Hawassa Industrial Park, the first sustainable textile and apparel industrial park in Africa, where she had the opportunity to meet with Hibret Lemma, CEO of Hawassa Industrial Park Investors Association (HIPIA) and talk to HIPIA members. The workers told the Ambassador the African Growth and Opportunity Act (AGOA) and other support from the United States had positively impacted their lives.  She also spoke with women who are beneficiaries of USAID’s Worker Wellness Alliance about the program’s efforts to help women integrate into formal work and life in the surrounding communities.

Ambassador Pasi underscored that the United States and Ethiopia have a shared goal to ensure that the people of Ethiopia continue to benefit from AGOA. The United States stands ready to work with the government to this end.

The Ambassador was honored to have an opportunity hear from young Ethiopians working to bring about peace and prosperity in their country, in part, by partnering with USAID’s Office of Transition Initiatives. Student leaders from Hawassa University were joined by Dr. Debrawork, the Dean of the College of Law and Governance, to share their efforts to promote peace on campus and in communities.

Ambassador Pasi also visited Hawassa University, with which the U.S. Embassy has had a long and very fruitful relationship, including English language education and journalism, programs that benefit students and the people of Ethiopia.  She spoke with University President Dr. Ayano Berasso, Vice President Dr. Tafesse Matios and Vice President Dr. Fiseha Getachew, about their work to prepare the next generation for the future.

Since taking on her role as U.S Ambassador to Ethiopia, Ambassador Pasi has visited the regions of Amhara, Sidama, Somali, SNNP, and Tigray to build upon the valued partnerships between the people of our two countries. The Ambassador was thrilled to have the opportunity to visit with the people of Hawassa.  In a statement to the press at the end of the day, she reaffirmed U.S. support for continued partnership with Ethiopia.  Since 2000, the African Growth and Opportunity Act – AGOA – has been a foundational element of U.S. economic and commercial engagement with Africa. The legislation that created AGOA established criteria for eligibility, which are reviewed annually. These criteria include the requirement that a beneficiary country not engage in gross violations of human rights.  The United States is committed to our partnership with Ethiopia.