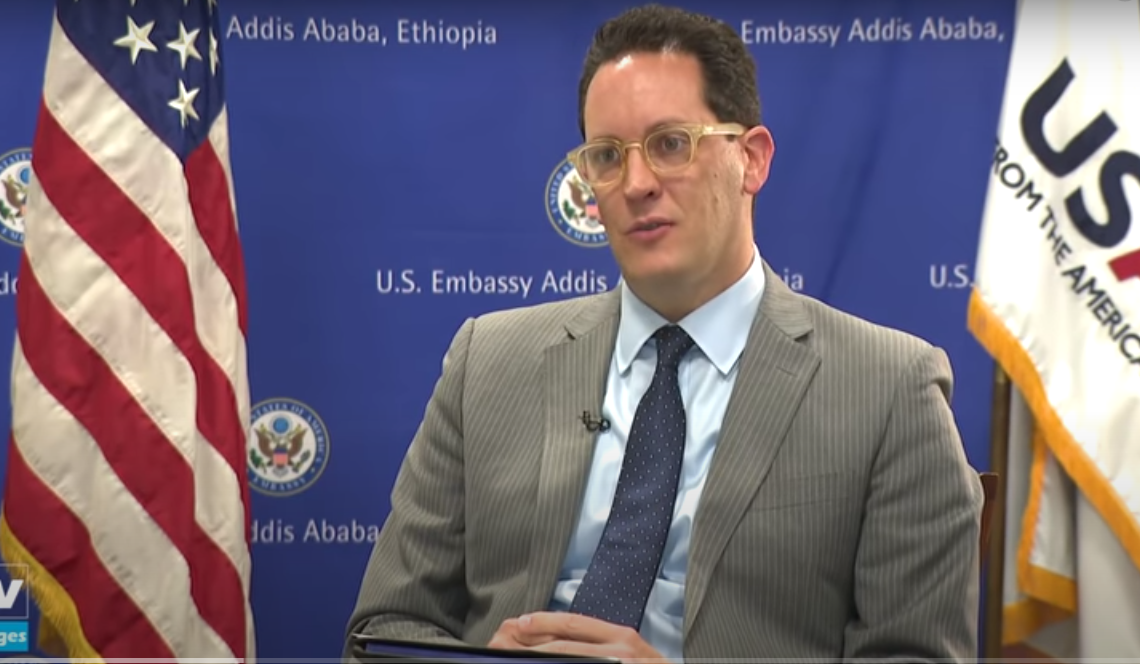 EBC: Mr. Sean Jones, Mission Director of USAID to Ethiopia, thank you for having me.

EBC: U.S. Embassy recently issued a statement rejecting any accusation that USAID has been diverting aid to the TPLF fighters. I wonder if you can tell me what triggered you to issue that statement?

Sean: Of course and thank you for that question. Every time we are presented with an opportunity to share a little bit of our program, it helps us to clarify why we’re here, why the United States is investing so much money, time and love and passion into Ethiopia, to benefit our Ethiopian brothers and sisters.  Of course, the United States government was very concerned about the recent, I think misrepresentations, and inaccurate reporting across some of the state-run media channels about USAID information, about USAID assistance in the country, and we wanted to make sure that Ethiopians got the other side of the story. That they heard directly from us that in no sense, and in no history of humanitarian assistance here in Ethiopia, has USAID ever provided any kind of food or drugs or any other kind of assistance to TPLF or to armed groups in Ethiopia.

EBC: So, if USAID did not allow them to access aid, how could the TPLF fighters get your aid?

Sean: Sure. So, I think that is a great opportunity to clarify. And unfortunately, in a time of war, in conflict, there are ways that armed groups get food and non-food items from humanitarian actors, of course. We took this allegation very, very seriously. So, we know that we have not delivered any high energy biscuits in the Tigray region, since February of 2021. But, as a result we also… then started thinking to ourselves, how did these TPLF soldiers get access to USAID food, and maybe non-food somewhere. Well, unfortunately I can’t tell you how that happened. But I will tell you, in conflict zones, I think there are probably three reasons, three ways that armed groups and soldiers might get access to humanitarian supplies. First, number one is that, often, food is sold to soldiers. Maybe even to other citizens. And so, everybody who travels around the country in Ethiopia, going to rural and even in the urban local markets, you see a lot of humanitarian supplies that are actually being sold. Sometimes by people, maybe they needed cash instead of the food that month so they are selling their food assistance that might have been given to them, or non-food assistance, but you see it everywhere around the country. So that is one way that it could have been. Another way is that of course we know that some citizens are sympathetic to, in this case, the TPLF. Maybe they gave their food to the soldiers. And then of course third, I think is the worst thing that could happen, is soldiers and armed groups come in and they steal that food, or non-food, from citizens. That is absolutely, the worst-case scenario, is when the people who are so needy and were recipients of assistance, then ultimately things are taken away from them. The food is taken right out of their children’s mouths. That is when we are facing the worst of what armed groups can do in this country. Unfortunately, we are seeing a situation in which, particularly in Amhara right now where the TPLF has expended their very aggressive fight, and

we know for fact, much like the Eritreans were doing months ago in Tigray, in Amhara now, we now know that the TPLF has, in every town they’ve gone into, they looted the warehouses, they’ve looted trucks and they have caused a great deal of destruction in all the villages they have visited*. And it’s a great concern for humanitarians. Humanitarians have fled for their lives, again throughout the nine months of the conflict, throughout Afar, Tigray, and Amhara. Humanitarians are the ones at the center of the conflict. They are the first ones to go in and provide life-saving assistance, and only when their lives are threatened or when the things are stolen or when their building are looted or burned down are they the ones to leave. And unfortunately, we have also seen quite a few, I think it is fifteen now of our humanitarian brothers and sisters have lost their lives, in the past nine month of conflict.

EBC: Do you believe that the TPLF fighters have been stealing aid from your organization?

Sean: I do believe that TPLF has been very opportunistic. Maybe they are stealing from citizens, we don’t have proof of this of course. What we do have proof of is that several of our warehouses have been looted and completely emptied in the areas, particularly Amhara where the TPLF soldiers have gone into. Yes, we know that is a fact.

Sean: Well, to be honest throughout nine months of conflict all of the warning parties have been stealing aid. Months ago, when the federal forces aligned with Eritrean forces were in Tigray, there was a lot of theft that was going on, that was occurring. We came out when we had proof and when we had evidence, we came out and first we would speak with the government of Ethiopia. We speak with our counterparts and our colleagues in the Ethiopian government. And usually, we were able to resolve a lot of those issues, between governments. We now know, because again new facts have arisen, that in recent weeks some of our warehouses have been looted and emptied by advancing TPLF troops, especially in Amhara right now. It is not that we have disagreed in the past, it is just that the United States doesn’t make comments, first of all we don’t make comments about everything. Second of all, we don’t make comments based on rumor and accusations, we make comments, and we call out misdeeds when we know that we have facts that support what we want to say. In this case we are very confident that in recent weeks we have seen TPLF soldiers emptying some of the warehouses.

EBC: USAID in the statement indicated that it is feeding 7% of the Ethiopian people. Can you highlight the overall effort made by your organizations in the past nine months or so?

Sean: Of course and thank you for that. I always love to talk about the history of U.S. assistance here, because frankly this is the largest aid program in the entire world. It is not just because Ethiopia is going through a challenging time. It is because Ethiopia is absolutely one of our finest and most important partners anywhere in the world, and that is why we invest in Ethiopia. So, for instance, just in the last five years, we have invested over 4.2 billion dollars here. Some of which is humanitarian assistance, but a lot of it is development assistance. We are working hand in hand with our government partners and the Ethiopian people, in places like Somali,

Benishangul-Gumuz, Gambella, Oromia, Amhara, and even Tigray to make advancements for the benefit of people here. So, we have a very long-standing history in Ethiopia. Of course we are providing a lot of humanitarian assistance. I think what we are seeing right now is a result of the U.S. government and the American people’s commitment to the Ethiopian people when Ethiopian people need a helping hand the most. So, for instance, in places that are outside of Tigray we are providing emergency aid to 3.5 million Ethiopians. Again, this is outside of Tigray and the northern conflict. This is in places like Benishangul-Gumuz, and Oromia, Somali, SNNP, where communities are still struggling with conflicts, drought, it could be desert locust, floods, whatever it might be. We have been providing assistance for a long time, that is 3.5 million people. We also are a big contributor to the Government of Ethiopia led Productive Social Safety Net Program, so the PSNP, we support 1.6 million people, trying to escape from poverty. And then of course, as most are aware because of the conflict right now, we are providing food support to 5 million people in the north right now. This is of course inside of Tigray, but also now in Amhara and Afar. And we will continue to support Ethiopians during their time of need.

EBC: Do you agree with the notion that the relationship between Ethiopia and the U.S. is deteriorating?

Sean: I hate to use that word. I think there is some strain or there is some stress in our relationship right now. It’s really important I think for the United States as a partner of Ethiopia, we are a committed, passionate partner about our relationship with the Ethiopian people. As a partner, sometimes we have to raise our voice. Sometimes, like in a good marriage, sometimes we have to say what we’re feeling at that moment. We have to provide our advice because maybe we have been through this already. And maybe we see decisions that are being made, in our partner, in Ethiopia in this case, that we think might not be in Ethiopia’s best interest. And so, maybe if people look at it as a deterioration of the relationship; frankly it’s a very honest conversation.  I will tell you, my relationships with senior Ethiopian government officials have maybe never been better. I have honest clear communications with my colleagues in the Ethiopian government every single day to talk about ways that we can resolve things together. Unfortunately, we all are very distracted by what’s on Twitter or Facebook and what a lot of people on social media are talking about. That is not always the truth. And I think people need to make sure that they are trying to find the truth and when they are listening to the two sides of an argument.

Sean: Absolutely! My family and I live in Ethiopia, and we want nothing more than for all Ethiopians to have a very prosperous future. It is in the American people’s interest and the U.S. government’s interest that Ethiopia be a unified, stable and prosperous country for all of its citizens. But not just the citizens of today, the future citizens as well. USAID as an organization is thinking about how do we help our children in the future. 20, 30, 40 years from now, how do we help them become more prosperous? And I think as we go through this new year, I would say there’s two things that we need to really remember, is that when we think about the conflict, there is no benefit to anyone by continuing the kind of conflict that we see right now. As Ethiopians have taught me, when the elephants continue to fight, the grass will continue to be trampled. I think

the second point that I would call out is that this new year, in Ethiopia over 900,000 Ethiopian citizens are going to be facing famine. And some of those families are not going to survive past the new year. That is what my organization and my government and the American people are so committed to right now, is helping Ethiopians at their time of need.

*[Correction: This is a misstatement. While USAID has received reports of several towns that faced looting, it is inaccurate to say “every town”.]