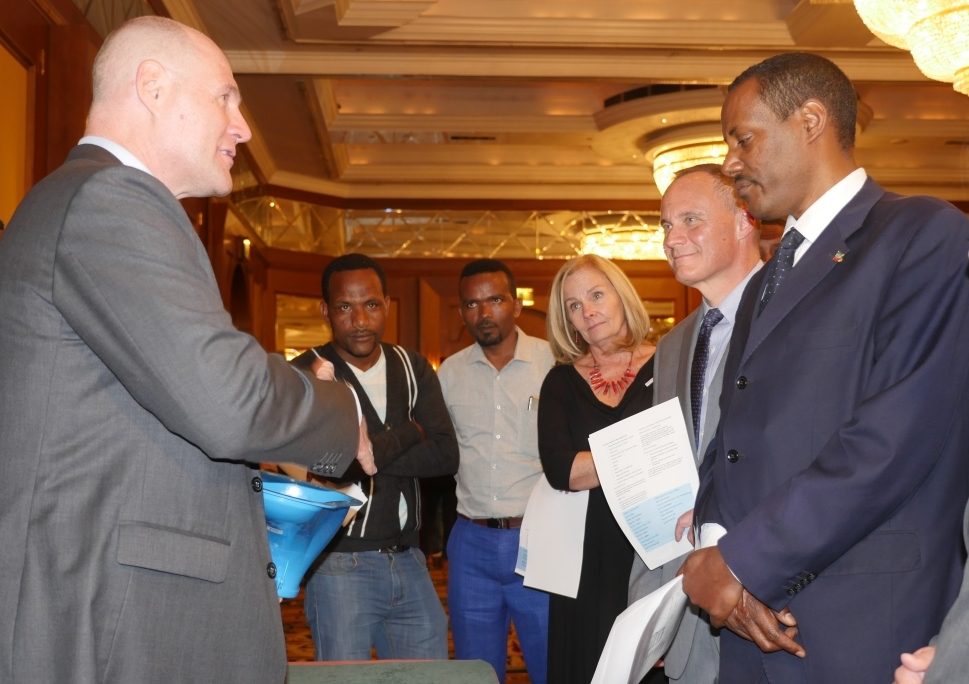 Distinguished Heads and Deputies of the Regional Health Bureaus

It’s great to see such a large turnout today.

I’m very honored and excited to take part in launching not one, but four USAID activities in cooperation with the Government of Ethiopia’s Health Sector Transformation Plan.

These new awards will improve primary health care services in both agrarian and pastoral regions and will expand access to safe water and sanitation.

And – almost as important – they will measure our success in doing so.

The United States Government is proud to partner with the Government of Ethiopia for a healthy, productive, and prosperous Ethiopia.

We are also proud to partner with our colleagues from the South Korean Embassy and the Korea International Cooperation Agency (KOICA) in this effort.

A healthy population is a critical building block for achieving any development goal.

Investments in a strong education system and a growing industrial sector are important, of course, but without a healthy population to educate and employ, everything else falters.

This is why the United States Government commits so much energy, and many resources, to supporting Ethiopia’s public health programs.

This investment is in addition to our other development, humanitarian, and emergency support programs.

The partnership between the United States and Ethiopia to improve maternal and child health, and to strengthen Ethiopia’s health care system overall, is more than 50 years strong, and it’s a partnership that has paid off spectacularly.

Over the past few decades, Ethiopia and its development partners have made remarkable progress in improving health outcomes for all Ethiopians.

Among these achievements have been reaching Millennium Development Goals 4, 5 and 6; reducing child mortality by two-thirds; cutting maternal mortality in half; and significantly reducing HIV and tuberculosis infections.

This progress accelerated with the introduction of the Health Extension Program 15 years ago, which brought health services closer to the communities that need them.

The Health Extension Program is now held up as a global model, and rightly so.

In addition to the 38,000 health extension workers now serving in more than 16,000 health posts through the country, the number of health centers has  increased as well — from 520 ten years ago to more than 2,800 today.

And community-based health insurance has reached over 16 million Ethiopians in just the four years since it was launched.

These and other incredible achievements were on display when the Government of Ethiopia hosted the third “Acting on the Call” Conference in August 2017, which focused on overcoming critical barriers to maternal and child survival.

I’m sorry I wasn’t here in time to attend the conference, but by all accounts it was a wonderful event, with over 500 participants from around the globe, and I congratulate the many of you in this room today who made this massive event such a success.

Yet despite the impressive achievements to date, I don’t think anyone in this room feels our work is done.

As Ritu, the head of USAID’s Health Office, explained a few moments ago, Ethiopia has reduced its fertility rate from 5.5 children in 2000 to 4.6 in 2016.

However, the population nearly doubled in that time frame, and nearly half of Ethiopia’s citizens are under the age of 15.

And 13 percent of Ethiopian girls between the ages of 15 and 19 have had children or are pregnant.

There is more work to be done in preventing the deaths of Ethiopia’s youngest and most vulnerable citizens.

More women receive ante-natal care than before – up from 27 percent in 2000 to 62 percent now – but only 20 percent receive care in the first trimester; only one-third get the recommended four or more ante-natal care visits; and more than seventy percent of deliveries are still occurring at home.

Pregnant women need to be seen earlier and more often by skilled healthcare providers during pregnancy.

And too many children are still chronically undernourished, with stunting rates of 38 percent nationwide and rates as high as 46 percent in some regions, including Amhara.

These high rates of stunting will prevent many of Ethiopia’s children from reaching their full capacity as productive and healthy citizens.

Ethiopia has been certified polio-free, but we need to maintain vigilance against the wild polio virus to sustain that certification, and we need to do more to immunize Ethiopia’s children against other childhood killers such as measles and rubella.

The Health Sector Transformation Plan has set an ambitious target of achieving health outcomes equivalent to middle income countries by 2025.

It plans to do so through improved equity and quality in healthcare; by supporting the woreda to be transparent, efficient government units that can respond fully to community needs; through improved data and training; and by fostering caring and respectful healthcare providers.

The four awards we’re celebrating today have been designed to support the laudable goals of the Health Sector Transformation Plan.

Ritu provided an excellent overview of these activities, and you will have an opportunity to learn more about them during the marketplace, including:

“Transform: Primary Health Care”, the activity that the Korea International Cooperation Agency (KOICA) is contributing to, which will focus on regions.

“Transform: Health in Developing Regions,” which will support public sector primary care in pastoral areas, many of which have fragile health systems and are prone to natural disasters and recurrent humanitarian challenges.

“Transform: WASH,” which will address access to safe water and improved hygiene using a market-based approach, in partnership with both the Ministry of Health and the Ministry of Water Resources, Irrigation and Energy through the OneWASH National Program.

And finally, “Transform: Measuring, Evaluation, Learning and Adapting,” which will collect data and build an evidence base to determine which models work best.

I hope that these programs will be a catalyst in the days ahead for all of us to contribute to improving the health, lives, and livelihoods of all of Ethiopia’s citizens.

Before closing, I’d like to make one quick observation.

While visiting Ethiopia during his first trip abroad as the new head of USAID, Ambassador Mark Green said something very clear and insightful.

This is what he said:  “The purpose of foreign assistance is to end its need to exist.”

Our partnership with South Korea is a perfect demonstration of how this can work.

From the 1950s until 1980, the United States provided health, economic growth, and other assistance to support the South Korean government’s development agenda.

I find it very inspiring that today, South Korea and the United States are working hand-in-hand support Ethiopia in realizing its own development agenda.

On behalf of the United States Government, I want to thank the Ministry of Health once again, and the regional health bureaus, for their visionary leadership that has made Ethiopia such a positive global model for community health.

Thank you all for being here today, and for your commitment to a healthy, productive, and prosperous Ethiopia.