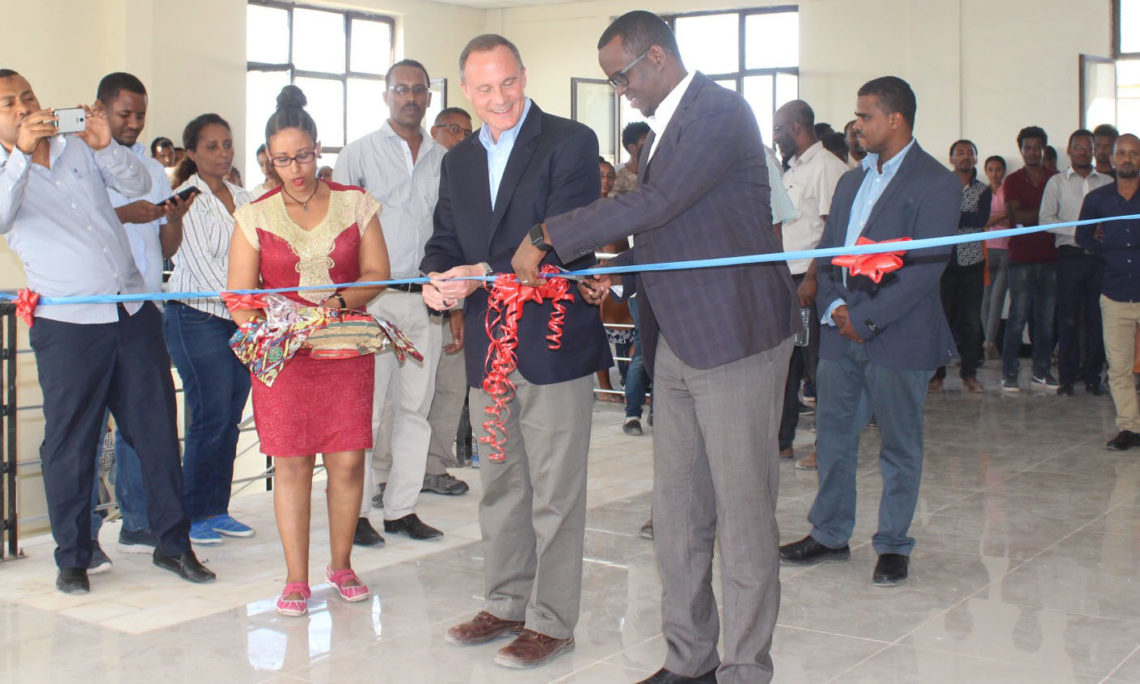 I’m very excited and honored to be here today.

Thank you, Dr. Yitbarek, and Dire Dawa University, for supporting both this exhibition and the youth conference that will be held tomorrow morning.

Dire Dawa is the fourth city in Ethiopia to host this photo exhibition reflecting the life of President John F. Kennedy.

And as the exhibition has done elsewhere, I hope it will inspire conversations in Dire Dawa about the role that youth can play in society.

President Kennedy was still a youth when he was elected to the United States Congress at the age of 30.

He was still quite young when he was elected to the Senate at the age of 36.

He was the youngest elected president in U.S. history, at the age of 43.

And he was only 46 when he was killed.

President Kennedy had a tremendous impact on U.S. society, despite — or perhaps because of — his young age.

He had those very important characteristics that we tend to associate with youth:  hope, energy, and vision.

He believed that a better future was possible for the United States; and investing in and empowering America’s youth was a large part of his plan to achieve it.

Today is the International Day for Volunteerism – a fitting moment to discuss President Kennedy’s legacy.

It’s a question that’s no less relevant today, and it’s as relevant beyond U.S. borders as it is within.

The Peace Corps is a part of President Kennedy’s legacy that is alive and well in Ethiopia.

He created it in 1961, very much in the spirit of volunteerism.

Since the Peace Corps began, over 225,000 Americans have served as volunteers in 141 countries.

Since 1962, nearly 4,000 Peace Corps Volunteers have served here in Ethiopia, working with young people in villages and towns across the country, and sharing valuable skills and experiences to build stronger, more resilient communities.

Giving our time to help others is something each of us can do.

So in that spirit, I encourage Ethiopians, particularly young people, to find a way to help someone else.

It could be as simple as reading a book to younger students, organizing a neighborhood clean-up, or helping a friend study for exams.

All of these small actions add up when many people take part.

Recently we’ve seen Ethiopian youth, including here in Dire Dawa, speak up and seek ways that they can make a difference.

Last week, we were closely following developments involving student protests at a number of universities.

From what we know, they have largely been able to proceed peacefully.

Peaceful expression can play an important role in shaping societies.

In the United States, the time period when President Kennedy was president is still remembered for the role that peaceful protest played in shaping the country.

Our Civil Rights Movement saw Black Americans and other elements of U.S. society strive for all Americans to have full access to the rights and privileges of their citizenship.

The Movement was defined by courageous but peaceful protest — by people working together to challenge the inequalities that were built into our society and our laws.

Nothing happened overnight — and even now there are challenges we continue to struggle with — but the Civil Rights Movement did bring change.

And I think it succeeded for several reasons.

First, while some protests did become violent, with tragic results, it was peaceful protest that opened minds, and that allowed our society to evolve toward greater fairness, justice, and opportunity for all citizens.

Also, the movement had very clear goals and a very clear message; it took the moral high ground; and it ultimately strove to strengthen, not weaken, the well-being of the country and its citizens.

So what I would suggest to Ethiopian youth who are seeking to promote your interests and build up your country is to stay the course, use peaceful expression to send your message, and work together to be as clear and constructive as possible about your goals, your messages, and the outcomes you ultimately wish to achieve.

Talk to each other, and to others who can help shape your society.

Help to build an appreciation for peaceful and respectful dialogue as the best way to build understanding, resolve differences, and overcome challenges.

The value of peaceful dialogue calls to mind another of President Kennedy’s legacies.

In 1961, he signed the order creating USAID, to end poverty and help build resilient and democratic societies capable of building a better future on their own.

USAID remains focused on that effort today, including a range of programs that specifically work to strengthen the capacity of Ethiopia’s youth.

For example, our Sustained Dialogue Activity aims to help youth create a culture of trust and collaboration to increase resilience to events that might otherwise trigger misunderstandings or even unrest.

My goal as Ambassador, and the goal of the United States in Ethiopia, is to help all Ethiopians achieve a better future.

A prosperous, strong, stable, resilient, and politically inclusive Ethiopia is in the best interests of Ethiopia, and Ethiopians.

It’s also in the best interests of the United States and the world as well, so that Ethiopia can remain a durable and strong partner for us in the region and beyond.

The United States remains a steadfast partner to Ethiopia, and we put our money where our mouth is, spending almost $1 billion dollars each year on development and humanitarian partnerships that focus largely on strengthening the health, education, well-being, and capacity of Ethiopia’s young people.

Ethiopia cannot move forward if its young people are left behind, so the more we can do together to build a better future for Ethiopia and for you, its next generation of leaders, the better.

Thank you all for coming, and enjoy the exhibition.