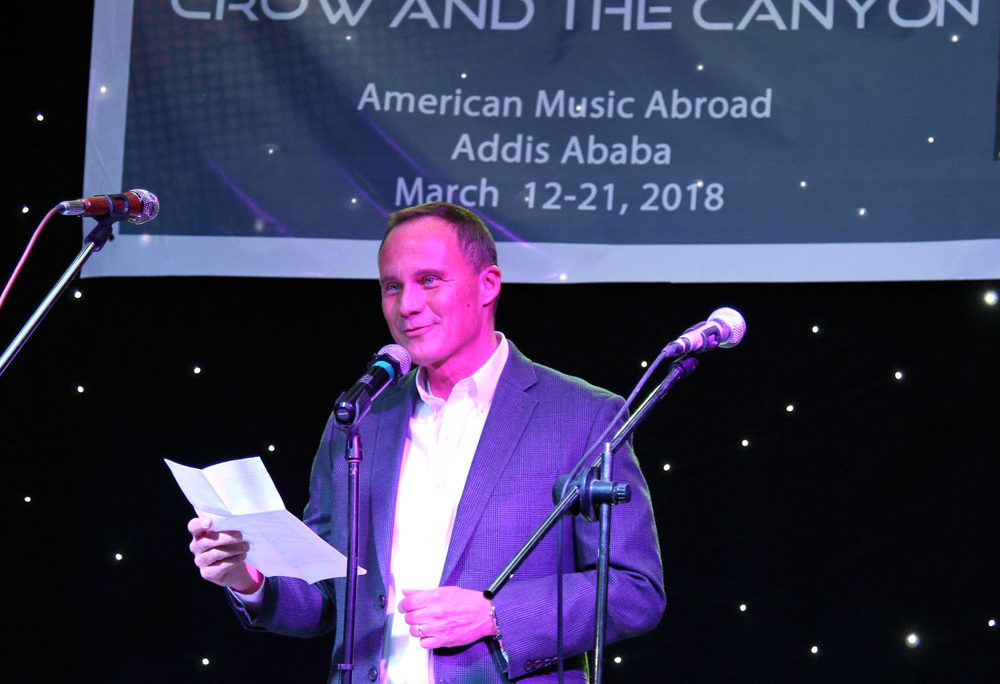 Thank you very much!

I’m really happy to join Ambassador Mary Beth in welcoming you all to tonight’s modern American bluegrass concert by Crow and the Canyon.

And we’re very honored and grateful to have Her Excellency Ambassador Birtukan, Director General for the Americas at the Ministry of Foreign Affairs, here tonight.

Crow and the Canyon have come to Ethiopia all the way from Portland, Oregon on the U.S. West Coast, and it’s great to have them here.

The members of Crow and the Canyon have spent the last ten days traveling Ethiopia, offering workshops to music students and sharing the unique sounds of bluegrass.

They’ve come to Ethiopia at an interesting moment in the country’s political and security dynamics, and before they came, my Embassy colleagues and I asked ourselves whether this was the best time to bring a music group to the country.

I can honestly say it was an easy decision to stick with the plan to bring them here.

Throughout human history, music has had the ability to inspire, and we believe there’s no bad time for inspiration.

And there’s no bad time to encourage creativity, or entrepreneurship, or to build common bonds through music.

The young Ethiopian musicians who’ve worked with Crow and the Canyon over the past 10 days deserve all the inspiration they can get – and they certainly inspired us in return.

Bluegrass is a particularly apt choice for Ethiopia right now, as the country strives to take strength from its long tradition of cultural and ethnic diversity.

Bluegrass is arguably the music of diversity, in that it blends a number of the United States’ own diverse cultures and musical influences.

It draws from the musical traditions of Appalachia, particularly the remote and mountainous regions of the southeastern United States.

It also draws from the traditional music of Irish, Scottish, and English immigrants to the United States, as well as from elements of African-American jazz and gospel.

Bluegrass distills these many influences into a uniquely American sound.

And tonight, we’ll hear the diversity that lies within bluegrass music itself.

Crow and the Canyon will take us on a musical journey through classic bluegrass, heartland acoustic folk, and bluesy country – all aspects of one sound that reflect so much of the story of the United States.

Please join me in thanking the members of the band for being here tonight:

And now, on to the good stuff.    Ladies and gentlemen, Crow and the Canyon!