Home Home | News & Events | Remarks by U.S. Ambassador Michael A. Raynor at the commencement of a preservation project of Bet Golgotha Micheal churches 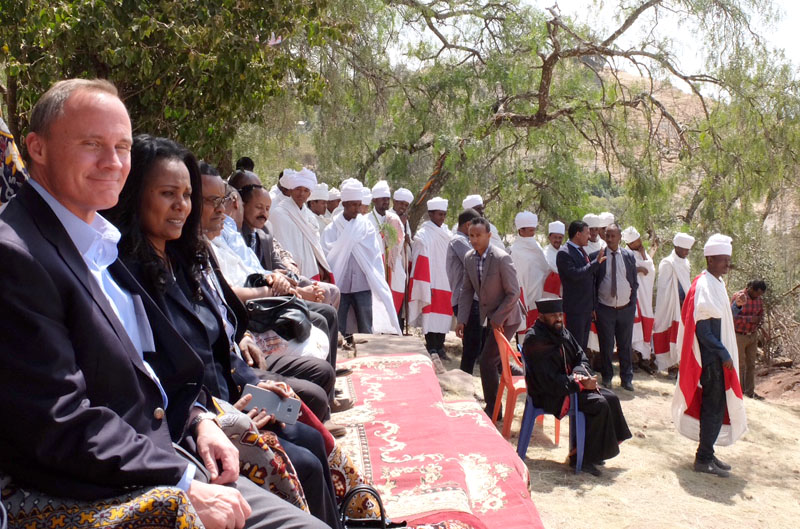 Your Excellency Minister of Culture and Tourism, Dr. Hirut Woldemariam,

Abba Yared Misganaw, Head of the Administration of the Lalibela Churches,

Thank you all for allowing me to be here this morning.

Over the course of a 30-year career spent mostly in Africa, I long hoped to come to Ethiopia.

I assumed it would be as a tourist, and never imagined that that I’d have the honor of being here as U.S. Ambassador.

While I’m constantly learning new things about this fascinating and multifaceted country, the rock-hewn churches of Lalibela are something I’ve always known about and dreamed of seeing.

Indeed, even for those who know little about Ethiopia, Lalibela has a unique place in our collective consciousness.

So I’m very honored and excited to be here today, and even more so because we’re launching this important new project, under the U.S. Ambassador’s Fund for Cultural Preservation, at Bete Golgotha Mikael.

In recent years, the U.S. Ambassador’s Fund for Cultural Preservation has supported nine projects throughout Ethiopia, including most recently the restoration of Bete Gabriel and Rafael, also here in Lalibela.

As I was preparing these remarks, I was thinking a lot about the idea of cultural preservation.

Often it means preserving some relic from the past, or protecting something that might otherwise be lost to irrelevance.

That’s most definitely not the case here, and that’s what makes this project so exciting.

We’re working to restore structures that are not only integral to Ethiopia’s past, but that represent a religion and culture that are very much alive and active today.

Ethiopian culture is remarkable for many reasons, including its diversity – and its tolerance of diversity.

What is not possible in some parts of the world is possible here.

Calls to prayer ring out in the early morning for Orthodox and Muslim worshippers alike – often just streets apart.

That generations-old appreciation for diversity and peaceful coexistence is an essential component of Ethiopia’s character.

But it has never come easy, and it does not come easy today.

Just 50 kilometers from here, lives were lost in violence during what should have been a joyous day.

Of course such events are not representative of Ethiopia’s culture and traditions.

Doing so is important for the country’s future, not just in terms of peace and stability, but in terms of building a more prosperous nation.

While there’s no question that diverse cultures carry immense value in their own right, there is also an economic argument to be made for supporting cultural diversity.

Just as we commit ourselves to sustaining Ethiopia’s unique heritage for future generations, we hope that Ethiopians can tap more fully the enormous economic opportunities offered by their country’s rich heritage.

Ethiopia has a unique history and a compelling story that has only begun to garner its rightful attention in global tourism.

Tourism can generate sustainable growth, create jobs, support opportunities for small businesses and entrepreneurs, and be a driver of development.

In that sense, our efforts to preserve Ethiopia’s heritage are also an investment in Ethiopia’s broad-based economic growth and lasting prosperity.

This is one of the reasons why the project we’re celebrating today has given great attention to preserving these magnificent structures in a way that does not imperil their long-term integrity, and that does not harm the sacred atmosphere of these extraordinary places.

Innovative and non-intrusive techniques, which were developed and piloted at our first Lalibela project, will be used again at Bete Golgotha Mikael.

And local craftsmen will continue to be trained in these methods, expanding Ethiopia’s capacity to care for and preserve its own heritage.

Equally exciting, these conservation techniques and training methods can be replicated for future projects, and shared not only throughout Ethiopia but across the globe.

In launching this project, we’re honored to work with an extraordinary team of partners:

I’m honored to represent the United States as part of this collaborative effort to preserve this incredible treasure for future generations.

There’s much to be learned and shared from this history, as we work together to build a brighter future for us all.  Thank you.