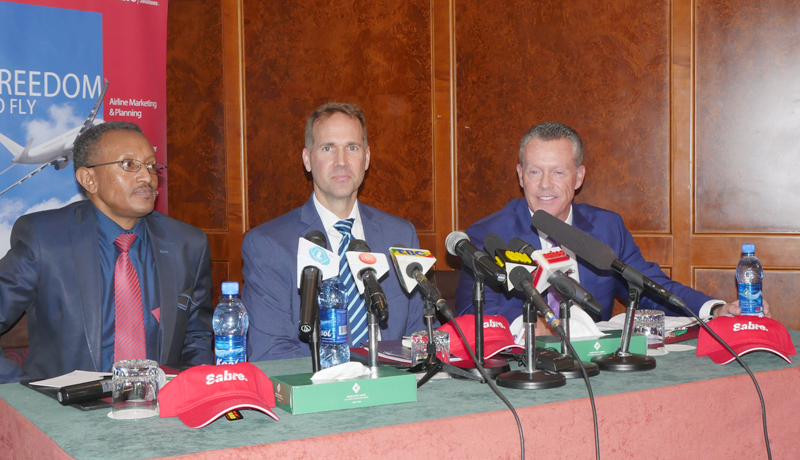 Remarks by
Troy Fitrell
Chargé d’Affaires of the U.S. Embassy
At the contract signing ceremony
Between Ethiopian Airlines and Sabre
Sheraton Addis Hotel

It is an honor and a great pleasure for me to be a part of this contract signing ceremony.

It has been about a month since I came to this beautiful country and took on the role of Chargé d’ Affaires for the U.S. Embassy in Addis Ababa.  Exploring Ethiopia has long been a goal. I am excited to be here and to learn about this fascinating country, which demonstrates so much potential.  Today is an example of how the United States and Ethiopia can work together to unlock that potential, as U.S. companies such as Sabre seek to expand their partnership with Ethiopian companies – in this case a world class airline like Ethiopian Airlines.

Having served previously in Africa, I’ve witnessed Ethiopian Airlines growth over the years, and have noted their accumulation of several awards for their outstanding service and fleet. Representing the U.S. government, I am proud to say that American companies like Sabre, Boeing, GE, Honeywell, and AAR have been key partners in Ethiopian Airlines’ success.

Thanks to you, Tewolde, Ethiopian Airlines’ growth in the past decade has been simply phenomenal and we want to thank you for your continued commitment to expanding bilateral trade and tourism between our two countries.  This is a clear example of how both our countries benefit from cooperation.

American companies have always enjoyed a great relationship with Ethiopian Airlines, and that relationship is enshrined in the naming of your first class teaching academy after the American Colonel John Robinson who helped get Ethiopian Airlines initial service off the ground.  I appreciate the continued recognition of that history in the naming of a new Boeing 787 after Colonel Robinson.  It’s worth mentioning that we also honor this historic cooperation, having named our flagship American Center here in Addis Ababa after Colonel Robinson as well.