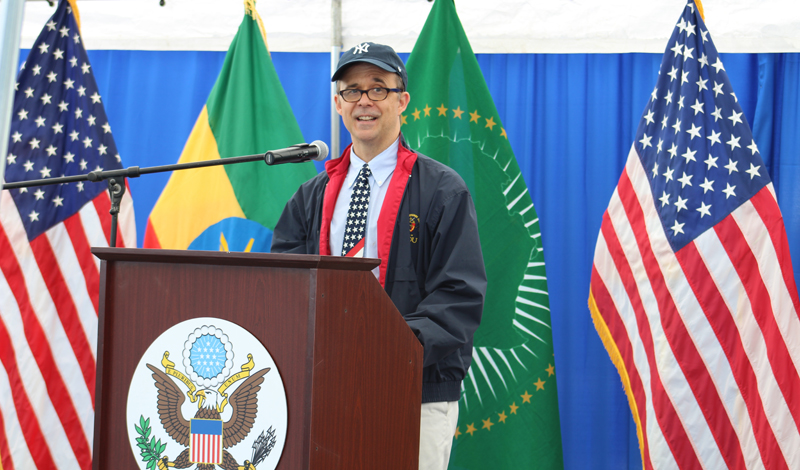 Remarks by
Peter Vrooman
Chargè d’Affaires of the U.S. Embassy
at the National Day Celebration
May 19, 2017

This is my first and last national day address during my three years in Ethiopia.  I promise to be brief.   You likely have two questions that I will try to answer in my remarks today.  I will close with one observation.

First, why are we celebrating May 19th, not July 4th?   The most honest answer would be to say that today is – normally – a sunny day, and comes weeks ahead of the departure of many diplomats and their families to future posts.  The last day of the AU Summit is scheduled for July4rth as well.

We could develop other rationales around this date:

May 19th was the day French explorer Jacques Cartier set sail for North America in 1535, but he’s more iconic in Canadian history.  And Native Americans or First Peoples predated Cartier by millennia.  You will have the opportunity today to see Native Americans, the Little Shell Tribe of the Chippewa Indians, perform today.

Ambassador Mary Beth, with her Boston Red Sox hat, may recall that delegates from four New England colonies met in Boston to form a confederation on this day in 1643.  By the way, the Samuel Adams beer you are drinking today pays tribute to an organizer of Boston’s Sons of Liberty who failed as a brewer but succeeded as a patriot!

In 1856 on this day, another man from Massachusetts, Republican Senator Charles Sumner, delivered a scathing critique of slavery.  On May 19, 1864, the Union and Confederate armies launched their last attacks against each other at Spotsylvania in Virginia in 1864.  One year later, Union General Granger arrived in Texas and read General Order Number 3 declaring, “… all slaves are free.” The implementation of the Emancipation Proclamation spawned “Juneteenth” celebrations in America.  But that celebration of “the 19th” also lies a month away.

In short, while July 4th (and Thanksgiving) are favorite holidays in the United States, my friend, Justin Hughes, reminded me that what unites all Americans is that all Americans look forward to “tomorrow.”  In the words of JFK, whose 100th birthday anniversary is ten days away, “The American, by nature, is optimistic.”  Tomorrow will always be better, and brighter, and it is this spirit of optimism that we celebrate today.  This idea is enshrined in our Declaration of Independence that “We hold these truths to be self-evident, that all men are created equal, that they are endowed by their Creator with certain unalienable Rights, that among these are Life, Liberty and the pursuit of Happiness.”

Your second question: why are so many people wearing sports caps and jerseys today at this bbq?

“Sports in America” is our theme today.  I am a New York Yankees fan while Ambassador Mary Beth is a Boston Red Sox fan.  These two teams win regularly, but in America you will find equal passion for the underdogs, such as the Chicago Cubs, which won the World Series in 2016 after more than a century of defeats.

Sports unite us of all around the world.  There is no better example than the World Cup in football/soccer.  We rejoice in the achievements and victories of our favorite teams and sports heroes, and we support them even when they don’t finish first.  We celebrate the sportsmanship.  An Ethiopian exemplar of this spirit is here with us today:  Lelisa Desisa won the Boston Marathon in 2013, and donated his winner’s medal to the people of Boston in honor and in memory for those who died on April 15, 2013.  I thank him for joining us today.

From basketball to volleyball, baseball to American football, and even lacrosse and ultimate Frisbee®, some sports are uniquely American while others have spread around the world.  Baseball was born in New York and basketball in Massachusetts – but both sports probably had their origins in Native American sports.  But beyond the entertainment value, sports in America tell us something very fundamental about American society, the importance of equality of opportunity and the promise of a better tomorrow.

Sports have been a harbinger of societal change in America.  During World War II, with many athletes sent to the front lines, the All-American Girls Professional Baseball League was founded to keep the sport alive.  The idea of women playing professional baseball challenged attitudes about gender roles and presaged the trend of women entering the work place in the decades that followed.  And let’s not forget the impact of the Special Olympics or the Paralympic Games, which have promoted inclusivity of persons with disabilities around the world.

Equality of Opportunity is an essential American value that has a broad appeal across the globe.  I have had the great privilege during my time in Ethiopia to meet Ethiopian champions of this value, and want to particularly salute those among you who have advocated for the rights of women, the disabled and the marginalized into the mainstream in Ethiopia.