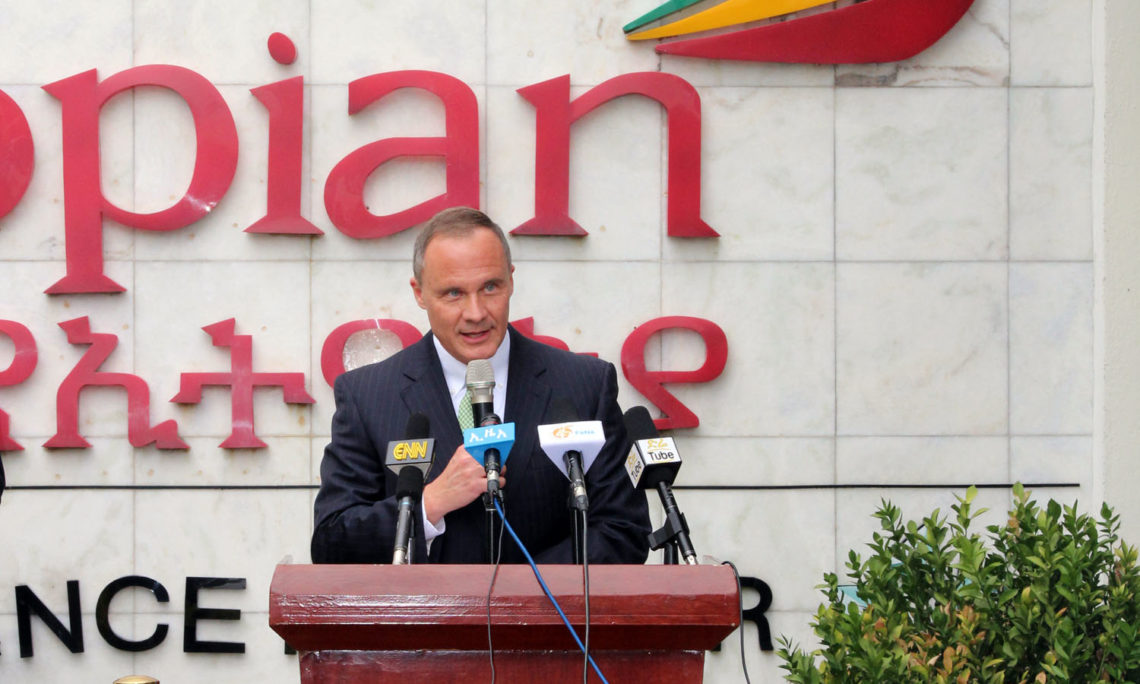 It’s a great pleasure for me to be here today, as we celebrate the latest in a long line of important milestones in the relationship between the United States and Ethiopia’s aviation industry.

Having spent many years in Africa, I’ve had lots of opportunities to admire Ethiopian Airlines’ remarkable growth and success in strengthening the connections between Ethiopia and the United States, in connecting Ethiopians with each other, and in connecting Africa to the world.

I’m humbled by the rich aviation history that Ethiopia and the United States share, dating back to Colonel John Robinson’s pioneering commitment to Ethiopian aviation and the role TWA played decades ago in supporting the establishment of a national airline in Ethiopia.

But while TWA is no longer flying, Ethiopian Airlines is thriving, and it’s clear that the world can learn a lot from Ethiopia – and particularly from Ato Tewolde and the entire Ethiopian Airlines team – about how to run an airline right.

The United States’ role as a partner in Ethiopia’s aviation success is something we’re very proud of, and committed to building upon.

Today we’re celebrating the installation of state-of-the-art equipment that will enhance the safety of millions of travelers who either visit Ethiopia or transit this important hub every year.

Ethiopian Airlines’ rapid growth comes with enormous benefits in terms of trade, commerce, tourism, and investment opportunities – not just in Ethiopia, but in the United States and beyond.

This growing connectivity opens the doors for prosperity, but we all know that we can’t have sustainable prosperity without security.

Security in the aviation industry isn’t a cost, it’s an asset, and is something that both the United States and Ethiopia take very seriously.

We’ve cooperated in the past to support passenger screening in line with global security standards, and today we’re welcoming new equipment that will do the same for Ethiopia’s baggage operations.

These new screening devices, provided by the U.S. Government, employ a new technology called computer tomography that represents the latest in imaging for baggage scanning.

This technology will enhance Ethiopia’s ability to detect not only potentially hazardous items, but contraband items such as drugs and illicit wildlife products as well.

In keeping with Ethiopian Airline’s long tradition of “firsts” as Africa’s aviation pioneer, this is the first deployment of this technology to Africa.

We see it as a significant step forward in keeping passengers safe, protecting the world’s wildlife resources, and fighting transnational crime.

I’m very happy that we’re able to celebrate this milestone with a delegation from the U.S. Transportation Security Administration, the agency responsible for the safety of the United States’ transportation systems.

Their presence here reflects our recognition that none of us can ensure our own security without strengthening the security of our partners, and demonstrates our commitment to working with Ethiopia as a key partner to ensure our mutual protection and success.

Because when you get right down to it, the United States is in Ethiopia because we’re committed to Ethiopia’s success.

Our partnerships with Ethiopia are built around the idea that when Ethiopia succeeds, when it’s prosperous and stable, and when it taps the fullest potential of all its people, not only Ethiopia but the region, the United States, and the world at large also benefit.

The role Ethiopian Airlines plays in connecting people and promoting Ethiopia’s prosperity is invaluable, and these are goals the U.S. Embassy will continue to support as well through our own development, economic growth, governance, humanitarian, public outreach, and commercial programs.

In the end, I see Ethiopian Airlines as more than an incredibly successful airline:  I see it as a shining symbol of our shared goals for Ethiopia’s growth, stability, and prosperity.

That’s why I’m so happy to be here today, to celebrate a partnership that the United States values deeply, and that we will work to strengthen even further in the days ahead.