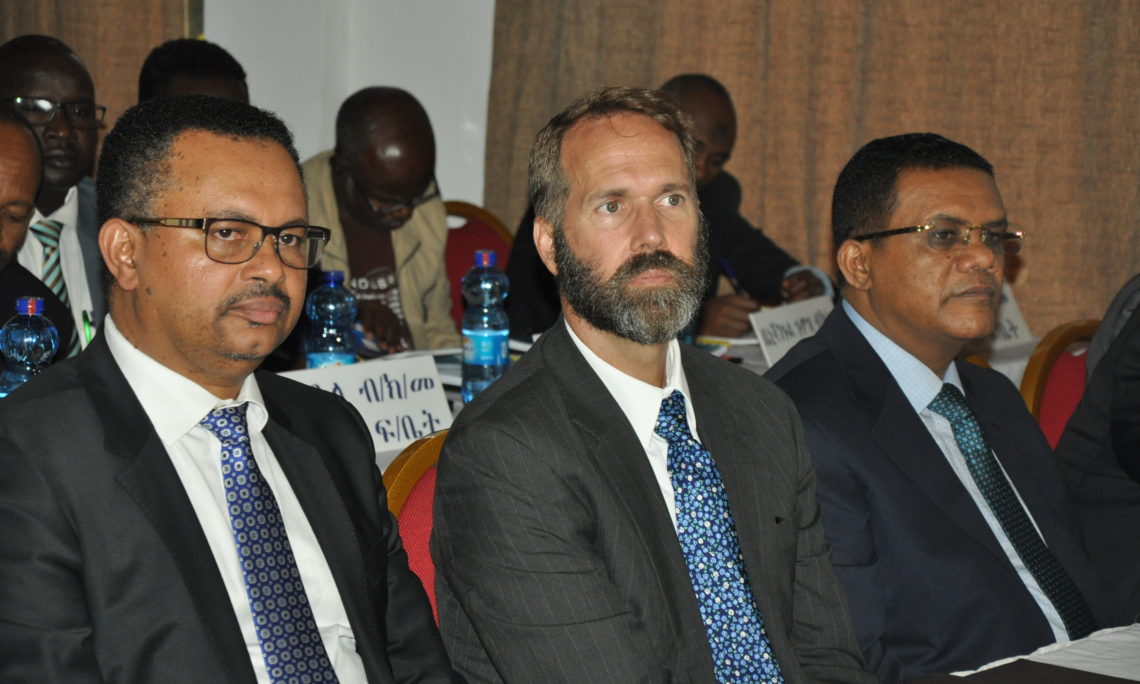 Your Excellency President of the Federal Supreme Court, Dagne Melaku,

Distinguished officials and members of the Joined Up Justice Forum,

The United States has been a proud supporter of the bi-annual Joined Up Justice Forum for 11 years.  And I have to say that there has never been a more exciting time to gather for this dialogue on the function of Ethiopia’s justice system and how we can work together to create lasting improvements.

Today we have an incredible opportunity to talk about the role of the justice system in helping the unprecedented reforms proposed by Prime Minister Abiy’s administration to succeed.  On behalf of the government and people of the United States, I want you to know how eager we are to understand how we can invest our resources and expertise into supporting your capacity to achieve those goals.

I also want you to know that the United States recognizes your commitment to strengthening Ethiopia’s justice sector.  In just the first half of this year, Ethiopia has released thousands of political prisoners.  You created the Law and Justice Affairs Advisory Council under the Office of the Attorney General to lead the process of reviewing various laws like the Civil Society Proclamation, and the Media and Anti-Terrorism Laws to ensure that legislation will no longer be used to punish people for exercising their rights.  And we know this is only the beginning.

This forum is an important mechanism to help solidify the new changes that are occurring, and to help us identify the ways we can help. Last month the United States held its 8th Bilateral Dialogue on Human Rights, Democracy, and Governance with the Ministry of Foreign Affairs. Our two countries agreed to pursue strengthened bilateral cooperation in several areas, including to develop and strengthen its Ethiopia’s judiciary and legal system, improve Ethiopia’s capacity to fight corruption, and enhance a system of accountability for human rights abuses.

Just as Ethiopia has already taken important initial steps, the United States is already working in a number of ways to support those goals.  The United States Agency for International Development, partners with Haramaya University to help disadvantaged communities in the Hararghe and Harar to gain access to legal assistance and settle disputes peacefully.  To date, the project has helped over 580,000, more than half of them women.  We are now sharing the best practices from that program as USAID works with the Office of the Attorney general to

to review the National Legal Aid Strategy, with an eye toward replicating the successes of that program around the country.

USAID is currently supporting an update of Ethiopia’s 60-year-old Commercial Code, which regulates business and trade.  And yes, the justice system also has a role to play in encouraging economic development.  The origin of that effort began right here, during one of the previous Joined Up Justice Forums. We are also working to strengthen the capacity of the Federal Supreme Court to interpret the law, create guidelines for alternatives to imprisonment, criminal procedures and prosecution and promote security sector reform to lay out clear guidelines for to ensure that when law enforcement engages with citizens it will be done so in keeping with international standards.

We are also investing directly in the capacity of Ethiopia’s justice system. United States sponsors an ongoing flow of exchange visits for numerous judicial system professionals—judges, prosecutors, police, prison administrators, and justice bureau heads. These visits offer the chance to see how other systems work and rethink the approach in Ethiopia.  I know that many of you here today have participated in these programs and have brought back valuable new ideas and proposals for how they can do their jobs better than before.  Each one of you makes a difference, and together you can overcome any challenge.

U.S. financial support to the Justice for All – Prison Fellowship Ethiopia, which convenes this Forum, has facilitated in-depth training for over 3,000 judges, police, and prosecutors to support their capacity to protect human rights and democratic systems in accordance with international statues and the Ethiopian constitution. The impact on human lives is tangible.  For example, over 2,400 pre-arranged child marriages have been cancelled, and we are making significant progress toward ending female genital mutilation through education, improved investigative capacity, and enforcement of existing laws.  We can easily get lost in the statistics, but remember that every child who avoids forced marriage and every girl who escapes the suffering of FGM, is a citizen who will go on to be healthier, stronger, more productive citizens who can help lift Ethiopia toward a better future.

And that’s the reason we are here today.  The United States wants Ethiopia to succeed, and that means investing in the success of the Ethiopian people. This can’t be accomplished without a healthy justice system.  You already know that rule of law is a key driver of inclusive, equitable, and sustainable development.  That is why it’s imperative that our justice systems and the men and women who serve earn the trust and confidence from the people they are there to protect.  Put simply, democracy cannot exist when people are unable to trust the systems charged with upholding rule of law.

You are not alone in facing those challenges.  In sharing our experiences, we think it’s important to share the instances where we have fallen short as well as those where we have succeeded.   The United States too, continue to wrestle with making necessary improvements to our own justice system and maintain our citizens’ faith in it.  Justice as a concept is universal, but in practice it must be adapted and evolve to meet new and specific challenges. I hope that the Ethiopian people will see, as I do, that your presence and active participation at this Forum demonstrates that Ethiopia’s justice officials are committed to doing their part.

I want to thank all of you who have taken the time to take part in this important dialogue and to reassure you again that the United States remains committed to supporting your endeavors in any way we can. You’ve already taken the first steps by being here and we will be by your side as you move forward.

Betam  Amesegenalehu. (Thank you very much).