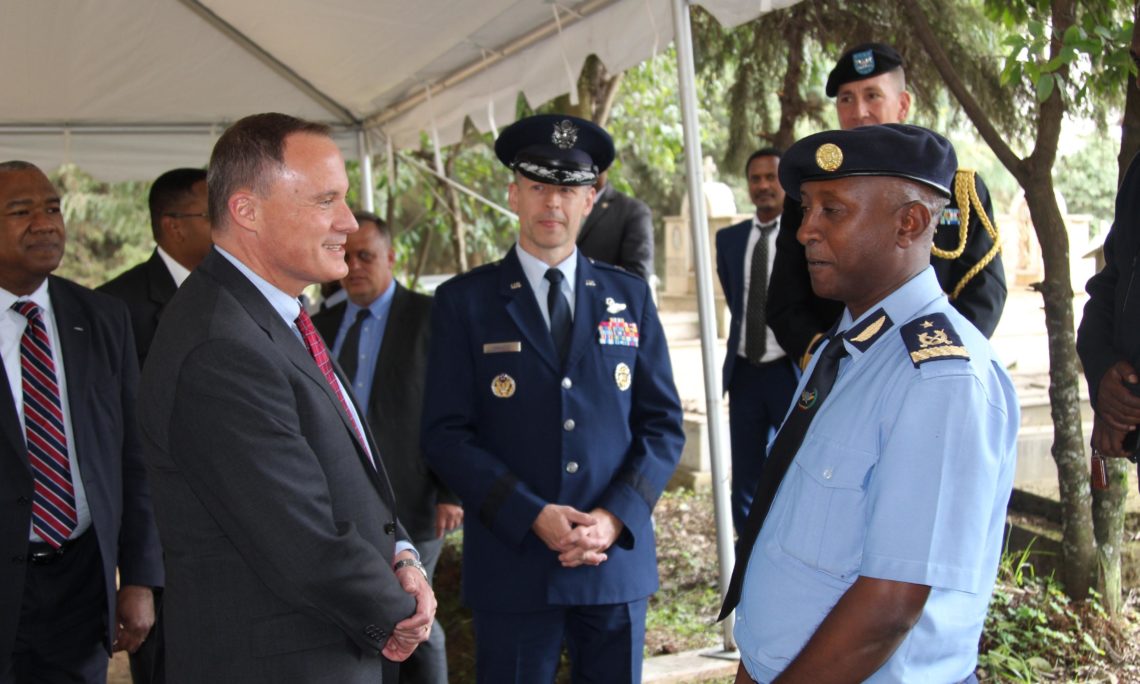 Thank you to his Eminence Cardinal Berhaneyesus Souraphael), Metropolitan Archbishop of Addis Ababa, President of the Catholic Bishops’ Conference of Ethiopia, and  Chairman of the Association of Member Episcopal Conferences in East Africa for leading today’s memorial service.

I’d also like to welcome representatives of the United States military who have come to honor the memory of Col. Robinson:

We’re here to honor the legacy of a man who became a role model and hero for two countries, and whose contributions and achievements continue to resonate in both our countries nearly 65 years after his passing.

The story of Col. John C. Robinson illustrates something that is sometimes overlooked when we talk about the relationship between the United States and Ethiopia, when we tend to focus on the important work that takes place between our two governments.

But Col. Robinson’s story reminds us that the impact of our people-to-people relationships can be even greater.

Col. Robinson is perhaps best known in Ethiopia for his efforts to support the development of the Ethiopian Air Force and later the foundation of Ethiopian Airlines.

But Col. Robinson didn’t come to Ethiopia because he wanted to start an airline.

He came because he felt the pull of this extraordinary country and the values we share; because he wanted to support Ethiopia’s unyielding fight to preserve its independence; and because, at the end of the day, we’re all human beings who are strengthened by the support we give one another.

And that, more than anything, is what has forged the bonds between our countries.

Long before he set foot in Ethiopia, Col. Robinson was challenging racial prejudice in the United States.

Blocked from pursuing his passion for aviation due to segregation and discrimination, he got a job as a janitor to gain access to the school that had denied him entry as a student.

He used that entry point to prove himself, persuading the school to look past its prejudices and enroll him.

Determined to pursue and share his love of flying, he went on to start his own aviation school, and this initiative caught the attention of Emperor Haileselassie, who invited Col. Robinson to Ethiopia.

In Col. Robinson’s determination to achieve his goals despite the barriers he faced, I see a parallel with so many people in Ethiopia, who also work every day to overcome challenges, knowing that tomorrow can be better.

This spirit of self-reliance and hope is something our two nations share, along with a belief that our efforts will move us forward.

Col. Robinson’s efforts in Ethiopia gained attention back in the United States, and helped change attitudes toward African Americans serving in our military.

This paved the way for the Tuskegee Airmen, the first unit of all Black pilots, who went on to contribute significantly to the Allied victories in North Africa and Italy.

That’s very fitting when you consider that Col. Robinson originally came to Ethiopia to support the resistance to the Italian invasion.

We know how the story continues.

Col. Robinson returned to Ethiopia and helped found what is now Ethiopian Airlines, Africa’s largest airline and one of the most successful in the world.

Today the aviation partnership between the United States and Ethiopia continues, with new purchases of American aircraft by Ethiopian Airlines and our joint cooperation on airline safety and airport security.

Another of Col. Robinson’s legacies, or course, is our strong and ongoing cooperation with the Ethiopian Air Force.

I’m proud to say that we just delivered a C-130 transport aircraft to the Ethiopian Air Force to support Ethiopia’s critical role in regional peacekeeping and humanitarian operations.

I wonder if Col. Robinson would be surprised by how far our partnership has taken us, but I think not.

He saw the same potential in Ethiopia that we see today.

But I have no doubt that he would be proud.

As we reflect on the vitality of the U.S.-Ethiopian partnership, it’s fitting that we celebrate the life of a man who contributed so much to building that partnership.

Let’s never lose sight of the legacy he left for us, and let’s re-commit to strengthening the essential partnership between our two countries and contributing to our mutual success.

Thank you, Col. Robinson, for your exceptional service to both our nations.

You are not forgotten, and you will not be forgotten. And thank you all for joining this celebration today.