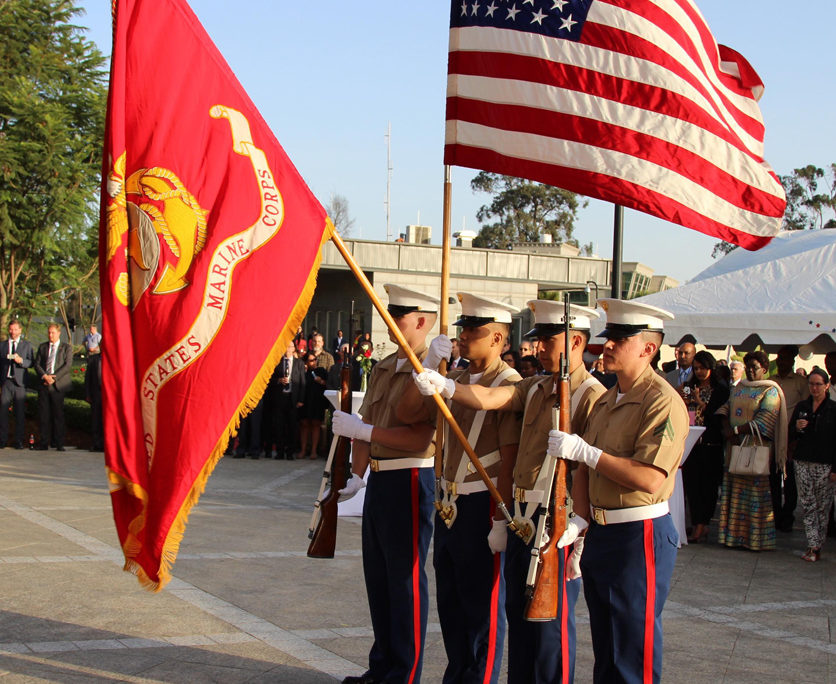 Ambassador Birtukan, ladies and gentlemen, good evening and thank you very much for joining us

And while I admit that 242 isn’t a very big number by Ethiopian standards, the U.S. has a history, and a story, to celebrate as well.

Americans have a strong tradition of storytelling, one that is as dynamic and diverse as the cultures that make up our country, and it’s a tradition that influences our diplomacy as well.

We like to tell our story because we think it’s a pretty great story, but also because we believe it can be a source of encouragement and inspiration to people around the world.

And in the end, inspiration is probably one of the things the United States does best.

America’s story inspires because it’s a collective story, and a human one.  It’s a tale of a country built on ideas, rather than identity.

An American can look like anyone, believe in anything, and come from anywhere.

Our story is about how we have succeeded when we’ve upheld our founding ideals, and how we’ve faltered when we’ve fallen short of those ideals.

When we share our challenges and even our failings, we also try to share our efforts to do better, because this can give, we believe, a message of hope and progress to people well beyond our borders.

In this spirit, over the past few months the United States expressed our strong hope, as a deeply committed partner to Ethiopia, that the country would take the fullest possible advantage of the extraordinary opportunity created by Former Prime Minister Hailemariam Desalegn when he stepped down in the name of furthering political reform.

At times, we expressed our views in ways that some felt were unprecedented in their bluntness.

But we wanted to be clear about how we saw things:  that by committing itself to political reform and safeguarding its citizens’ rights, Ethiopia would not only build a more democratic and inclusive nation, but a more prosperous and peaceful one as well.

It was a view very much informed by our own American experience.

And it’s why we’re so gratified by recent events in this country, and why we’re so inspired by the tone and direction that both the new administration and the Ethiopian people are setting for their future.

My country and my colleagues are deeply impressed by the focus of Prime Minister Abiy and his government on political inclusivity, national unity, and shared responsibility.

And we’re moved and inspired by the eagerness we see among the Ethiopian people for constructive change, and by their optimism for a brighter future.

The American experience underscores that such change will require effort.

It will take collective persistence and commitment to ideals. It will take patience. And it will take the courage to hope, and to trust.

We’re proud of America’s story, even the chapters that aren’t always easy to tell.

And we recognize that our story is still being written, always with the aim, not always achieved, of making the next chapter a little better than the one before.

The same is true for Ethiopia, and the United States stands firmly with all Ethiopians as they work together to build their narrative of peace, progress, and prosperity.

And I stand firmly with you all, in wishing you a very pleasant evening.