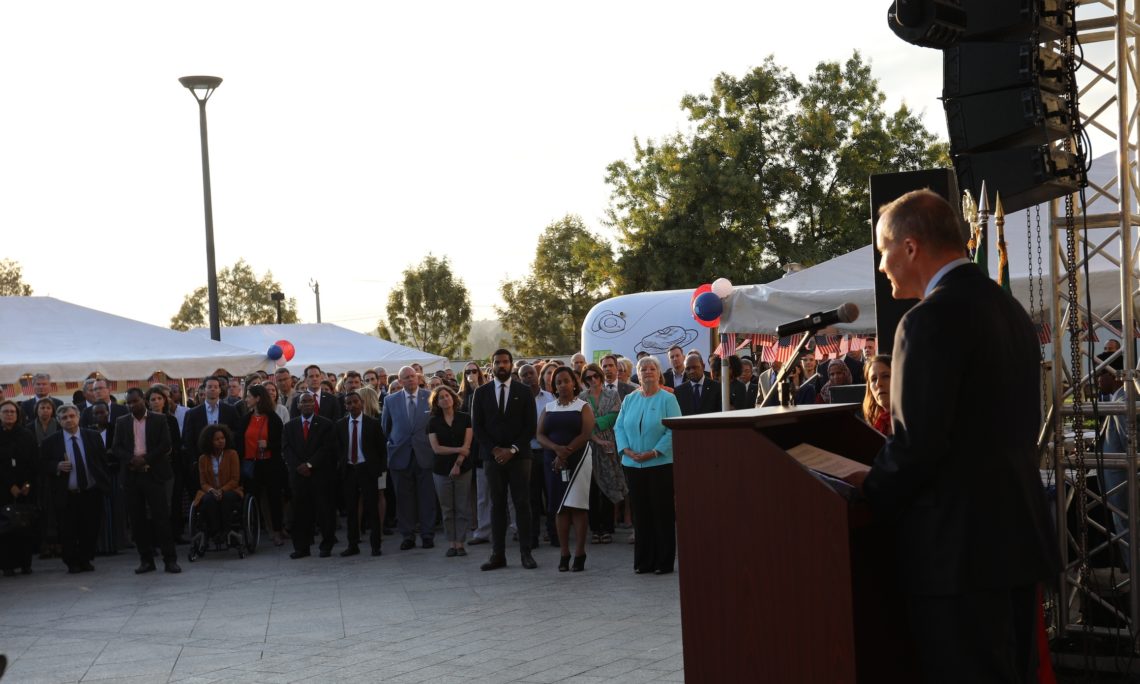 Thank you all very much for joining us on this beautiful February evening. We took a number of you by surprise this year by moving our national day celebration from May to February, which must have been doubly confusing for those of you who know our national day is actually in July. In any case, we’re grateful for your flexibility in turning up tonight. The shift to February was originally intended to move us farther from the rainy season, but it has another benefit as well:  it allows us to celebrate two U.S. holidays for the price of one.

We’re celebrating our national day, of course, which we call Independence Day, and as Ambassador Jessye noted, this year marks the 244th year of our independence. The other holiday we’re celebrating today is Presidents’ Day, which commemorates two of our most consequential presidents:  George Washington and Abraham Lincoln, both of whom were born in February. At last year’s national day, I spoke a bit about the first of these presidents:  George Washington. And the unshakable faith he and all our founding mothers and fathers shared, during our nation’s uncertain early days, in our people’s ability

And last year I expressed my country’s confidence that the founding mothers and fathers of a new Ethiopia would similarly believe in their ability to build a peaceful, prosperous, and democratic nation. In the months since then, Ethiopians have accomplished much, guided by an agenda of economic and political reforms that remains inspiring in its scope and limitless in its potential to improve Ethiopian lives. Indeed, Ethiopia today is already a very different country than the one I arrived in less than two and a half years ago, and it remains on an exciting path toward political inclusiveness and economic opportunity, which represent the only true path to durable stability as well.

I’m proud that the government and people of the United States are side by side with Ethiopia on this path, and we remain enduringly committed to supporting Ethiopia’s positive transformation. Over the past several months, we’ve mobilized over 130 million dollars in new U.S. resources, with more on the way, to support Ethiopia’s reform agenda across seven key areas: elections;

We’re deeply honored to be playing a supportive role in the strides Ethiopia has already made in these areas, and we’re committed to assisting its continued progress going forward.  Along with Ethiopia’s many accomplishments, numerous challenges remain. A political and economic re-set of Ethiopia’s scale and ambition will continue to take time, and won’t always be easy. The concern I hear most from Ethiopians in this regard centers on security and stability, and on the extent to which their country can, or even should, hold itself together when so many of its people are emphasizing regional or ethnic interests.

Which brings me to the second U.S. president we honor on President’s Day:  Abraham Lincoln. Why does the United States place so much stock in a president who assumed office 169 years ago, and held office for only four years? In short, it’s because during those years, Lincoln brought our country through the greatest political, constitutional, and moral crisis we’ve ever faced, and the deadliest war in our history.

In the 64 years that passed between George Washington and Abraham Lincoln, our country’s population grew ten-fold and our economy even faster, and many Americans came to see growth and prosperity as their birthright. But our sense of unity and prosperity had a deep and fundamental flaw, in the pernicious and deeply evil practice of slavery. When Abraham Lincoln assumed office, almost 4 million men, women, and children were enslaved, and stark differences were emerging among Americans regarding what, if anything, to do about it.

As tensions mounted, many Americans placed narrow regional, economic, and historical equities above the aspirations they shared as Americans. They chose to ignore that building our nation, what our Constitution calls our effort “to form a more perfect Union,” depended upon a shared commitment to offering the promise of democracy, prosperity, and equality to all.

And worst of all, they forgot our nation’s shared humanity. And so came a terrible war: four years of carnage and destruction, of Americans fighting Americans, that killed over 2 percent of our entire population, decimated our economy, and left scars that persist to this day. We honor President Lincoln because he took our country through war and back to peace. He led us to abolish the darkest moral stain on our national character. And he put us back on the path toward creating our “more perfect union.”

Even today, his example reminds us that focusing on what divides us, rather than what unites us, can come at a dreadful cost, and that the work of protecting democracy and building solidarity is never easy and never-ending. Lincoln knew the importance of valuing our common history and heritage, and the power of believing in a shared vision for our country’s destiny. And he knew that when our nation comes together around a common purpose, there’s very little it can’t accomplish.

What Lincoln knew to be true of the United States, the United States knows to be true of Ethiopia. We treasure the friendship we’ve enjoyed with Ethiopia for more than a century, and we’re fully invested in its efforts to build the peaceful, prosperous, and politically inclusive future Ethiopians want and deserve. Ours is a partnership based on a simple and shared premise: that what serves the best interests of the Ethiopian people – health, education, economic opportunity, government accountability, and peace – are also what serves the best interests of Ethiopia as a nation.

And what serves the best interests of Ethiopia also serves the best interests of the United States, because Ethiopia is an essential partner to the United States, and we want our partner to be as strong as possible. But while we’ll always be steadfastly by Ethiopia’s side, it’s only the Ethiopian people themselves who can come together to build their democratic, prosperous, and peaceful future.  The United States firmly believes the Ethiopian people will do exactly that, and we’ll continue to invest in all Ethiopians who share the belief that Ethiopia is destined for greatness, and well along the path to achieving it.

One final thought before closing. To my left – that big circle over there – is the Great Seal of the United States of America.  The eagle on our seal is holding a ribbon in its beak, and on that ribbon are three words. Words that are very simple and short, even in their original Latin. These words are E Pluribus Unum, or in English, “Out of Many, One.” In those simple words is conveyed the central premise of our nation, and its enduring challenge. That to succeed as a nation and a people, we must recognize, respect, and value our diversity. And that, at the same time, our diversity must reside within a broader framework of unity, and of solidarity, respect, and peace.

This is a challenge that never ends, but prioritizing efforts to meet that challenge can take any country a long way toward success. On this important day for Americans, we celebrate this simple idea – “Out of Many, One.” A foundational principle that guided George Washington during the uncertain early days of our nation, and that inspired Abraham Lincoln to lead us through our darkest hour. I’m grateful to my fellow American citizens here tonight for joining in this celebration of our diversity and our unity. And I’m honored by the presence of so many friends from Ethiopia and elsewhere, who’ve come to share this special occasion with us.

If anyone leaves here tonight with anything more than a full belly and a light heart, I hope it will be those three simple words:  E Pluribus Unum. And I hope that, out of the Many who are here tonight, we will all join as One, in having a wonderful evening.