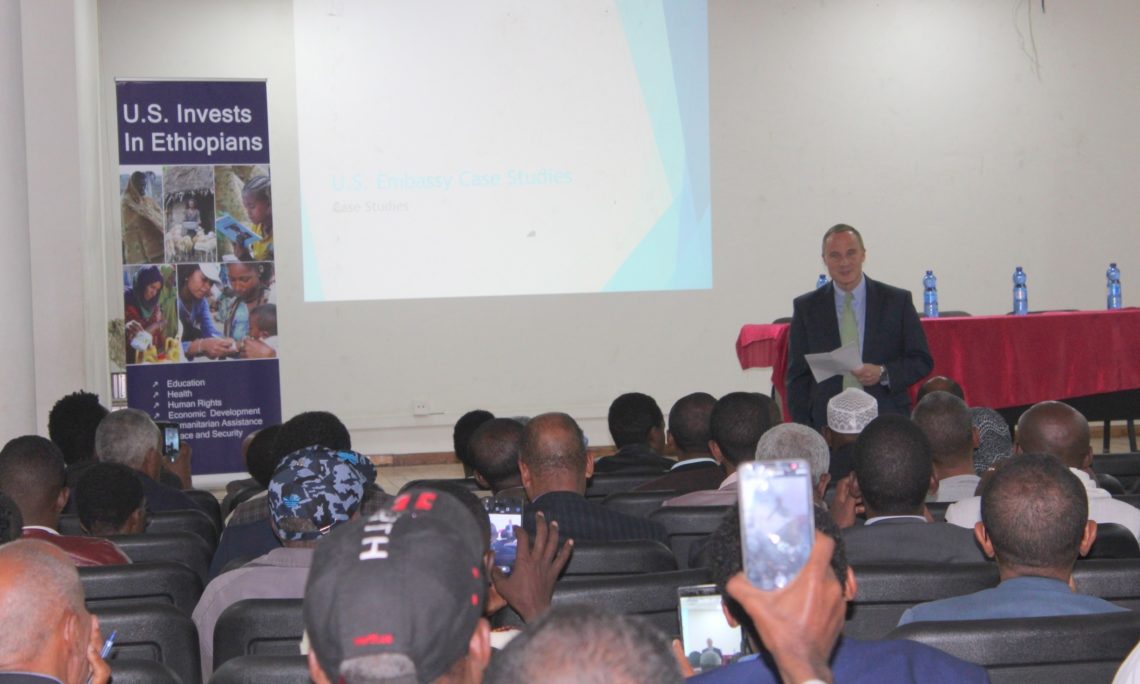 In my fairly long career, I’ve seen few things as consequential, and as positive, as the opening of political space in Ethiopia over the past year.

While this development might seem, to some people and in some ways, to have been a sudden one, it wouldn’t have happened without the enormous amount of courage and engagement shown by you, and others like you, in the months and years preceding it.

You have my sincerest respect and admiration for your role in bringing this change about.

Here, today, in this room:  this is what the opening of Ethiopia’s political space looks like.

To have so many different political parties gathered in one place, and in a government building no less, is a testament to how far Ethiopia has come over the last year.

But creating this new political space, as difficult and momentous as this has been, is just the first step.

Now the question is what Ethiopians will do with it.

One of the first things Prime Minister Abiy said when he took office, was that his government would view other political parties as competition rather than opposition.

To me, this is a truly important concept, because it proposes a sense of unity and cohesion that transcends any differences Ethiopians might have with the government, or each other, over matters of policy.

It suggests that, despite such differences, there can and must be a deep and enduring consensus around the right of all Ethiopians to participate in democratic processes that allow for, and even encourage, the diversity of viewpoints reflected in this room and in Ethiopia writ large.

Though you’re here today to explore how you can strengthen your political parties, you’re part of something bigger as well.

Whether your party wins or loses any given election, your leadership role within Ethiopia’s new political space is doing nothing less than ensuring Ethiopia’s peaceful, multi-party future.

By proving that this democratic future is not only viable, but essential, you are the founding mothers and fathers of a new Ethiopia.

And in that role, you must succeed.

As difficult and uncertain as the road has been up to this point, the path ahead is, in many ways, even more challenging.

It can be much harder to work for something, than to work against.

Deciding what to work for is no small or easy thing.

Elections are where people make their choices about the future they want to see.

And persuading your fellow citizens to support your policies through participatory elections is hard work.

But that’s your job.

And if you don’t succeed in playing your role fully and impactfully, Ethiopian democracy itself won’t succeed.

That’s where the idea of offering this workshop comes from.

This workshop isn’t focused on what your policies are, and we won’t presume to suggest what they should be.

Instead, it focuses on how you can be effective in developing your policies and presenting them to the Ethiopian people.

The United States shares the goal of seeing Ethiopia hold elections that are fair, peaceful, competitive, and credible.

And while we’re investing in the capacity of Ethiopia’s government and institutions to hold those elections, Ethiopia also needs each of you to ensure that the citizens of this country have real choices at the ballot box, and understand what those choices are.

Through everything you’re doing, including taking part in this workshop, you’re demonstrating your commitment to Ethiopia’s democratic future, and I want to thank you for it.

In return, you have our commitment to work in partnership with all Ethiopians who share the vision of a democratic, prosperous, and stable future.

Thank you very much for being here today, and for being such an important part of Ethiopia’s democratic future.

With that, I’ll turn it back over to Nick, and wish you all the best.