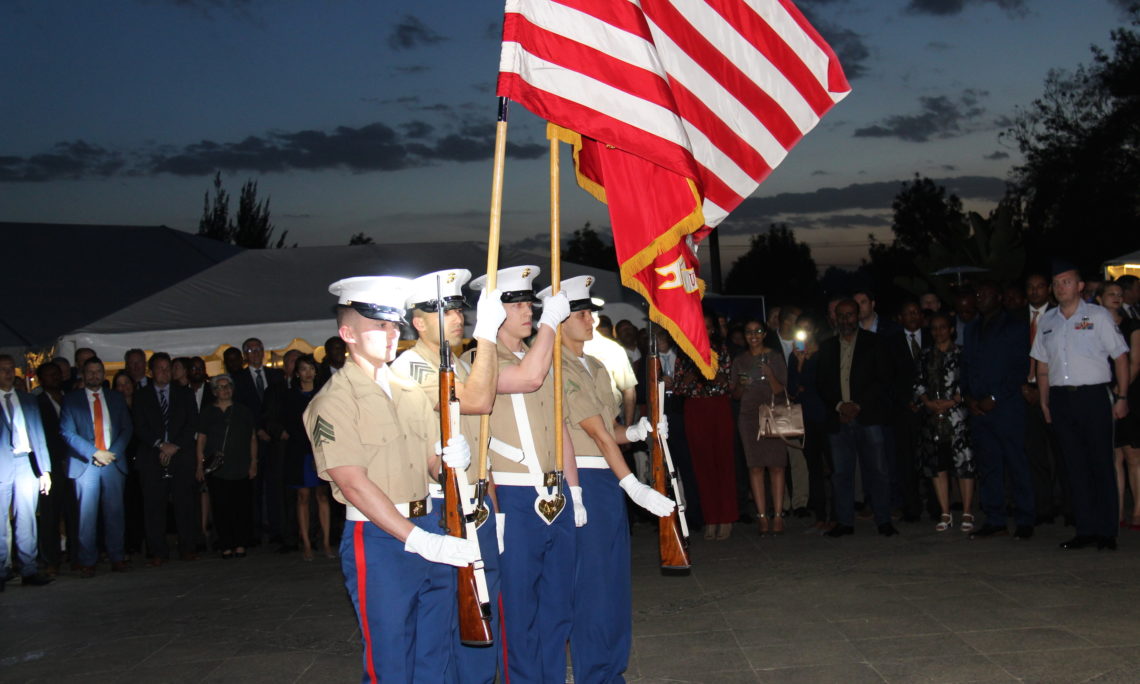 At this time last year, I spoke about the incredible promise of the reform efforts under His Excellency Prime Minister Dr. Abiy Ahmed, and the unprecedented opportunity for Ethiopia to build a prosperous, peaceful, and democratic future. I’m excited by the many gains since then, and remain firm in my optimism today.

When U.S. embassies commemorate our country’s anniversary, there’s a certain tendency to focus on America’s role as a global leader during an unprecedented period of international prosperity and security. And we often talk about the role our values have played in getting us to this point.

Those values, such as equality, inclusive democracy, economic opportunity, and the guarantee of fundamental rights, are sometimes presented as the ingredients in a recipe for success, as though mixing them in the right amounts will automatically result in the kind of peace, prosperity, and opportunity we celebrate today. But the reality is far less straightforward.

After all, it took nearly a century for all American people to be free. It took almost another full century before all Americans were promised equality under the law, and we’re still having debates about how best to uphold that promise. Our success as a nation and as a people was never a foregone conclusion, and no country can take for granted its future success.

When the United States’ founders outlined the framework for our democracy, they made what many people saw as a fairly risky bet. They bet that the people themselves would be entrusted with the power to choose their own way forward; that they would resolve their differences through compromise; that they would commit to being a part of something bigger than their narrow self-interest; and that they would take responsibility for the consequences of their actions, and in so doing, play a constructive role in building not only their own futures, but their country’s future as well.  It sounded risky indeed, and perhaps, to some, it still does.

In the early days of our country’s existence, the United States was more a loose confederation of states than a nation. We didn’t even have the capacity to collect taxes to pay for the war being fought for our independence.  Friction between states, and local uprisings, raised fears that our young country would fall apart just as it was beginning.

Even the process of forming our system of government was contentious, as individual states strove to maintain their independence, even as they recognized the need for a central authority to coordinate policies, facilitate trade, provide security, and help resolve disputes. It took six years after our Revolutionary War ended to draft and ratify our constitution, elect our first president, and establish the federal government.

As our founding mothers and fathers struggled in those early years of hardship and uncertainty, some inevitably questioned whether our nation’s insistence on being a democratic republic was really such a good idea.

During our fight for independence, one of General George Washington’s colonels expressed this sentiment in a letter, suggesting that perhaps a benevolent king would be a more expedient and effective form of leadership for our fledgling nation. General Washington, who went on to become our first President, responded the same day, writing to his colonel that no experience during the war caused him as much pain as the suggestion of abandoning the democracy he had fought for. General Washington understood that no matter how risky the idea of giving power to the people, every other form of governance was riskier still.

Ethiopia’s own foray into representative democracy is just beginning. Like our journey in the United States, it began with a number of visionaries who — together — dared to dream of a different future for Ethiopia.

That dream gained an extraordinary boost with the courageous and statesmanlike decision by former Prime Minister Hailemariam Desalegn to resign with a public call for this country to accelerate political reforms. And that in turn led to a breathtaking sense of hope and possibility, as Dr. Abiy’s reform agenda galvanized this country and Ethiopians worldwide.

Much has been accomplished in the past year. Last week, Ethiopia hosted the global celebration of World Press Freedom Day, a reflection of the great strides it has made in press freedoms over the past year. Foreign direct investment has increased by more than 10%, as the global business community recognizes the potential being unlocked by political as well as economic reforms. Ethiopia has improved the rule of law by, among other things, revisiting the laws themselves, including the Anti-terrorism Proclamation and the Civil Society Organizations law.

At the same time, many of the challenges my young country faced are also being faced by Ethiopia today. There’s uncertainty among some Ethiopians about the right way forward; varying views over fundamental questions of government function and structure; and a bit of reluctance among some Ethiopians to engage on such difficult issues.

Recently, I’ve heard some very thoughtful and patriotic Ethiopians make the same kinds of arguments that were made when the United States’ own democracy was taking shape.  Ethiopians are too accustomed to being led, I’ve been told, to be comfortable leading themselves. Wouldn’t it be faster, and simpler, some have suggested, to have someone just take control and decide the development of the country, rather than going through the messy, risky, and protracted process of democracy? Some have even said to me that Ethiopians would rather complain about an imposed reality than take responsibility for creating a reality of their own.

What Ethiopia does with this pivotal moment in its history is up to the Ethiopian people themselves to decide. As an American, though, I can’t help but see some similarities between the choices and challenges my country’s founders faced 243 years ago, and the choices and challenges that the founders of a new Ethiopia are facing, including every Ethiopian here this evening. And with those similarities, I can’t help but feel an enormous sense of connection as well.

I hope my country’s story can offer hope and faith: hope that the future can be better than today, and faith that the Ethiopian people will make it so. I hope Ethiopians can take encouragement from the very things that seem so daunting to so many:  the colossal, messy, and essential process of putting this country’s destiny in the hands of its people, which is precisely what will make this country stronger, more vibrant, and more successful in the future. And I hope Ethiopians will not let the splendid diversity of their country obscure the fact that the vast majority of their fellow citizens want exactly the same things they do:  opportunity, tolerance, prosperity, peace, freedom, and respect.

Having those values as common ground is a wonderful foundation to build upon. And I believe – the United States believes – that Ethiopia can and will build, upon that foundation, a house in which all Ethiopians can thrive.  For our part, the United States government and people remain committed to helping Ethiopians build that house – to invest in the capacity of Ethiopia’s government, institutions, and people to achieve the future that Ethiopians want for themselves, and to overcome any challenges that might stand in the way.