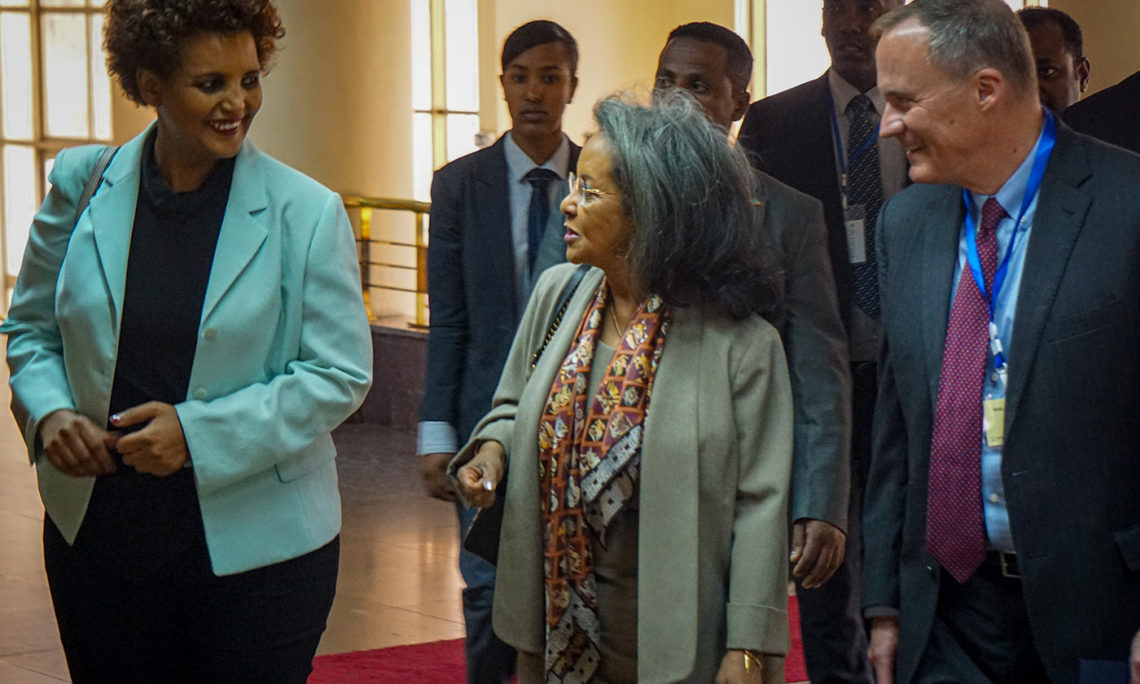 It’s a great pleasure and honor for me to be here today to highlight the importance of Ethiopia’s ambitious and essential political reforms – and especially the upcoming 2020 national elections – and to underscore as well the United States’ steadfast partnership with Ethiopia in support of these efforts.

Let me start by saying what I’ve said many times before:  how deeply inspired I am by the Ethiopian government’s reform agenda.

These reforms put the interests of the Ethiopian people front and center, and they have already made massive gains in broadening Ethiopia’s political and civil society space and creating economic opportunities.

Ethiopia’s success in conducting the upcoming elections in a credible and safe manner will be a critical step in the reform process.

As Ethiopia’s largest and deeply committed partner, the United States recognizes the importance of these elections to the Ethiopian people.

Just as the United States has invested in other areas critical to the Ethiopian government’s overall reform agenda – including rule of law, security, conflict mitigation, economic and business climate reforms, and the health and education of the Ethiopian people – we’re committed to working with the Ethiopian government and all Ethiopians of good will, as they prepare for this important milestone.

These elections belong to the Ethiopian people.

They’re administered by the government of Ethiopia and the National Electoral Board of Ethiopia on behalf of the Ethiopian people.

The United States and others are partners in this important process, but in the end, the process and the outcome can only belong to Ethiopians.

With these important guiding principles in mind, let me outline for you the American people’s commitment to supporting the elections.

First, we’re working with the National Electoral Board of Ethiopia to strengthen this critical institution at all levels, from the board down to the regional levels, and we commend Chairwoman Birtukan and the entire board and team on their important progress to date.

Through USAID, we’ve shared global best practices and international perspectives on how to hold successful elections.

With our partners, we’re supporting the training of nearly 300,000 Ethiopians on impartial monitoring, observing, analysis, and reporting on the electoral process.

This is important, because every citizen should be engaged and informed regarding the electoral process from the very beginning, and not just on voting day.

We’re mobilizing experts to support the development of a voting framework that emphasizes inclusion in the voting process.

This means supporting voter education for all Ethiopians, including underrepresented communities and special voters such as resettled community members, university students, and those residing in medical facilities.

We’ll work hand in hand with civil society organizations to provide civic education that will help the people of Ethiopia to meaningfully engage with the electoral process, and to ask the questions they need answered.

Elections are complicated, and disputes will inevitably arise.

This is normal in any democracy, and so the right administrative and judicial mechanisms must be in place ahead of time to deal quickly and fairly with any disputes.

We’re working with the Federal Supreme Court of Ethiopia so that it can assist the National Electoral Board of Ethiopia with electoral dispute resolution.

Of course, no credible democratic election is possible without political parties.

That’s why we’re dedicated to engaging with political parties from all regions, to assist with the nuts and bolts of political party organization.

Let me be clear:  the United States will not endorse any political candidates or political parties.

Rather, we’ll work with parties across the political spectrum to support what the Ethiopian government and people tell us they want: real political competition that fosters an open and competitive election based on policy platforms and ideas, so that voters have clear and genuine choices regarding who will lead their country.

Toward this end, we’ll be providing infrastructure and skills development for campaigning; guided practice for issue-based policy development; strategic communication skill-building; and lessons about international best practices to enable political parties to effectively and peacefully engage in the electoral process.

This will include supporting a gender analysis with the National Electoral Board of Ethiopia, focusing on the electoral legal framework, administration, and voter registration.

We’re also working with university students and other young Ethiopians to spearhead debates throughout the country on issues of national importance.

Finally, the media will play a critical role throughout the elections.

The essence of democracy is that it enables the people to hold their leaders accountable.

This simply can’t happen without journalists and media organizations that have the tools, and the courage, to shine a spotlight on politicians’ policies and actions.

That’s why we’re supporting training for both state and private media journalists throughout the country.

Our goal is to empower the media to report fairly, responsibly, and inclusively on the issues that matter to Ethiopians, while underscoring the rights and responsibilities of the media themselves during an election.

I could go on, but I hope this gives you a sense of both the breadth and the depth of the United States’ commitment to supporting Ethiopia’s new political space and its mandate to hold credible and safe elections.

We’ve backed this commitment with approximately $30 million in United States Government resources to date, with more on the way, focused exclusively on supporting Ethiopia’s 2020 elections.

If you’re wondering why we’re doing this, the answer is quite simple.

Elections, and the elections process, are the true lifeblood of any democracy.

Elections are the time when all citizens can directly express their aspirations and goals – for themselves, their communities, and their country.

The 2020 elections will be the first opportunity for Ethiopians to express their will – directly and clearly – under Ethiopia’s new reform process.

The elections will present an enormous opportunity, and they will pose a solemn test, for the people of Ethiopia and the future of their great country.

The United States firmly believes that Ethiopia’s political and economic reforms offer the surest and quickest path to securing the prosperous, stable, and politically inclusive future that Ethiopians want and deserve.

The upcoming elections will be an important milestone on this path.

Madame President, Madame Chairwoman of the National Electoral Board of Ethiopia, that’s why I am here today.

The government and people of the United States are ready to play our part in supporting this most important and foundational of democratic endeavors, and we’re very proud to do so.

Our Ethiopian friends and partners deserve no less.