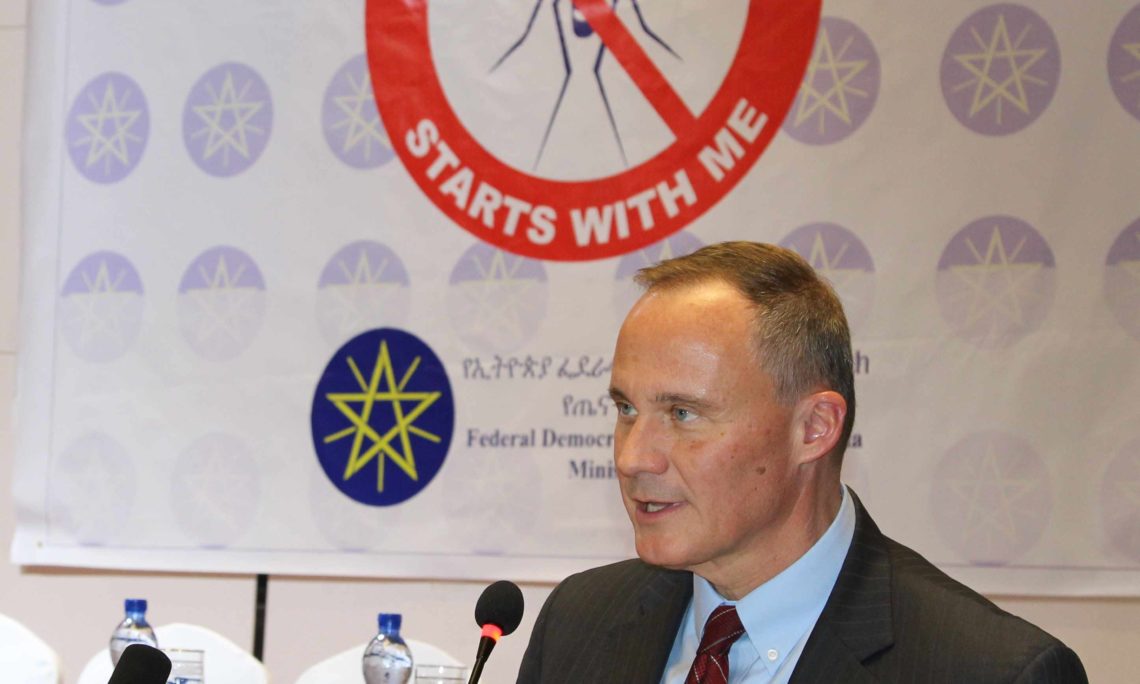 Michael Raynor
U.S. Ambassador to Ethiopia
at the Launch of the “Zero Malaria Starts With Me” Campaign
Skylight Hotel, Addis Ababa
October 1, 2019

I sincerely commend the Government of Ethiopia for its steadfast commitment and progress toward eliminating malaria, and offer my sincerest congratulations on the launch of this new program.

I also feel that the name of this new program – “Zero Malaria Starts with Me” – is particularly appropriate and well chosen.

Let me break down why.

First, “Zero Malaria” is indeed the right goal:  truly eliminating this terrible disease that debilitates so many individuals, families, and communities.

And it’s not an unreasonable goal.

Even today, despite all of the progress humanity has made, malaria still kills hundreds of thousands of people around the world each year.

But the good news is that global efforts to fight malaria and malaria-caused deaths are working, and Ethiopia is at the forefront of that success.

Through the outstanding efforts of the Federal Ministry of Health and malaria control program professionals at the regional, zonal, district, and community levels, malaria incidence and mortality rates in Ethiopia have fallen by more than sixty percent over the last decade.

And I’m proud that the United States Government, through the programs of USAID and the President’s Malaria Initiative, has supported this incredible progress.

Since 2007, the United States Government has invested more than 442 million U.S. dollars through PMI to help Ethiopia’s malaria control efforts.

Without a doubt, we and other partners have accomplished a great deal together in the fight against malaria.

For instance, the availability of insecticide-treated mosquito nets has increased substantially over the last 10 years.

Nets are our first line of defense against malaria, and when they’re used, they work.

Another factor in the decline of malaria in Ethiopia over the last ten years has been the Government of Ethiopia’s strong commitment to improving access to health services countrywide, often through the installation of community health posts.

And here, too, the United States has been, and remains, Ethiopia’s steadfast partner.

Among many other benefits, this partnership has helped ensure that rapid testing, diagnosis, and treatment for malaria are now widely available.

Children with fevers are now far more likely to be tested for malaria, and to receive the treatment they need to save their lives.

With successes like these, and using its Malaria Elimination Action Framework as a guide, Ethiopia is now moving from the control phase of its fight against malaria, to the elimination phase.

This is an outstanding accomplishment, but the reason we’re all here today is that there’s still more work to be done.

We can’t stop while anyone in is still debilitated or dying from malaria.

We cannot stop until there is zero malaria in Ethiopia.

Which brings me back to the name of this new campaign.

The first part of the title, “Zero Malaria,” is exactly right.

But so too is the second part of the title, “Starts with Me,” because to succeed, this campaign must have the support of every single Ethiopian.

No matter what the government and health experts of Ethiopia might do to eradicate malaria, and no matter how much the United States and other partners might support these efforts, the battle against malaria will not be won unless each Ethiopian does her or his part.

For example, those mosquito nets I mentioned before?

They work great, but only if individuals use them correctly and consistently.

That’s one small example of the need for individuals to take action and be responsible.

We also need individuals to seek immediate treatment for themselves and their children when they come down with fevers, by going to their nearest health post or government health center so that they can get tested to see if they have malaria and to receive appropriate treatment.

Individuals, working within in their communities, supportive and accountable to one another, protecting themselves and protecting their families, will bring malaria down to zero.

And, zero malaria in Ethiopia will promote not only the health of Ethiopians, but the economic development that will make all Ethiopians more prosperous as well.

It’s been exciting and gratifying to see the tremendous achievements already made in Ethiopia in reducing illness and death due to malaria over the last decade, through the partnership and commitment of everyone in this room and everyone you represent.

But now it’s time to leverage this partnership and commitment to completely eliminating malaria from Ethiopia.

The United States will remain firmly by Ethiopia’s side in this effort.

Among other things, this will include our ongoing supply-chain support to ensure that medicines, like life-saving anti-malarial drugs, are positioned where they’re needed most.

But as the title of this new program suggests, we also hope that individual Ethiopians will fully commit to supporting this effort as well.

In Ethiopia’s new era of promise and potential, every Ethiopian needs to be health and strong to build the future they want to see.

In closing, please let me stop where I started, by commending and congratulating Ethiopia, particularly the National Malaria Control Program, the Ministry of Health, and all of you working at the federal and regional levels, for your commitment to controlling malaria and eliminating it once and for all.

The United States government, and particularly, all of my colleagues at the U.S. Embassy in Ethiopia, are honored to continue as your partner in this important work.

Working together, we will eliminate this deadly disease and achieve zero malaria.