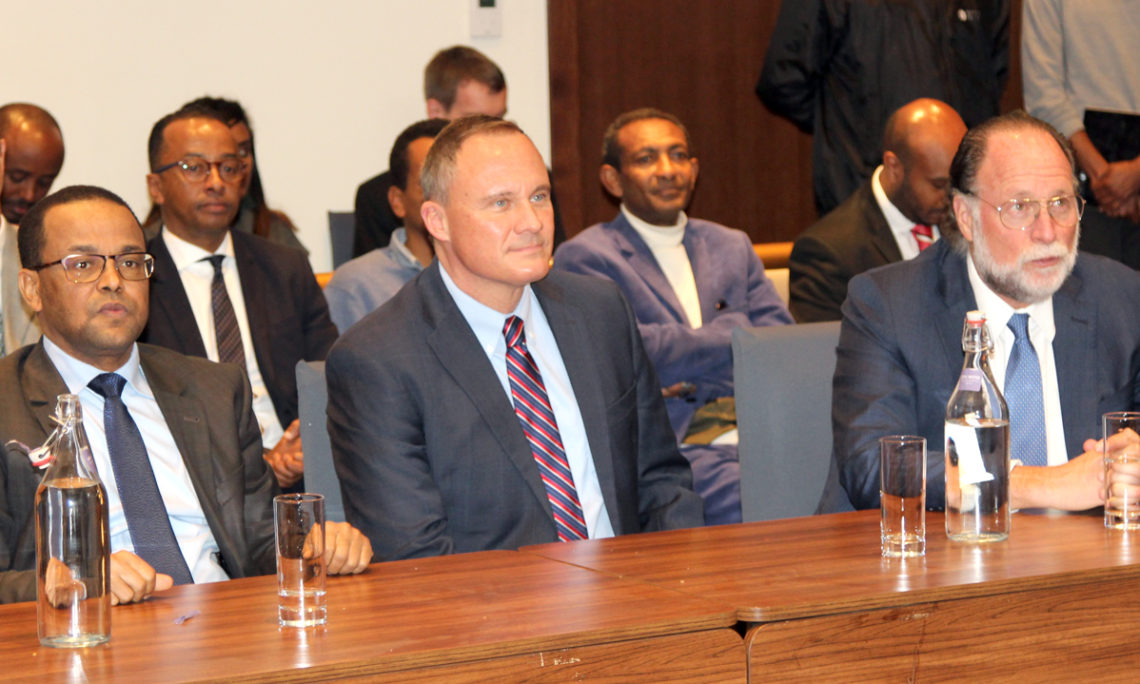 It’s a great pleasure and honor for me to be here this morning to highlight an important centerpiece in the partnership between Ethiopia and the United States in support of Ethiopia’s ambitious and essential economic reforms.

The United States is deeply inspired by the Ethiopian Government’s reform agenda, which puts the interests of the Ethiopian people up front, and which has already made massive gains in broadening Ethiopia’s political space and economic opportunities.

As these reforms continue to advance, they’ll ensure the durable cohesion and stability of the country as well.

As important as all aspects of Ethiopia’s reform agenda are, its economic goals are among the most pressing and consequential.

These are the reforms upon which a more prosperous future will be built, for all Ethiopians.

And quick and consequential progress in advancing Ethiopia’s economic fortunes will promote and sustain Ethiopia’s other reforms as well.

Re-setting an economy of Ethiopia’s size and complexity is far from easy work.

But Ethiopia has many strengths to build upon.

First and foremost, it has an exceptionally accomplished team of economic leaders and experts to drive this transformation, under the dynamic and visionary leadership of His Excellency Prime Minister Dr. Abiy Ahmed.

And Ethiopia’s stunning gains in education at all levels, notably in higher education with a particular focus on science and technology, have built an exceptionally strong labor pool.

At the same time, some of these gains were made at the cost of incurring significant external debt, and without commensurate progress in job-creation or private sector investment.

Today, Ethiopia’s reform agenda promises to build upon its past achievements while addressing its structural challenges, to catalyze private sector-led economic growth in the days ahead.

I’m particularly excited by the prospect for Ethiopia’s economic reforms to attract a critical mass of world-class private sector investments, like those from the United States, that bring not only job creation but strong labor practices, environmental standards, human capital development, and technology transfer.

This is the type of win-win economic activity that will ensure Ethiopia’s prosperity, and implementing economic reforms to facilitate such investment is the vital next step.

But this is an incredibly challenging task.

This process can only be led by Ethiopians, and indeed it’s being driven by an extraordinarily accomplished team of Ethiopian leaders and experts under the direction of Prime Minister Abiy Ahmed.

But it’s also a process that can and should benefit from the support of Ethiopia’s friends.

Sponsored by USAID, this initiative, called “Advancing Economic Diversification in Ethiopia,” is facilitated by Harvard University’s Center for International Development under the leadership of world-renowned Professor Dr. Ricardo Hausmann.

The accomplished team and proven methodologies under Dr. Hausmann’s leadership have an extraordinary record throughout the world of supporting countries’ efforts to identify promising areas of economic growth, to highlight constraints to such growth, and to devise strategies to address both the opportunities and the challenges.

The program here in Ethiopia is a sustained, three-year commitment by USAID, Dr. Hausmann and his team, and the Government of Ethiopia in support of Ethiopia’s economic reform agenda.

The U.S. Embassy is pleased and proud to have been granted the opportunity to facilitate this partnership, which falls squarely within the context of our broader support for Ethiopia’s government, as well as our long-standing investments in the Ethiopian people.

The United States has invested over three billion dollars in Ethiopia in the last three years alone.

These investments have strengthened our partnerships with the Ethiopian government and people to save lives, improve health and education, bolster food security and self-reliance, strengthen the energy and agriculture sectors, increase employment, and expand trade between our two nations, among many other areas of engagement.

Over the past year, we’ve enhanced these partnerships with over 100 million dollars in new resources directly focused on supporting Ethiopia’s reform agenda, and the program we’re celebrating today is a key component of this expanded engagement.

The United States firmly believes that Ethiopia’s political and economic reforms offer the surest and quickest path to securing the prosperous, stable, and politically inclusive future that all Ethiopians deserve.

The success of these reforms is also making Ethiopia an example worldwide of the opportunities awaiting any country, anywhere, when it commits itself – first and foremost – to promoting and defending the best interests of its people.

We’re honored by the trust and the spirit of partnership that Prime Minister Abiy Ahmed and his economic leadership team have expressed in allowing us to support the “Advancing Economic Diversification in Ethiopia” project, and I solemnly pledge the United States’ ongoing and steadfast support for Ethiopia’s reform agenda in the days ahead.