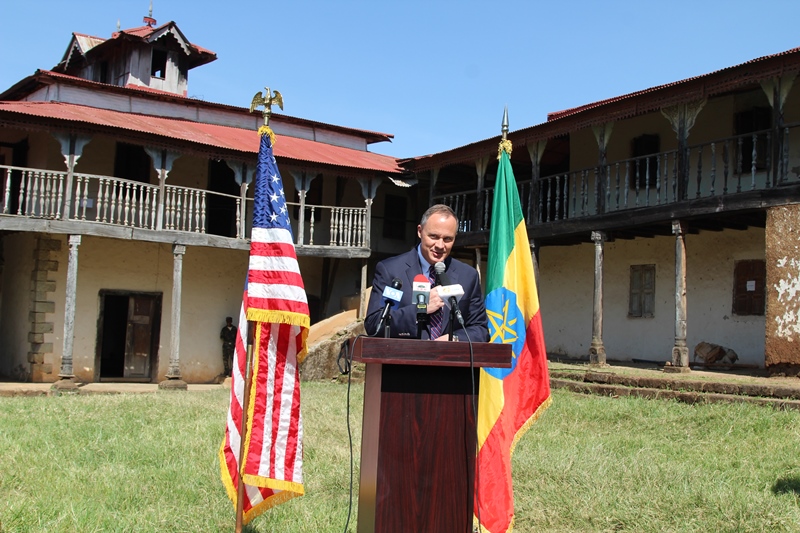 Thank you all for allowing me to be here this morning.

This is my first trip to Jimma, and I’m really excited to be here.

The first day of my visit was very much focused on Ethiopia’s future.

I had the chance to speak with students and faculty at Jimma University, with young members of our American Corner at the Jimma Public Library, and with local alumni of our flagship educational exchange program, the Mandela Washington Fellowship for Young African Leaders.

Today, my focus shifts to cultural heritage, but that doesn’t mean we’re not still talking about Ethiopia’s future.

Ethiopia is a country on the move, and the reform agenda of His Excellency, Prime Minister Dr. Abiy Ahmed, will ensure its success.

But as Ethiopia looks ahead, it’s incredibly important that it preserve and celebrate the rich history and diverse cultures that make up this unique country.

The preservation of cultural heritage is important for obvious reasons, like encouraging tourism and the economic growth that can come with it.

But it’s also important because our histories and cultures are part of what make us who we are.

In preserving them, we gain the benefit of understanding our history, how we got to this point, and from there, how we want to move toward the future.

Aba Jiffar Palace is one of the most important heritage sites in the Oromia Region, and beyond.

It represents a kingdom that made a lasting contribution to Ethiopia’s history and cultural legacy.

The palace, built in the 1880s by King Aba Jiffar the Second, is the oldest, largest and best-preserved surviving example of traditional wooden architecture in Jimma.

It’s a rare example of architecture that fuses traditional building technology from southwestern Ethiopia with the Indo-Arab architectural style that was common along the Indian Ocean.

Consequently, Aba Jiffar Palace is a symbol of the cultural and mercantile links between Ethiopia and the rest of the world.

It also has exceptional resonance as a symbol of the origin of Islam in this country.

As much as the rock-hewn churches of Gheralta and Lalibela, the walled city of Harar, the fortified settlements and terraces in Konso, and the castles of Gondar, the Aba Jiffar palace represents a history that made Ethiopia a country of incredible cultural diversity, and it reminds us that such diversity should be cherished as a source of shared pride.

With that in mind, I’m honored that the tenth U.S. Ambassadors Fund for Cultural Preservation project in Ethiopia will focus on helping to preserve this special place.

In recent years, AFCP has supported various projects in Lalibela – most recently the restoration of Bete Golgotha Mikael and Bete Gabriel Raphael – under the stewardship of the World Monuments Fund.

This new project at Aba Jiffar Palace is not only significant in own right, but also as a symbol of the ever-growing and true partnership between the United States and Ethiopia in heritage conservation.

In addition to the $125,000 provided by the U.S. Ambassadors Fund for Cultural Preservation, additional funds – approximately $220,000 – are being provided the Authority for Research and Conservation of Cultural Heritage (ARCCH) and the Oromia Culture and Tourism Bureau.

Together, these funds will make it possible to undertake the most comprehensive conservation project ever at Aba Jiffar Palace, including not only urgent timber conservation, but also significant work on masonry elements, drainage, roofing, fixtures, and fitting.

Funding will also go toward developing an on-site museum, landscaping, and preparing a maintenance plan to ensure the long-term integrity of this incredible structure.

This work supports a broader vision of creating a new cultural destination in the region that links the heritage of coffee, Aba Jiffar Palace, and Jimma into a broader context that reflects the extraordinary history, culture, and potential of this extraordinary part of Ethiopia.

As such, our collective efforts to preserve Ethiopia’s rich cultural heritage are also an investment in Ethiopia’s economic growth and lasting prosperity.

Another key aspect of this project is its investment in the capacity of Ethiopians to care for and preserve their own heritage.

Through the project, we will be training of a team of timber craftsmen who will be trained and empowered to design and implement a maintenance plan to care for this palace, and eventually other historical sites in Ethiopia, well into the future.

At the end of the day, that is the primary goal of all U.S. investments in Ethiopia:  to support the capacity of the Ethiopian people to build a better future for themselves.

The only payoff we look for in our investments is nothing more or less than to help Ethiopia be the strongest possible partner for shared peace, prosperity, and lasting stability in this country, this region, and beyond.

Before I close, I’d like to sincerely thank our partners in this important project, with whom we are honored to work:

It’s a great source of pride for me to represent the United States as we invest in preserving Ethiopia’s rich cultural heritage and the special history of Aba Jiffar Palace.