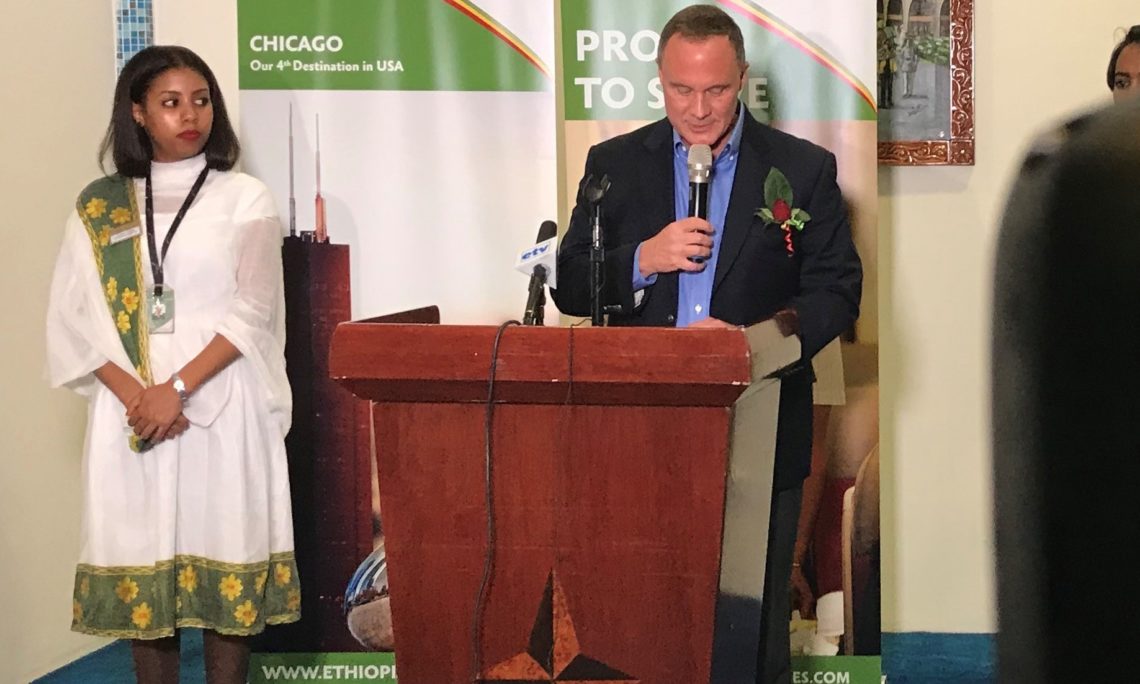 I’m very happy to be here in Chicago after the historic and very pleasant inaugural flight between Addis Ababa and Chicago on Ethiopian Airlines.

Congratulations to Ethiopian Airlines, Ato Tewolde Gebremariam, and his entire Ethiopian Airlines team, to Mayor Rahm Emanuel, the City of Chicago, and O’Hare International Airport, on the inauguration of this latest link between two vibrant cities and two great countries.

Chicago is one of America’s largest and most dynamic cities, with an incredible history to match.

Colonel John C. Robinson, an African American pilot in the early days of aviation, was the first black student at the Curtiss-Wright School of Aviation in Chicago.

Initially denied entry to the school because of his race, John Robinson took a job as a janitor at the school so he could listen in on classes.

He learned so quickly and so well that he convinced the school to change their policies and accept him as a student.

Fast forward a few years, and Col. Robinson had started his own aviation academy for African Americans.

He was invited to Ethiopia at the start of World War II to help Ethiopia establish its own air force, and to support the Ethiopian resistance to the Italian invasion of their country.

Col. Robinson’s efforts attracted media attention back in the United States and helped remove barriers to African Americans serving in the U.S. military, paving the way for the Tuskeegee Airmen to fight with such valor during the war.

After the war, Col. Robinson returned to Ethiopia and helped found Ethiopian Airlines, which has grown to become Africa’s largest airline and one of the fastest-growing and most successful in the world.

The partnership that Col. Robinson pioneered is alive and well today.

The aircraft we arrived on this morning was manufactured by Boeing, as were nearly three-quarters of the aircraft in Ethiopian Airline’s growing fleet.

Over the years, Ethiopian Airlines has flown all of Boeing’s major models, a number of which were firsts for Africa.

Ethiopian Airlines was the first to offer jet service in Africa in 1962 with a B720, and much more recently it flew the first B787 Dreamliner in Africa (and the second in the world).

In addition to being a significant customer for Boeing, Ethiopian Airlines purchases a great deal of other U.S. aviation equipment and technology as well, including jet engines and navigation systems.

The U.S. Government greatly appreciates Ethiopian Airlines’ sustained investment in these commercial partnerships, and the value the airline places on U.S. leadership in aviation technology and innovation.

The new route we’re celebrating today will bring even more people from Ethiopia and Africa to enjoy everything that the great city of Chicago and the surrounding region have to offer.

Congratulations again on this wonderful occasion, and thank you for helping bring our two countries and these two dynamic cities even closer together.