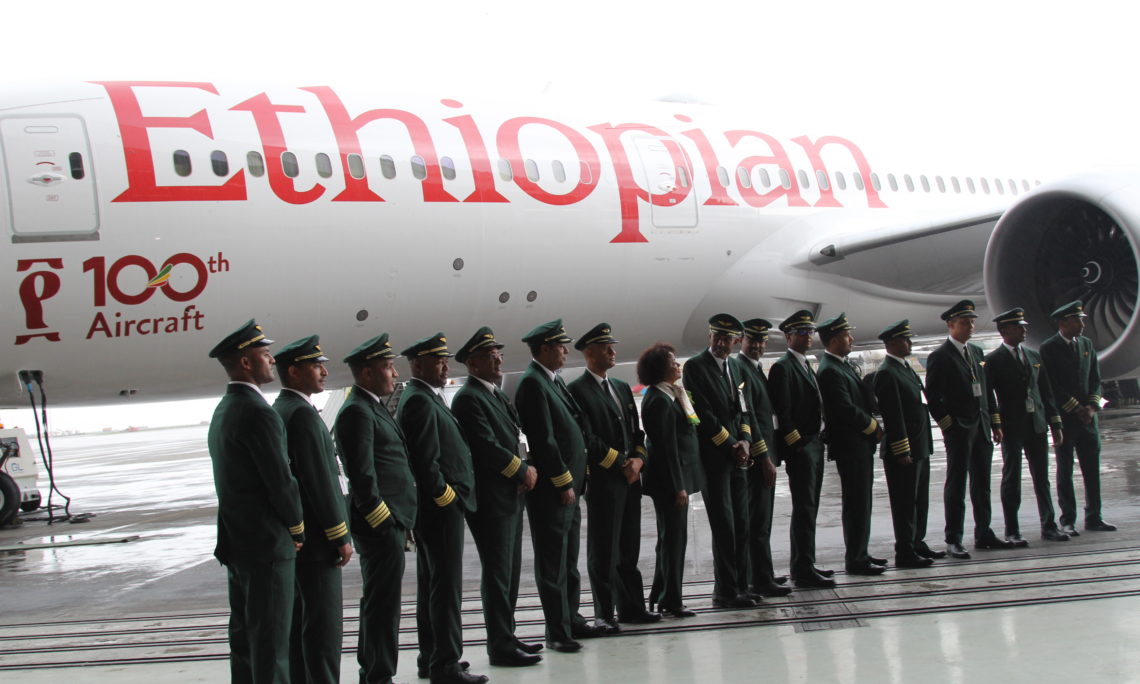 Thank you so much for allowing me to join this very exciting moment for Ethiopian Airlines and Ethiopia.

The arrival of the 100th aircraft in Ethiopian Airlines’ expanding fleet is truly something to celebrate, and I congratulate the Government of Ethiopia, Ato Tewolde Gebremariam, and his entire team on this extraordinary accomplishment.

But as impressive as this number is, even more impressive is what it represents.

It represents Ethiopia’s ability not only to compete, but to thrive, in the world’s most important and challenging economic sectors.

And it represents the exceptional achievements of Ato Tewolde and his superb team in showing not only Ethiopia, but the world, how to run an airline right.

This includes not only the remarkable and rapid expansion of the airline, but the exceedingly rare ability to do so profitably.

Ethiopian Airlines is showing the world what’s possible in Ethiopia:  that world-class businesses can develop here, and that Ethiopia provides fertile ground for such businesses to succeed.

But it’s also a great moment for the United States as well.

I’m honored to be a custodian of the rich aviation history that Ethiopia and the United States share, dating back to Colonel John C. Robinson’s pioneering commitment to Ethiopian aviation in the 1930s, and the role Trans World Airlines played, starting in the 1940s, in supporting the establishment of a national airline in Ethiopia.

You may have noticed that this 100th aircraft is a Boeing, an example of state-of-the-art American aviation technology at work.

In fact, I’m proud to note that 72 of Ethiopian Airlines’ 100 airplanes were manufactured by Boeing, and these aircraft carry over three-quarters of the airline’s passengers.

And the very first planes Ethiopian Airlines flew, after its establishment in 1946, were Douglas C-47s made by a U.S. company now owned by Boeing.

Yesterday, I took part in a ceremony commemorating the legacy of Col. John Robinson, an African American hero who first came to Ethiopia in the 1930s to contribute to the establishment of Ethiopia’s aviation sector and to support Ethiopia’s resistance to the Italian invasion at the start of World War II.

In the years since then, the United States has been a proud and committed partner to Ethiopian Airlines in a number of ways.

Just a few weeks ago, I was at this airport with Ato Tewolde to celebrate a U.S. Government donation of advanced baggage-scanning equipment, the first deployment of such technology to Africa and the latest step in a longstanding partnership to support our two nations’ shared resolve to maintain the highest standards of aviation security.

And commercial relations between U.S. firms and Ethiopian Airlines remain strong as well.

Ethiopian Airlines purchases not only aircraft from Boeing, but a great deal of aviation equipment and technology from other U.S. firms as well, ranging from navigation to flight tracking systems.

Ethiopian Airlines’ sustained investment in these commercial partnerships, and the value it places on U.S. leadership in aviation technology and innovation, is something the United States Government appreciates and values immensely.

In the end, this new aircraft that we’re celebrating today – as spectacular as it is – is also just the latest step in an aviation partnership between Ethiopia and the United States that dates back over 80 years.

And our aviation partnership, as important as it is, falls within the broader context of an overall U.S. -Ethiopia partnership that is more robust than ever.

A partnership that the United States is committed to sustaining through our ongoing investments in Ethiopia’s economic growth, development, good governance, food production and security, education and health systems, and security.

The U.S.-Ethiopian partnership is a true friendship, and like all true friendships, we want our friend to be as strong, inclusive, stable, and prosperous as possible.

The growth of Ethiopian Airlines is contributing enormously to these same goals.

So from where I sit, the success of this airline is impressive and important not only in its own right, but also because of the role it plays in achieving the goals that Ethiopia and the United States share for this great nation.

Congratulations to Ethiopia and to Ethiopian Airlines, to Ato Tewolde and his team, for your tremendous success, and for setting a powerful example of what is possible when we set ambitious goals and work hard to achieve them.