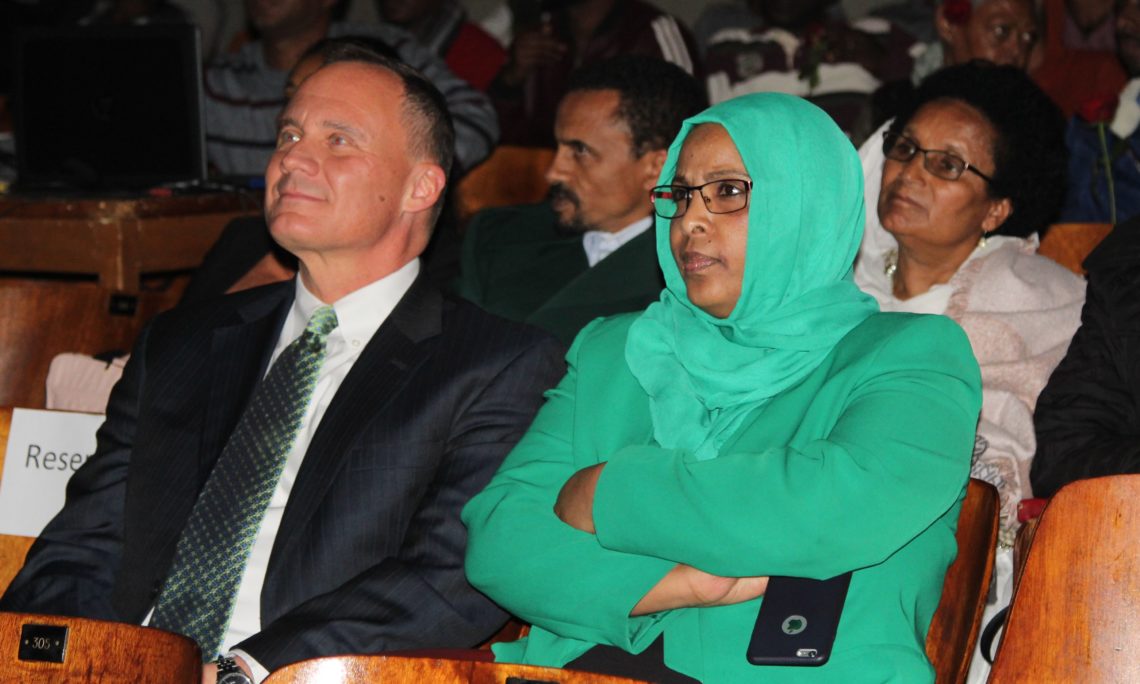 Hello, and thank you very much for joining us this evening.

And particular thanks to Her Excellency Fozia Amin, the Minister of Culture and Tourism, for being an important part of this great occasion.

We’re here tonight to announce and celebrate the winners of the “Our Ethiopia” video competition.

And what an amazing moment in Ethiopia’s history for this contest to take place.

The U.S. Embassy’s previous video competitions focused on topics like women’s issues and inclusivity for persons with disabilities.

We were very impressed by the creativity, skill, and insightfulness of Ethiopian filmmakers in producing stories around these topics in ways that raised awareness and encouraged constructive conversations.

When we announced our latest competition, called “Our Ethiopia,” in January, Ethiopia was, in some ways, a very different place.

In January, we were worried about where Ethiopia might be heading.

Rising divisions and increasing violence, among other concerns, posed a growing threat to the country’s progress and its promise for the future.

The U.S. Embassy chose the topic “Our Ethiopia” to encourage Ethiopian filmmakers to talk about their Ethiopia – to tell the story of this country’s longstanding heritage of respect and tolerance for diversity, and to celebrate, value, and uphold the historical and cultural richness of this country.

Since January, Ethiopia has embraced so many changes that seemed unthinkable just six months ago.

After we announced this competition, former Prime Minister Hailemariam Desalegn stepped down voluntarily in a historic, and perhaps underappreciated, show of courage and statesmanship in peacefully relinquishing power to make way for meaningful reforms.

That was followed the very next day by the implementation of another State of Emergency, against which the United States spoke in unusually blunt terms.

What followed, of course, was the selection of His Excellency Prime Minister Dr. Abiy Ahmed, which the United States continues to see as recognition by the Ethiopian government of the aspirations of the Ethiopian people for constructive change, for a more inclusive political system, and for the protection of individual rights promised in the Ethiopian constitution.

Since then, the change has been both dizzying and concrete.

Crowds of peaceful protesters have been allowed to come together, both to support and resist proposed changes.

Young Ethiopians have posed for pictures with smiling soldiers in front of governmental “no photography” signs.

The space for public discussion has significantly expanded.

And the Eritrean flag has flown in the streets of Addis Ababa, as two estranged countries come together to pursue a peace that can have positive implications for the entire region.

It’s a very exciting time to be in Ethiopia.

And given the optimism of this moment, the theme of this video competition, and the messages of unity and tolerance these videos teach us, are perhaps more relevant than ever.

We hope these videos will encourage all Ethiopians to use their new and expanding liberties toward peaceful and constructive engagement, and to appreciate and defend the unity of this country rather than finding pretexts to divide it.

Democracy is not just about rights and freedom — it’s about collective responsibility, and about taking ownership of your country and your future.

In a democracy, we all have responsibility for our actions and our decisions.

As Ethiopia pursues democratic reforms and seeks to increase political inclusivity, I hope the Ethiopian people will step up and step in.

I hope they will have thoughtful conversations about the direction they want their country to take.

I hope they will support and invest in the institutions that need to be strengthened to ensure that reforms are lasting and effective.

I hope they will stand firm in upholding their values in the face of challenges.

And yes, there will be challenges.

Ethnic conflict has added to the already high number of displaced people, which  now exceeds two million around the country.

We continue to get reports of citizens seizing private property and attempting to take justice into their own hands against perceived unfairness.

And in their enthusiasm for the reform effort, we see some who would suppress those who wish to raise concerns.

To be at its strongest, Ethiopians must defend space for all constructive and peaceful views, even those they disagree with.

For this to happen, Ethiopia needs the voices of tolerance, rule of law, and peaceful conflict resolution to be stronger than the voices advocating violence and division.

It requires all Ethiopians to speak not only with their words, but with their actions.

It will take time for the inspiring and impressive reform proposals voiced by the Prime Minister to take shape and make their way into practice at all levels.

But you can help the process along.

This is your Ethiopia, and your chance to set this country’s direction on the path you want to see.

Now is the time to uphold Ethiopia’s long history of diversity and tolerance.

Now is the time to take democracy from aspiration to practice, and it will be up to each of you to do that.

The United States of America stands with you, and we are ready and eager to help the reform efforts succeed.

But this is your Ethiopia.

The top ten videos we’ll be screening momentarily represent visions of your fellow citizens for their country.

If you’re like me, these films will impress you on many levels, but I’ll just name three.

First, for their artistry:  aesthetically and technically, these are simply lovely films.

Second, for the thoughtfulness and sincerity of their messages.

Harnessing the power of brevity, they distill into just a few moments some very important messages – about the value of diversity, of sharing, of cooperation, and about the strength of unity.

And third, because these films are uniquely, and unmistakably, Ethiopian – in their aesthetics, their optimism, their pride – and their visions and hopes for this country.

As you watch these films, I encourage you to consider on all these levels how these films match up with your own experiences and visions for Ethiopia, and what we can collectively do to safeguard and strengthen this Ethiopia for the future.

From where I stand, the future looks bright for Ethiopia, and for the partnership between Ethiopia and the United States.

If all Ethiopians think about the future of “Their Ethiopia” and commit themselves to this future, and if the videos from the “Our Ethiopia” contest help them a little bit to do so, I’m confident that the bright future we all want for this wonderful country, and its wonderful people, will become reality.