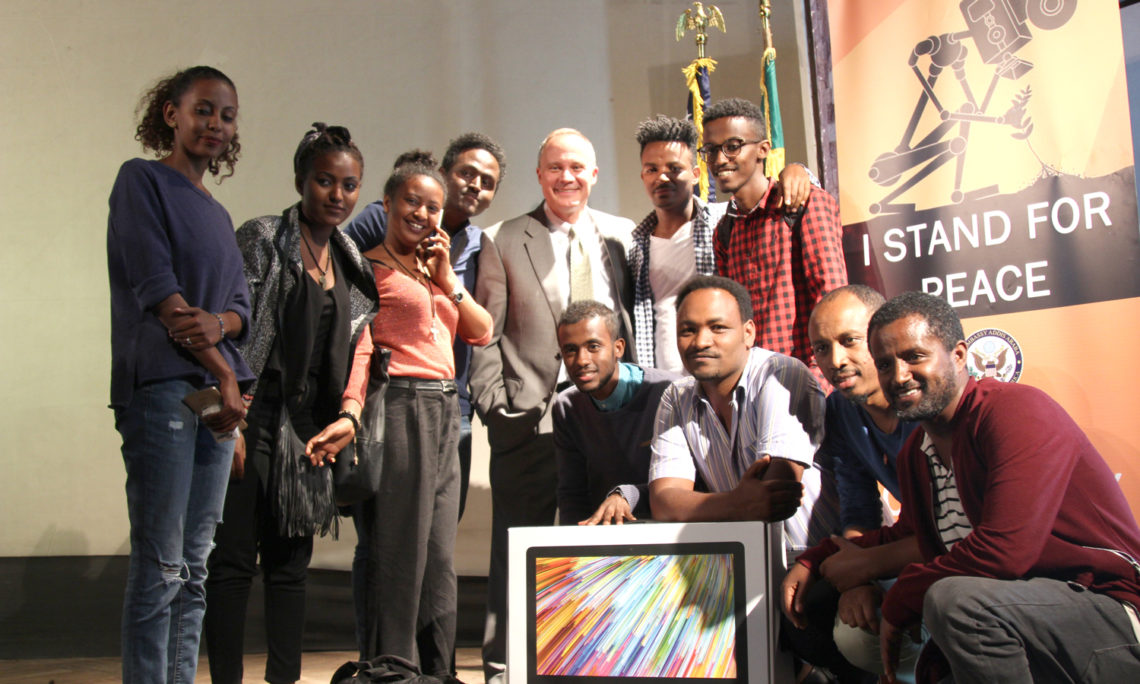 Before we begin, I want to say that the United States joins Ethiopia in its national day of mourning in honor of former president Negasso Gidada.

For the fourth year in a row, the U.S. Embassy has had the great pleasure and privilege of sponsoring a competition of short films that’s open to all Ethiopian filmmakers, and that focuses each year on a different topic that Ethiopians tell us matters to them.

Previous themes include women’s empowerment, the inclusion of persons with disabilities, and visions of Ethiopian unity.

This year, the theme is “I Stand for Peace,” and it inspired 127 entries from across the country, including Adama, Addis Ababa, Debre Tabor, Dessie, Dire Dawa, Gondar, and Jimma.

“I Stand for Peace” asked filmmakers to explore what peace means to them, why peace is important, and how peace can be achieved – and it asked them to do all this within three minutes of film.

A daunting challenge, but one to which all 127 filmmakers rose with spectacular results.

In viewing these films, I was reminded anew of the exceptional creativity, skill, and insightfulness of Ethiopian filmmakers, and was inspired by their ability to produce stories that entertain and inspire while provoking thought and encouraging constructive conversations.

That’s one of the great things about film – it has the ability to touch us on every level in very personal ways, through images, sound, character development, challenging ideas, and human emotion.

And few topics are more human and urgent than the concept of peace, or more specifically, the impact on our societies when peace is uncertain, imperiled, or absent.

Ethiopia is in the midst of a fundamental transition – an extraordinary journey toward inclusive democracy, economic empowerment, and organic and durable stability.

Any change – even highly hopeful and positive change – comes with some degree of uncertainty and disruption.

This is no less true with a transformation as monumental as the one underway in Ethiopia.

Ethiopia’s transition is ultimately about empowering the Ethiopian people, and entrusting them with deciding the direction of their country.

This transformation asks the Ethiopian people to take on new roles and responsibilities, on behalf of themselves and their country, and to make thoughtful choices about how they will use their freedoms.

In the United States, the American people are entrusted with some of the broadest freedoms anywhere.

Our free speech protections, for example, are so strong that they extend even to ideas that go against the very ideals of our constitution and founding fathers.

These freedoms were granted with the expectation that most Americans will choose to use them wisely, and will unite against harmful ideas even as they defend people’s rights to express them.

In any country, there will always be a minority – sometimes a very vocal minority, that calls for division, exclusion, and hatred.

But I believe most Ethiopians, like most Americans, want something better than this, namely fairness, opportunity, tolerance, inclusion, and – yes – peace.

Wanting those things, of course, is not enough to achieve them.

We have to stand for these ideals, defend them, and prioritize them in our lives, our communities, and our nations.

That’s where the idea for this year’s video competition comes from.

Last year, with incidents of violence taking place in different parts of the country, we launched the “I Stand for Peace” hashtag campaign on our U.S. Embassy social media platforms.

The response from Ethiopians was impressive, with many thousands of likes, shares, and comments from people throughout the country expressing their commitment to stand for peace in Ethiopia.

This video challenge takes that social media campaign a step further, by tapping into the creativity, skills, and wisdom of Ethiopian filmmakers who are showing us all what it means to stand for peace.

From those many wonderful films, we will be screening the top nine finalists tonight.

You’ll see that these films take different approaches to standing for peace, and that’s great, because they remind us that we can be diverse in our perspectives and approaches while will being united in our goals.

For my part, I hope it will be a future that is prosperous, inclusive, and stable, because this is the future that will benefit all of the Ethiopian people.

Thank you to everyone who participated in this year’s film competition.

All 127 entries for “I Stand for Peace” clearly demonstrate the talent and creativity of Ethiopian filmmakers.

And thank you to our judges, who generously shared their time and expertise to choose the finalists we’ll see tonight.

Christine and Shana are visiting Ethiopia as part of the U.S. Department of State’s American Film Showcase program.

In addition to helping judge this competition, they’ve been sharing their expertise with Ethiopian counterparts and their own films during the Addis International Film Festival.

Please join me in thanking them, and in welcoming them here tonight.

Lastly, I’d like to sincerely thank the Minister of Peace for taking the time to be with us this evening, and for sharing in the inspiration of the films we’re about to see.

And now, I’d like to invite His Excellency, Mr. Kefyalew Tefera, State Minister for Capacity Building and Modernization Sector, Ministry of Peace to share a few words