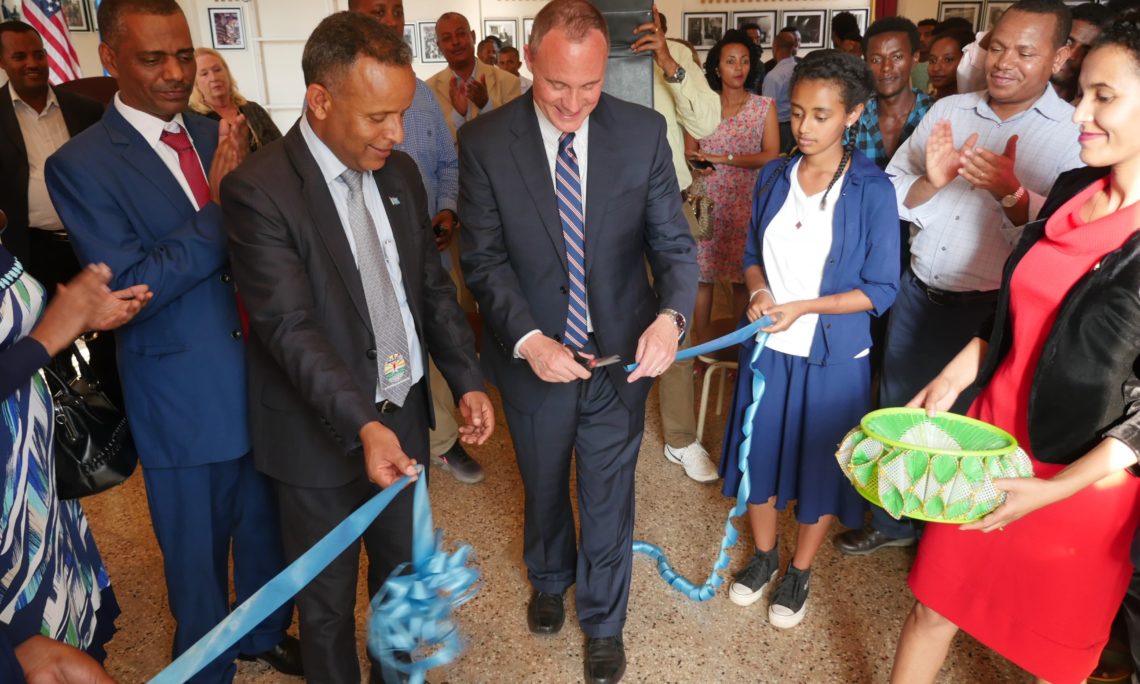 I’m so excited to be here with you in Bahir Dar, on my first visit outside of Addis Ababa.

I’d like to thank Dr. Baylie (BAI-lay), President of Bahir Dar University, for partnering with us in bringing this photo exhibition about the life of President John F. Kennedy to you.

President Kennedy was the 35th President of the United States, from January 1961 until he was assassinated in November 1963.

He’s remembered for many things, but perhaps most of all for being a visionary for a better future.

His belief that we should push the boundaries of what is possible led the United States to be the first country to put a human being on the moon.

In his conviction that the United States should lead the world in innovation and technological capacity, he understood that lofty goals require an investment in the future – and that investing in a country’s future requires investing in its young people.

So as we honor President Kennedy’s legacy, it’s fitting to talk about Ethiopia’s youth and the potential they represent.

Although I’ve just been in Ethiopia for a few days, and in Bahir Dar for only a few hours, I’ve already learned a lot about how the U.S. Embassy and our partners are working to help Ethiopia’s youth succeed, and I’ve already developed a great appreciation for the incredible potential of the young people in Ethiopia, and particularly in Bahir Dar.

Just before coming here, I visited our Bahir Dar American Corner, where I met with the alumni of our Girls Can Code program.

The Girls Can Code program is a great example of the kind of investment we are making in Ethiopia’s youth.

Girls Can Code has helped240 11th grade girls in five cities gain skills such as computer coding, web development, and application development, which will help them to pursue their interest in computer science at the university level and beyond.

As part of this program, we opened a new Maker Space at the American Corner, which is open to the public and offers hands-on experience with some of the latest technologies.

I can’t wait to hear what the Girls Can Code graduates and others do when they put their new skills to use with these tools.

You never know where the next big idea will come from.  Why not Bahir Dar?

Earlier today, I also had the honor of meeting the presidents of Bahir Dar and Gondar Universities, who are launching a significant partnership with the U.S. Embassy to bring up to 40 American scholars to work at their universities over the next two years.

Not only will these scholars teach in the classroom, they will share best practices with their Ethiopian colleagues, support Ethiopia’s impressive commitment to expand access to higher education, and strengthen the culture of research that is so important to leading universities around the world.

He then created some opportunities for young people to answer that call – ways that have also immeasurably deepened the U.S.-Ethiopia partnership.

One of these was the creation of the Peace Corps in 1961.

Another of President Kennedy’s legacies that is alive and well in Ethiopia is USAID.

USAID was created in 1961 to end poverty and help build resilient, democratic societies capable of building a better future on their own.

USAID remains focused on that effort today, including a range of programs that specifically work to strengthen the capacity of Ethiopia’s youth.

One program, called “Building the Potential of Youth,” is providing unemployed and underemployed youth ages 15 to 19 in rural areas with tools to increase their income and economic self-sufficiency.

USAID’s efforts at stopping the spread of HIV reach up to 500,000 Ethiopian youth each year with health and prevention services.

And USAID also works to get youth more involved in their communities and democracy.

For example, our new Sustained Dialogue Activity will help youth at five universities, including here in Bahir Dar, to create a culture of trust and collaboration to increase resilience to events that might otherwise trigger misunderstandings or even unrest.

And when it comes to preparing for the future, I can’t go without mentioning the Young African Leaders Initiative, or YALI.

YALI is the U.S. government’s signature effort to invest in the next generation of African leaders.

The program comprises three components:  the Mandela Washington Fellowship, which provides six-weeks of academic and leadership training in the United States; the YALI Network, which offers free online educational materials and virtual events; and the Regional Leadership Centers, which offer nine-week training programs, including mentoring, and networking across the continent.

I just had the pleasure of welcoming this year’s Washington Mandela Fellows back from the United States, and  I can say without hesitation that they are some of the most thoughtful, dynamic, and impressive people I’ve ever met.

As they return to Ethiopia from their time at American universities, they join hundreds of other alumni of our exchange programs who are already working to help Ethiopia in areas like civic leadership, public management, and business and entrepreneurship.

One such person is Professor Alemfrie [AH-lem-free] Chekole [CHEE-koh-lay], who is leading the Entrepreneurship and Development and Incubation Center at Bahir Dar University.

She will be sharing what she learned about entrepreneurship from her 2017 Mandela Washington Fellowship, and helping to promote small business incubation here in Bahir Dar and the wider region.

She and her peers, and Ethiopia’s youth nationwide, are the future of this country.

As we mark the 100th anniversary of President Kennedy’s birth this year, one of the best ways we can honor his legacy is to help all Ethiopian youth achieve their fullest potential.

In this, and in many other things, the United States remains Ethiopia’s steadfast partner.

Thank you all for coming, and enjoy the exhibition.