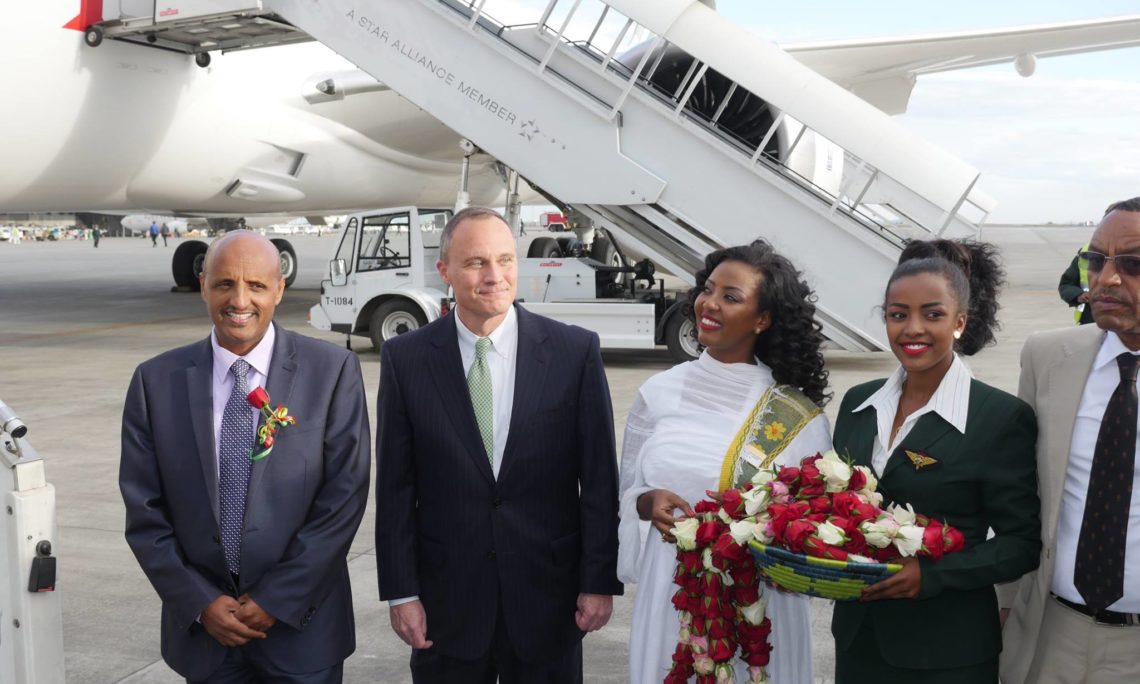 It’s a tremendous pleasure and honor for me to be here this afternoon to celebrate the arrival of this newest addition to Ethiopian Airline’s fleet, which symbolizes both the extraordinary progress and growth of Ethiopian Airlines as well as the latest in American aviation engineering.

Having spent much of my career in Africa, I’ve had a front row seat for Ethiopian Airlines’ remarkable growth in becoming the premier carrier for the continent and an important global player in the industry.

And it’s been gratifying for me to witness the role that American technology and aviation know-how have played in supporting Ethiopian Airline’s progress along the way.

The arrival of this magnificent aircraft is only the latest chapter in the long and distinguished partnership between the United States and Ethiopia in the field of aviation.

After significant contributions to Ethiopia’s air defenses during the War, Colonel Robinson returned in 1945 to help rebuild the Ethiopian Air Force and to establish an aviation training school.

1945 was also the year when the Government of Ethiopia signed an agreement with the U.S. carrier Trans World Airlines, or TWA, to help establish its national airline.

As a result, many of Ethiopian Airlines very first pilots, technicians, and administrators were American, and the airline has had American aircraft in its fleet throughout its history, starting with the Douglas C-47.

So the United States takes a small amount of pride in helping to launch this extraordinary enterprise.

But Ethiopian Airlines subsequent success is entirely Ethiopia’s to claim.

From those early beginnings, Ethiopian Airlines now offers flights to destinations around the world, including, I’m proud to say, to three great American cities:  New York, Washington, and Los Angeles.

Ethiopian Airlines helps link the world, and it’s a vital bridge between our two nations as well, supporting growth in trade, investment, tourism, and educational and cultural exchanges, while helping to deepen the connections and enduring friendships between our peoples.

Ethiopian Airlines has also become one of the most significant sources of business cooperation between Ethiopia and the United States.

This relationship of course includes the airline’s significant investments in Boeing aircraft, but also its strong partnerships with other American companies like Sabre, GE, Honeywell, and AAR.

These companies are committed to partnering with Ethiopian Airlines to support its continued growth and success.

To say that these partnerships are mutually beneficial would perhaps be an understatement.

The benefits for the United States in terms of economic growth and job creation are clear.

As to the benefits for Ethiopia of having an increasingly global airline using state-of-the-art American technology, well, let’s just say the sky’s the limit.

From developing Addis Ababa as a regional and global transit hub, to expanding opportunities for tourism, to making Ethiopia more accessible for global trade and investment, the impact of Ethiopian Airlines’ success extends well beyond the airline itself.

Ethiopian Airlines’ success will expand economic opportunities across the breadth of Ethiopian society, and here, too, the United States is a committed partner to Ethiopia, promoting Ethiopian prosperity through our broad array of development, economic growth, humanitarian, and commercial engagement.

In the end, the success of Ethiopian Airlines is ultimately just one symbol – albeit an important and impressive one – of the value and potential of the U.S.-Ethiopian relationship.

If Colonel John Robinson could bridge the 70-plus years between 1945 and today, I expect he would be amazed by, and perhaps a little proud of, the success of Ethiopian Airlines.
And I can only imagine what still-greater successes will be celebrated 70 years from now – for Ethiopian Airlines, for Ethiopia, and for the U.S.-Ethiopian partnership.

Congratulations to you all on this milestone in Ethiopian Airline’s growth and success, and thank you for permitting me to be a part of this wonderful celebration.