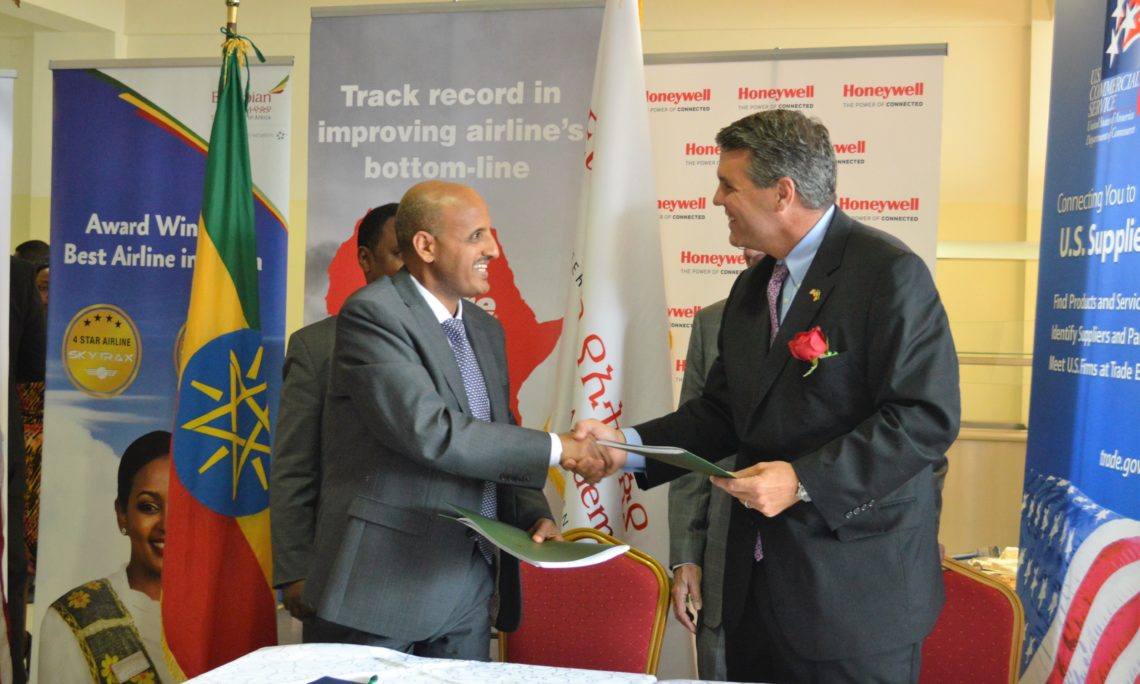 During the visit, Ethiopian Airlines announced deals with General Electric (GE) and Honeywell and a training grant from the U.S. Trade Development Agency (USTDA). USTDA is partnering with the Sabre Corporation to provide an Airline Solutions Training Program Technical Assistance grant for Ethiopian Airlines Enterprise, which could leverage up to $21.2 million in financing to support the procurement of airline information technology solutions, consulting services, and industry best practices. Ethiopian Airlines is procuring twelve General Electric engines valued at $444 million, as well as a separate $473.5 million 10-year maintenance contract. Ethiopian Airlines has also signed two contracts with Honeywell – a $10.2 million deal for the Bole Airport expansion and a $7.2 million Auxiliary Power Unit (APU) service contract.

“Ethiopian Airlines is a great partner for the U.S. Department of Commerce and the U.S. business community,” said Undersecretary Kaplan. “This is evidenced by their close collaboration with several U.S. firms including Boeing, whose aircraft make up roughly seventy percent of its fleet, and General Electric, which we just announced will provide Ethiopian Airlines with nearly a billion dollars’ worth of aircraft engines and maintenance services. I am visiting Addis Ababa with members of the President’s Advisory Council on Doing Business in Africa to meet with Ethiopian government and business leaders to explore ways to deepen commercial engagement between the United States and Ethiopia.”

Regarding the deal, Group CEO Ethiopian Airlines, Mr. Tewolde GebreMariam said, “Ethiopian is the most significant source of US –Ethiopia business relations. These relations cover the full spectrum of commercial aviation sector, ranging from aircraft, engines, navigation to flight tracking systems. These latest deals further solidify the commercial relations between U.S. firms and Ethiopian Airlines Group and amount to billions of U.S. dollars in business and thousands of jobs. With Ethiopian Vision 2025, fast growth, more business collaborations lie in the years ahead.”

Ethiopian Airlines’ fast, profitable and sustainable growth and outstanding leadership sets a powerful example of the economic potential in Ethiopia – one of the world’s fastest growing economies.  For over 70 years since the Airline’s founding, American companies and the U.S. government have enjoyed successful partnerships with Ethiopian Airlines, demonstrating the incredible potential of cooperation between our countries.

The President’s Advisory Council on Doing Business in Africa (PAC-DBIA), composed of 23 U.S. companies across a variety of sectors, is visiting Ethiopia, Kenya, Côte d’Ivoire, and Ghana to gather insight into market opportunities and challenges faced by U.S. businesses, which will inform their subsequent recommendations to President Trump on how to strengthen bilateral trade and investment with these countries.