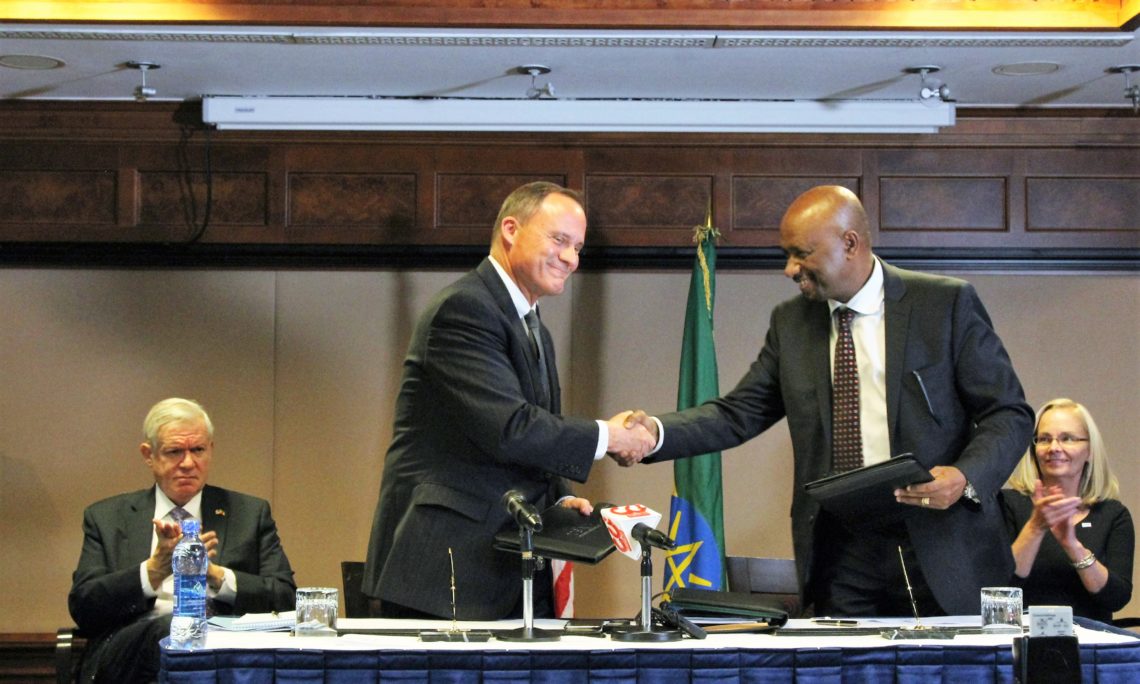 On June 26, 2018, Power Africa signed a Memorandum of Understanding (MOU) with the Government of Ethiopia, reaffirming commitment to increasing electricity access in Ethiopia through private sector-led projects. Power Africa is a U.S. Government-led partnership coordinated by the U.S. Agency for International Development (USAID).  Launched in 2013, Power Africa aims to add at least 30,000 megawatts (MW) of new electrical power capacity and 60 million electrical connections across sub-Saharan Africa by 2030 by unlocking sub-Saharan Africa’s wind, solar, hydropower, gas, geothermal, and other resources.

To help achieve Ethiopia’s goals of expanding access to electricity, Power Africa supports the development of new generation and connections, rehabilitation of the distribution system, self-sufficient utilities, and delivering power to the majority of the population living off-grid.

The event was attended by Ethiopia’s Minister of Water, Irrigation, and Electricity, Dr. Engineer Seleshi Bekele, U.S. Ambassador Michael Raynor, U.S. Under Secretary of Commerce for International Trade, Gilbert Kaplan, and USAID/Ethiopia Mission Director, Leslie Reed.  At the ceremony, the Ambassador highlighted the importance of sufficient, reliable, and affordable power for the country’s economic growth. He said, “We hope that these efforts will support the ability of key actors in Ethiopia’s power sector to identify strong, reliable partners in the private sector who can bring expertise, quality, and value to energy projects and infrastructure investments”, and added that the memorandum recommits the United States “to work as a partner in helping Ethiopia achieve its goals in energy production and transmission – a key step toward unlocking the rich economic potential we see here.”

The MOU signing follows an announcement from the U.S. Trade and Development Agency (USTDA) of Ethiopian Electric Power’s adoption of a USTDA- funded procurement manual, which will help EEP use life-cycle cost analysis to obtain high-quality, sustainable infrastructure through public procurement.