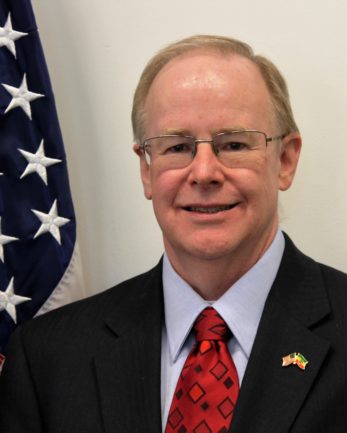 Mr. Renz is the Deputy Chief of Mission at the U.S. Embassy, Addis Ababa, Ethiopia. Previously he served as Counselor for Political and Economic Affairs at the same Embassy.

Mr. Renz has over 25 years in the U.S. Foreign Service.  He recently served as a unit chief in the State Department’s Office of Central African Affairs in the African Affairs Bureau, where he focused on the Central African Republic and managed issues pertaining to several other countries in the region.  He was a Senior Advisor in the Office of Communications and Information Policy, responsible for launching the Global Connect Initiative to help connect 1.5 billion new users to the Internet by 2020.  He has held leadership positions in several of our embassies, serving as Counselor for Economic Affairs in Nairobi, Kenya and Kabul, Afghanistan, as the Economic Chief in Dhaka, Bangladesh and Nicosia, Cyprus and as an economic officer in The Hague, the Netherlands.  He led the Bilateral Investment Treaty Negotiations desk in the Office of Investment Affairs in Washington, D.C.  Mr. Renz also served as the Deputy Country Public Affairs Officer and press spokesperson in Abuja, Nigeria.

Prior to joining the Foreign Service, Mr. Renz practiced international trade and distribution law in Washington, DC for eleven years.  He received his law degree from the Washington College of Law, American University and his BA in history and philosophy from the College of William and Mary.  He holds a Master’s in National Security Studies from the National War College.

Mr. Renz is married and has one son working in the United States.