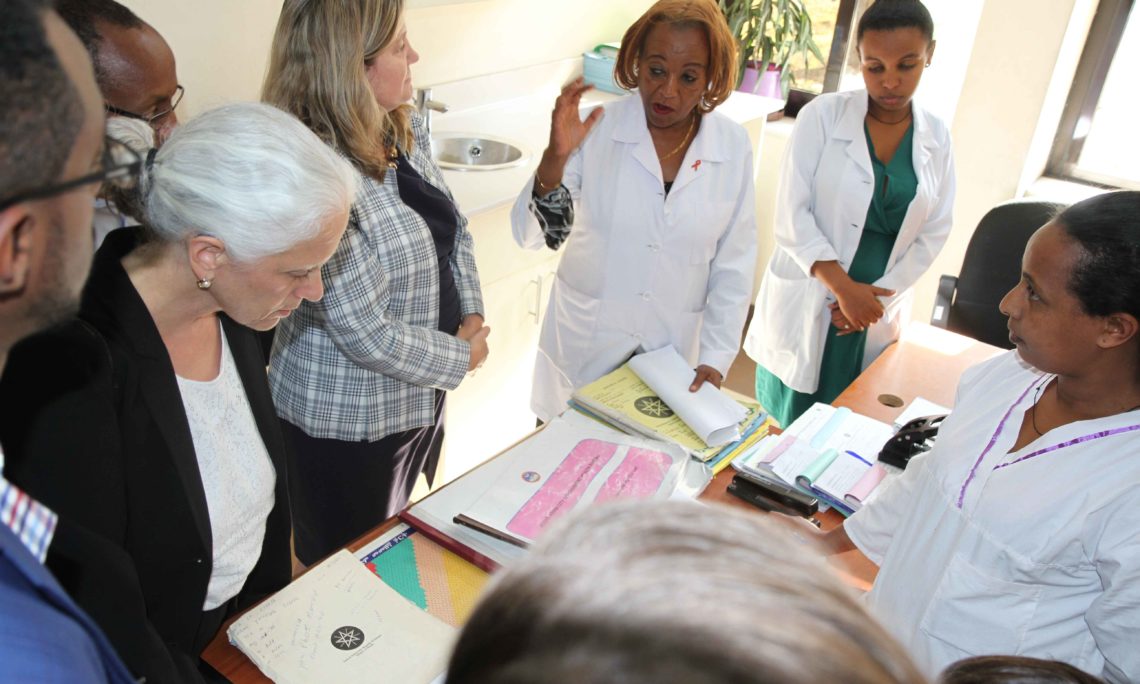 Office of Global AIDS Coordinator (S/GAC) Chair for Ethiopia, Dr. Heather Watts recently led a delegation to review PEPFAR programs in Ethiopia as the country nears a historic moment of the HIV/AIDS response, with the country positioned to reach sustained epidemic control by 2020.

The delegation met with Ethiopian government officials, including State Minister of Health Seharela Abdulahi to discuss ways PEPFAR can support Ethiopia’s efforts to build on the policies and achievements made so far.

During the trip, the delegation visited the HIV/AIDS services at the Zewditu hospital, Addis Ababa, where the first ART program was launched with PEPFAR’s support in 2003. Representatives from the Addis Ababa HIV/AIDS Prevention and Control Office and Zewditu hospital presented their performance reports and discussed methods for making further progress toward the 90-90-90 targets. (By 2020, 90% of people who are HIV infected will be diagnosed, 90% of people who are diagnosed will be on antiretroviral treatment and 90% of those who receive antiretrovirals will be virally suppressed.)

In Ethiopia, PEPFAR supports the provision of lifesaving antiretroviral treatment (ART) for 453,955 people including 21,823 children, which accounts for 98% of the treatment being offered nationally. From October 2017 through June 2018 alone, PEPFAR provided HIV testing and counseling services for nearly 4.3 million men and women including more than 1 million pregnant women, and have identified more than 40,000 new cases. The program also ensured that over 290,000 orphans and vulnerable children as well as their caregivers received critical care and support services.

This year marks the 15th anniversary of PEPFAR. Working together with partner countries, PEPFAR has saved over 14 million lives and transformed the global HIV/AIDS response. Since the start of PEPFAR in 2003, bipartisan U.S. government commitment has invested more than $2.8 billion in Ethiopia alone to the HIV/AIDS response.