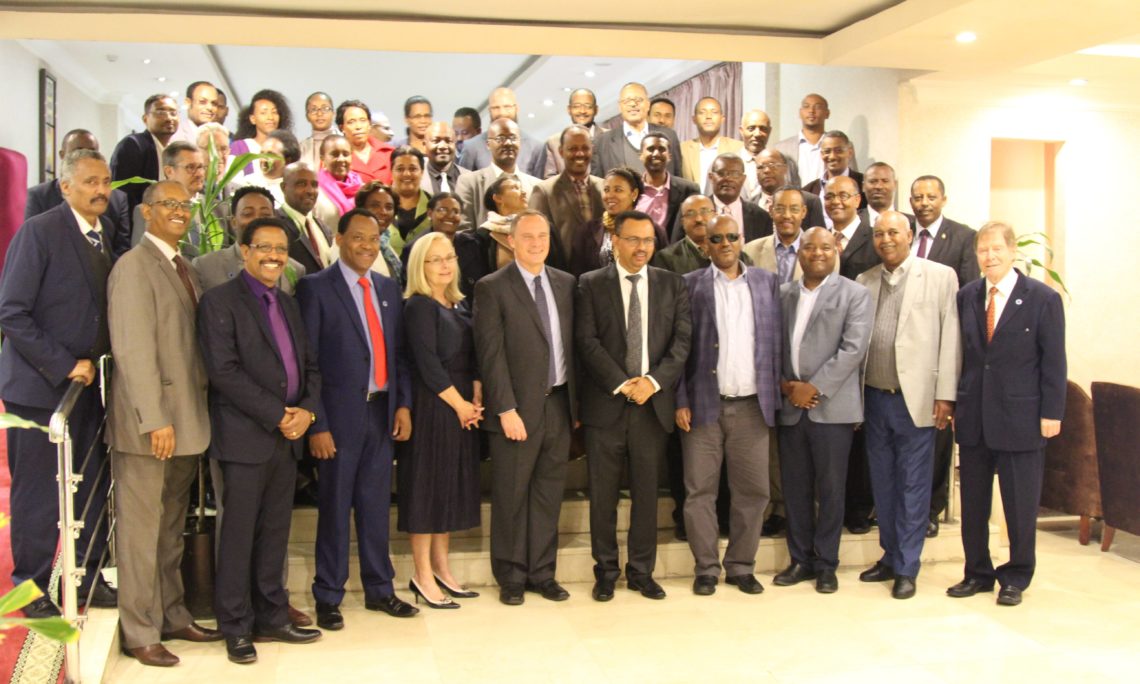 The Honorable Asmelash Woldesilasie, Chief Government Whip for the House of People’s Representatives

Thank you for the true honor of being able to address you today.

I’d like to start, if I may, by extending sincerest condolences, in my own name, on behalf of the fourteen hundred American and Ethiopian employees of the U.S. Embassy in Ethiopia, and on behalf of the United States Government and the American people, for the lives lost in the attack at Meskel Square one week ago.

I also wish to express our concern for those who were injured, and our best wishes to the families and loved ones of all those who were impacted by this terrible attack.

We wish the injured a quick and full recovery.

I’d also like to commend the resilience and positive spirit I’ve seen from the Ethiopian people, and the messages of hope, solidarity, and commitment to reform that have been expressed in response to the tragedy.

I’m truly honored, and very happy, to join you today to launch this important workshop on the leadership role parliamentarians can play in good governance.

I want to thank everyone who helped make this opportunity a reality, especially Pastor Dan and his fantastic team.

I’m proud that the United States was able to provide support through Justice for All for this fantastic event: the first time we’ve ever supported this type of workshop for the House of People’s Representatives in Ethiopia.

But equally important, I wish to acknowledge with gratitude and respect that the leaders of this workshop, from the Pointman Leadership Institute, are generously volunteering their time and expertise in being here today.

Volunteerism is something that Americans see as integral to our own society, and we’re grateful for their display of generosity today.

Your workshop leaders are from various places –  Switzerland, South Africa, Tanzania, and the United Kingdom – because while the core principles of good governance are universal, there is value in understanding different approaches to implementing them.

They have delivered this workshop all around the world, but this workshop has been specifically tailored to you, the members of parliament in Ethiopia.

Good governance is a term that gets used a lot, but it’s worth taking a moment to consider what it means.

I’d like to do that in the context of our experience in the United States.

The concept of good governance is closely linked to the basic tenets of our democracy, which was so well described by President Abraham Lincoln as “government of the people, by the people, for the people.”

And it’s that last part that gets to the heart of today’s workshop:  the idea that government exists to work for the people, to represent their concerns and needs.

I know this isn’t a new idea to you, or for that matter, to any of us.

It’s an idea espoused by, among others, one of the United States’ founding fathers and our third President, Thomas Jefferson, who reminded the U.S. Congress more than 200 years ago: “The care of human life and happiness, and not their destruction, is the first and only object of good government.”

Ethiopia has committed itself to reform, to widening political space, to pursuing new avenues to economic prosperity, and to including all of its citizens in the process of charting this extraordinary country’s future.

It’s a decision in which you all played a fundamental role, when you confirmed Prime Minister Abiy to lead your party and your government.

And that was just the very first step of the process.

In the United States, we believe that democracy offers the best path to peace and prosperity, but those benefits aren’t guaranteed by just holding free and fair elections.

Elections give the people a voice in choosing who will represent them, but the real work starts after that, when elected representatives assume the responsibility of demonstrating to their constituents that they will deliver on the people’s expectations.

This is where good governance comes into play.

It means always considering the impact of legislation and policy on people’s lives.

It means listening to what people are saying, and working to understand and address their needs.

Sometimes it means taking time to explain and build support for new policies that might be beneficial but poorly understood among the people.

It requires governments to work within the fundamental principle  that they are accountable to the people, and that the path to re-election is good governance.

We also believe it is important that the branches of government are able to work independently.

Independent institutions strengthen accountability and the rule of law, which are critical elements to a successful democratic society.

It’s through these practices that the United States has grown strong and successful over the years.

But these practices also require constant commitment, and conscious implementation.

By respecting the fundamental premise that power ultimately rests with the people, and that elected officials are accountable to the people, the United States has worked to overcome our challenges, correct our mistakes, and move closer to the future we wish to build for ourselves.

Prime Minister Abiy has laid out an impressive range of reforms and policies to build a more inclusive, more democratic, and more prosperous Ethiopia.

I’m inspired by these goals and by the strong support for them that I see among the Ethiopian people.

You each played a key role in reaching this point, and you will each play a key role going forward.

Today’s workshop is intended to suggest to you some skills, and to provide to you some points of discussion, about how you can draw on your own leadership and good governance backgrounds to make the most of this opportunity.

The reform process will be led by Ethiopians for Ethiopians, and you are the embodiment of that process.

As Ethiopia continues on this historic path, I reiterate to you my firm commitment that the United States is ready to partner with you and all others who share the goal of building a bright future for this country.

Today’s program is part of an ongoing partnership between the United States and Justice for All-Prison Fellowship Ethiopia.

Since 2007 we have supported a range of activities to promote human rights, improve the justice system, and advance good governance.

These programs have provided human rights training for hundreds of judges, public prosecutors, and police officers from around the country; and have supported their work with the Federal Supreme Court to develop sentencing guidelines.

And we’re currently working with the Attorney General’s Office on amendments to the Ethiopian Commercial Code.

We see today’s workshop as another step forward in this cooperation, and I hope it will be the first of many more opportunities to come.

I’ve acknowledged our partners, but most of all I wish to acknowledge each of you for devoting your time to this important workshop.

I wish you a very productive workshop, and will welcome hearing from you in the days ahead about how we might be able to contribute further to the important work you do.