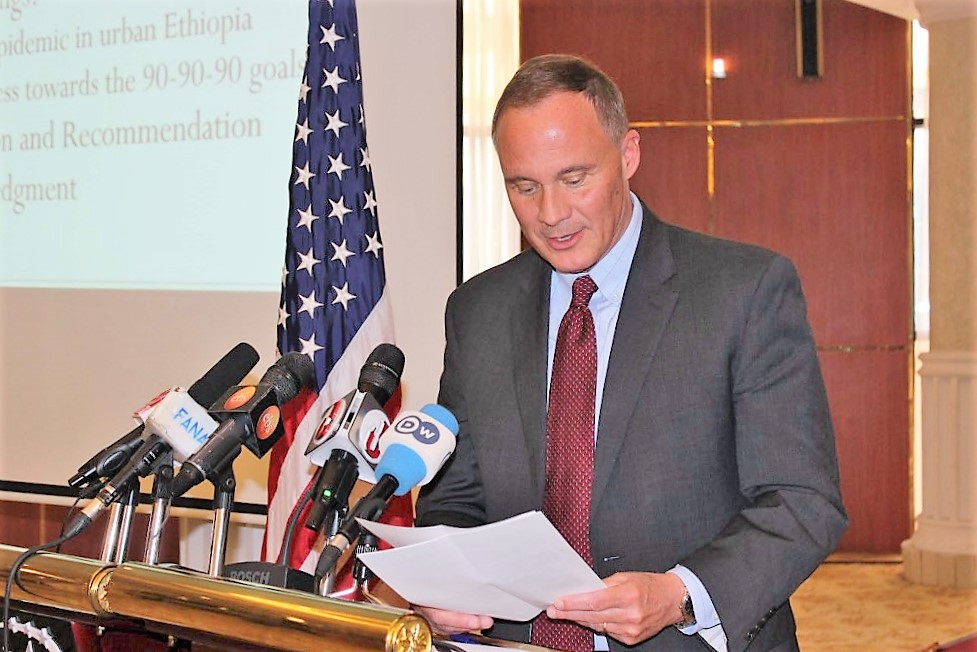 On World AIDS Day, the Ethiopian Public Health Institute (EPHI) the U.S. President’s Emergency Plan for AIDS Relief (PEPFAR), the U.S. Centers for Disease Control and Prevention (CDC), and ICAP at Columbia University (ICAP) released new survey data demonstrating Ethiopia’s progress in confronting its HIV epidemic, as well as challenges still to be addressed.
The Ethiopia Population-based HIV Impact Assessment (EPHIA) was conducted between October 2017 and April 2018. As previous studies showed very low HIV prevalence in rural areas, the study focused on urban populations in Ethiopia.
The EPHIA results demonstrated significant progress toward achieving epidemic control in Ethiopia. Notably, it found that 70% of HIV-positive adults in urban Ethiopia are virally suppressed. This encouraging result is close to the Joint United Nations Program on HIV/AIDS (UNAIDS) target of achieving viral suppression of 73% by 2020.
The study showed significant progress in ART coverage: among HIV-positive adults ages 15-64 years in urban Ethiopia who knew their status, 99% reported current use of ART. Still there is much work to be done to ensure that all persons living with HIV know their status and are initiated on treatment, with disparities remaining across regions, age and sex groups.
“EPHIA was a critical undertaking that has demonstrated successes and remaining challenges of the Government of Ethiopia in testing and treating people impacted by HIV,” said Dr. Ebba Abate, Ethiopia Public Health Institute (EPHI) General Director. “The government is committed to increasing its efforts to expand access to HIV testing and link people living with HIV to care.”
Ethiopia is among only a few countries in Africa that are within reach of meeting the UNAIDS treatment goals by 2020, namely: having 90 percent of those infected know their status; having 90 percent of those diagnosed receive treatment; and having 90 percent of those receiving treatment achieve viral suppression.
At the event, U.S. Ambassador to Ethiopia Michael Raynor praised the commitment of the Ethiopian government, health workers, and communities in partnering to combat the spread of HIV, highlighting the importance of their efforts for ensuring that U.S. investments in combatting HIV succeed. “I said that we’ve invested over $3 billion toward these outcomes, and that’s true, but the results are literally priceless.”
He said Ethiopia’s efforts and commitment of resources are recognized by PEPFAR as a model for how other countries can sustainably and successfully fight the HIV epidemic, adding, “I strongly encourage the government to build on this model and to prioritize adequate financing of the health sector, especially for its invaluable human resources.”
“The partnership between the United States Government and Ethiopia has resulted in remarkable progress in the fight against HIV,” said CDC Country Director Christine Ross, M.D. “While we celebrate this achievement, we must continue to diligently work together to address the gaps that remain.”
“EPHIA results show thousands of Ethiopians in urban areas are receiving the treatment they need to keep the HIV virus in check and live healthy lives,” said Dr. Zenebe Melaku, ICAP at Columbia University’s country director in Ethiopia. “We are encouraged by this progress and the efforts Ethiopia is making to identify and treat all people infected with HIV.”
The EPHIA Project is funded by the U.S. government through PEPFAR and conducted by the Ministries of Health, CDC, ICAP, and other governmental and non-governmental partners.

The U.S. President’s Emergency Plan for AIDS Relief PEPFAR is the United States government’s response to the global HIV/AIDS epidemic, which represents the largest commitment by any nation to address a single disease in history. Through the compassion and generosity of the American people, PEPFAR has saved and improved millions of lives, accelerating progress toward controlling and ultimately ending the AIDS epidemic as a public health threat. For more information, please visit www.pepfar.gov, and connect with PEPFAR on Twitter, Facebook, and Instagram.
The U.S. Centers for Disease Control and Prevention CDC works 24/7 saving lives and protecting people from health threats to have a more secure nation. HIV and tuberculosis (TB) are the world’s two most deadly infectious diseases, and CDC’s Division of Global HIV & TB works with partners to tackle these two epidemics and produce the greatest global health impact. More information can be found at http://www.cdc.gov/globalhivtb.
ICAP at Columbia University ICAP was founded in 2003 at Columbia University’s Mailman School of Public Health. A global leader in HIV, tuberculosis, other health threats, and health systems strengthening, ICAP provides technical assistance and implementation support to governments and non-governmental organizations. More than 2.2 million people have received HIV care through ICAP-supported programs, and over 1.3 million have received antiretroviral therapy through such support.