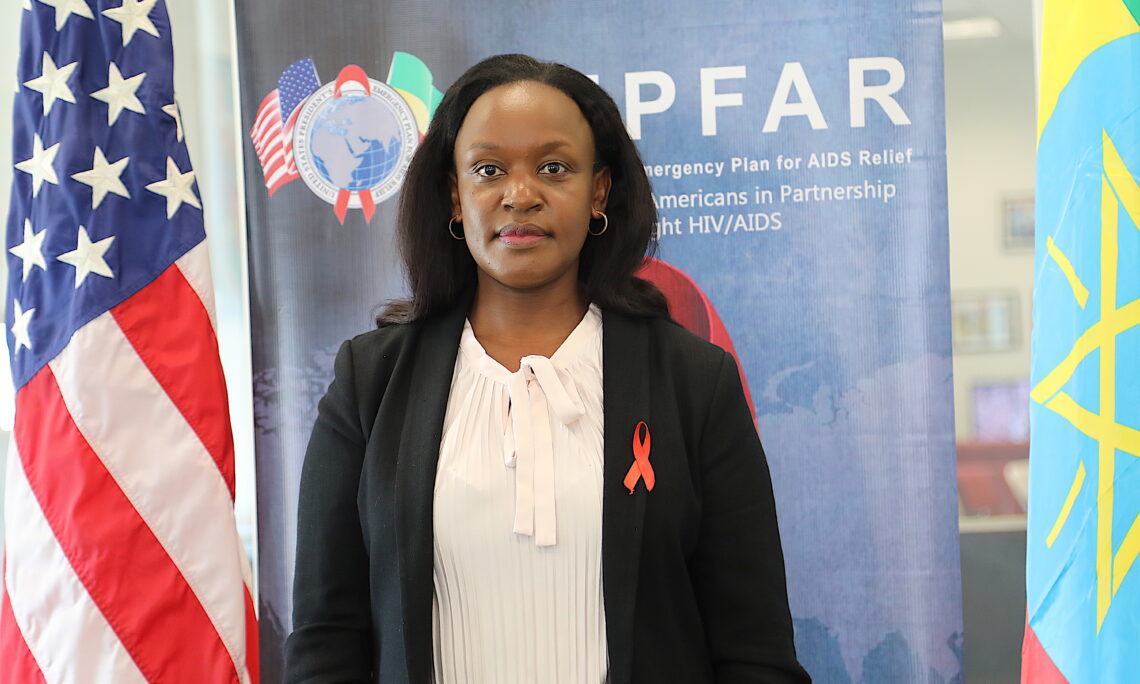 Interview with Voice of America, December 23, 2022

VOA/Meleskachew Amha– Dr. Aimee Rurangwa I must thank you very much for giving this time.  My first question is that the President’s Emergency Plan for AIDS rehabilitation [sic] was launched almost 20 years ago. How do you describe the program’s performance in Ethiopia during these years?

PEPFAR/ Dr. Aimee Rurangwa – Thank you for the question. You are right.  PEPFAR started in Ethiopia in 2004, so almost two decades, and the performance has been just…what can I say…just stellar. When PEPFAR started in 2004, the HIV prevalence was around 7%.  Two decades later, we are at less than 1%, which is tremendous progress, and this is thanks to the leadership of the Ministry of Health.  We work together closely with the Ministry of Health, with U.S. government agencies, and other donors to devise a response that is appropriate to the context here in Ethiopia.

VOA/Meleskachew Amha – Do you see any unique achievements of PEPFAR in Ethiopia?

PEPFAR/ Dr. Aimee Rurangwa – Absolutely.  The contribution of PEPFAR here in Ethiopia has been mostly through health system strengthening, working closely with the Ministry to set policy, systems, and just an enabling environment for the implementation of prevention services, care and treatment services, and other HIV response pieces.

VOA/Meleskachew Amha – What do you think will be or is the most enduring change that this pandemic brought about in the health service system particularly in this country?

PEPFAR/ Dr. Aimee Rurangwa- Yes, as I said, PEPFAR has been working with the government to set the systems, and that really helped with the sustainability piece.  With strong health system infrastructure, with laboratory systems to do the diagnosis, and with the health workforce that has been trained and is savvy and ready to respond, we are really confident that the gains will last, even outlast, PEPFAR with the leadership of the Ministry of Health.

VOA/Meleskachew Amha – The other thing is how do you evaluate the impacts of Covid-19 vis-a-vis your work regarding this HIV/AIDS?  How did it impact your role?

PEPFAR/ Dr. Aimee Rurangwa – Unfortunately, Covid-19 has impacted the world, not just Ethiopia, so all our work has been also impacted– first and foremost, through the supply chain that has been impacted; the delivery of antiretroviral drugs and testing kits have been impacted… a little bit delayed– because of Covid-19. Most of our patients also couldn’t access services at some point due to the lock down, but with PEPFAR and the systems that were already set, we were able to put in place mitigation measures and just continue with the services.

VOA/Meleskachew Amha – What is the current situation of HIV/AIDS like in this country? Because you know in some places, we hear that still the prevalence rate is high in some towns and especially in gambella and the like. What is your assessment here?

PEPFAR/ Dr. Aimee Rurangwa – So in Ethiopia, it’s true, the prevalence is low countrywide, however, some regions are more impacted than the others.  HIV is focused mostly in the urban areas, and some places like Gambella that you mentioned and Addis Ababa and Oromia, Tigray– those are some of our high-prevalence areas.

VOA/Meleskachew Amha – So what are the reasons behind all these specific areas?

PEPFAR/ Dr. Aimee Rurangwa – I believe, and this is through our work, we have been noticing that some regions are more economically attractive, and that attracts most people, and there are also key populations, who live in those areas– just going for economic opportunities– and that, I think, drives the epidemic.

VOA/Meleskachew Amha – Are you convinced that Ethiopia has made the most out of PEPFAR’S program here?

PEPFAR/ Dr. Aimee Rurangwa – Absolutely. We are really happy with the working relationship that we have with the government. The government takes leadership; they take ownership of the program, and through the generosity of the American people, we have invested close to 3 billion U.S. dollars into the HIV response, and that has been used effectively and efficiently to provide services where they are most needed.  That said, there are still inequalities– some populations are being more affected than others, and in the future, that’s what we need to focus on as PEPFAR.

VOA/Meleskachew Amha – Can you quote some figures, like what is almost the total investment of PEPFAR in Ethiopia during the last two decades?

VOA/Meleskachew Amha  – And what activities, what specific activities did absorb this amount of money?

PEPFAR/ Dr. Aimee Rurangwa – Yes, thanks for that question. With the 3 billion [figure corrected for accuracy] dollars, and thanks to the American people, who have consistently provided that funding year after year, we have been able to afford antiretroviral treatment for over 450,000 men and women and children.  They have benefited from HIV diagnosis, treatment, and they have been able to achieve viral suppression, which is the key performance indicator for our program, so people are living healthier and longer lives. Back in the day, we remember, an HIV diagnosis was almost announcing to you that you were going to die in the next five or maybe 10 years. Who knows?  However, today, people take the diagnosis as another diagnosis because they know they will have the treatment they need, and that has been able to keep men and women living healthy, active lives, to contribute to the economy, to contribute to society.  Babies are being born HIV-free to mothers that have HIV thanks to those investments that PEPFAR has put in Ethiopia.

VOA/Meleskachew Amha – Yes, I think as I said, the government of Ethiopia has been really on the forefront and contributing to this fight. However, there is still room for improvement.  The inequalities in terms of accessing services are really impacting the response, so one such lost opportunity could be focusing on the children.  Because we are noticing now that the children are lagging behind.  More adults are taking treatment.  They are living healthy lives, but the mortality of children, who are HIV positive, are still quite high, and those are some of the lessons that we are learning we think should be the focus.

VOA/Meleskachew Amha – Last question…probably.  What specific plans does PEPFAR have in the next few years in Ethiopia?

PEPFAR/ Dr. Aimee Rurangwa- Thank you for that question– a timely question because we have just released a five-year strategic plan and the plan has five pillars.  It focuses on equality, providing equitable, quality care. It also focuses on sustaining the response.  In addition to that, it focuses on health system strengthening and health security.   All that focusing on science, data, and community leadership, so looking into the future, we will work toward improving sustainability, equitable services, and putting the community at the forefront– in the driver’s seat to help move that response forward.

PEPFAR/ Dr. Aimee Rurangwa – I believe it has tremendously.

VOA/Meleskachew Amha – What examples can you give me?

PEPFAR/ Dr. Aimee Rurangwa– Throughout the 20 years of PEPFAR in Ethiopia, healthcare providers have received training. This is a knowledge that they will keep forever.  They have been sensitized to the awareness that HIV is still a threat. It is a pandemic, and it isn’t going anywhere.  Since we don’t have a cure yet, more programs are still needed to change the behavior or even to reach people who are hard to reach.  There are regions that we can’t really reach because of stigma and discrimination.  People are still afraid to be labeled as “HIV positive,” so some of them are still afraid to go to seek care, so a lot is to be done in that sense, and I think that is why we are committed to helping the government with that.

VOA/Meleskachew Amha – How about the stigmatization? Do you think that it has really decreased the popular perception of the disease?

Dr. Aimee Rurangwa – Absolutely, especially among the healthcare providers.  At the beginning of the pandemic or the epidemic, people considered that they were going to die if they had the HIV diagnosis.  Even health care providers were discriminating against people living with HIV, but now more and more people are knowledgeable. They know the mode of transmission; they know that they cannot acquire HIV just by touching the patient, who has HIV positive, so this stigma among health care providers has reduced tremendously.

VOA/Meleskachew Amha – Are people more at ease to go to check their status now?

Dr. Aimee Rurangwa – They are, and that’s because there are treatments that are available.  Now that people are not afraid to know their diagnosis because they know they can still live a healthy life despite the diagnosis, they are more and more going to seek the care and learn about their HIV status and be put on treatment.

VOA/Meleskachew Amha – Do you have any specific message to Ethiopia and the Ethiopian people as a coordinator of this program?

Dr. Aimee Rurangwa – Yes I do. I actually have a message to the Ethiopian people and to all the people who are listening to us.  My message, and what I’m going to leave you with, is that we must remember that although Ethiopia has made significant progress combating HIV, the gains can be easily reversed without focused, sustained, and equitable access to HIV services. Through PEPFAR, the American people remain committed to leveraging our investment effectively to make measurable and sustainable gains in Ethiopia’s public health system and to prevent and control HIV/AIDS.

VOA/Meleskachew Amha – Thank you, Dr. Aimee for your cooperation and giving me this precious time.

Dr. Aimee Rurangwa  – Thank you. It is a pleasure speaking with you.

Listen to the interview.