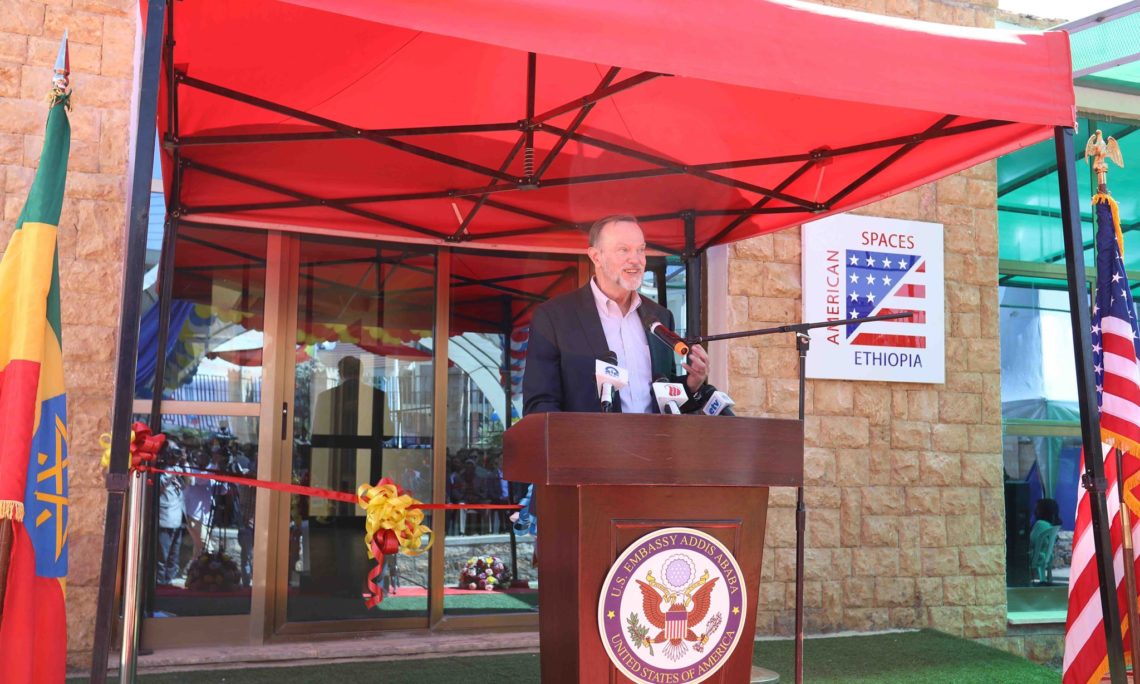 Addis Ababa, Ethiopia, January 27, 2020 – U.S. Assistant Secretary for African Affairs Tibor Nagy has concluded a successful visit to Ethiopia which involved the inauguration of the Mekelle American Corner (MAC), a modern space for learning, discovery and collaboration aimed at developing and empowering Ethiopian youth and emerging leaders.  MAC is located at the newly opened Science Museum Building, Adi Haki Campus and houses a digital library with a collection of journals, American publications and thousands of books, a bank of computing devices from iPads to laptops, and a makerspace equipped with the latest science and technology kits that promote hands-on creativity and innovation.

In his remarks at the MAC opening event, Assistant Secretary Tibor Nagy said, “This American Corner will be a place for the free exchange of ideas, where all can discover new talents and develop them, and where connections with the United States and the rest of the world are as close as a click on a computer screen.”

The U.S. Embassy invested over 2,170,000 Birr in the MAC, the sixth space of its kind in Ethiopia with five others in Bahir Dar, Dire Dawa, Jimma and two in Addis Ababa at the U.S. Embassy and the Ethiopian National Archives and Library Agency (NALA). The MAC symbolizes the deepening U.S.-Ethiopian relationship and the U.S. commitment to investing in the capacity of Ethiopian people through education and training.  The MAC will be open to the public Mondays to Fridays from 8:00 a.m. to 7:00 p.m. and Saturdays 8:00 a.m. to 5:00 p.m.

Assistant Secretary Nagy also met with U.S. exchange alumni and American Ambassador’s Distinguished Scholars in Mekelle to discuss how these programs have shaped their interests and work in Ethiopia.  Alumni participants included those who participated in the Young African Leaders Initiative, the International Visitor Leadership Program, the Community Solutions Program, and the Study of the U.S. Institutes program.  During the meeting, Assistant Secretary Nagy expressed the United States’ support of these alumni and the Ethiopian government’s ongoing efforts to capitalize on the potential of its people, particularly its youth.

In addition, Assistant Secretary Nagy met with key university partners and officials from the Ministry of Science and Higher Education (MoSHE).  During the meeting, Assistant Secretary Nagy and the officials discussed challenges facing Ethiopian higher education institutions and opportunities for increased university partnerships and research collaboration between the United States and Ethiopia.  The Assistant Secretary expressed his appreciation for the long history of partnership with Ethiopia on education, a relationship going back nearly 70 years. He also discussed the University Partnerships Initiative, a program that aims to expand partnerships between U.S. and African universities to strengthen Africa’s educational institutions and enhance their role as instruments of national development.