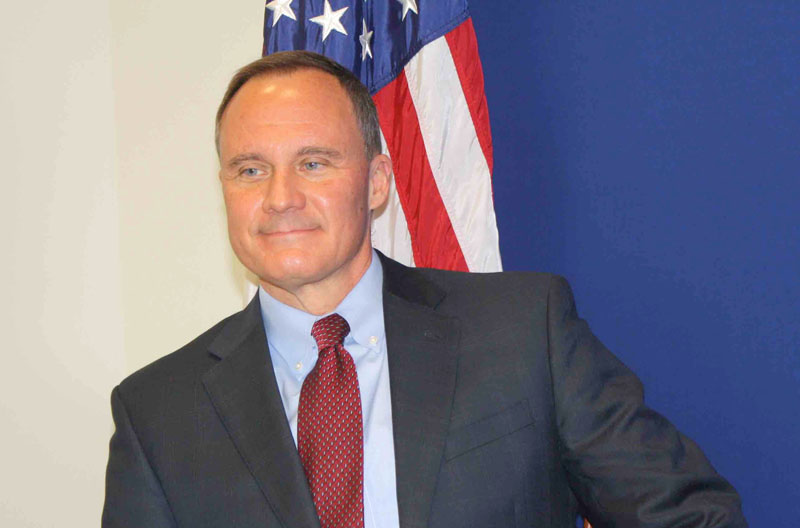 The story of the United States’ leadership in the global battle against COVID-19 is a story of days, months, and decades. Every day, new U.S. technical and material assistance arrives in hospitals and laboratories around the world. These efforts, in turn, build on a decades-long foundation of American planning, expertise, and generosity.

The United States provides international assistance for altruistic reasons, and we do it debt- free, because we believe it’s the right thing to do. We also do it because no global challenges, including pandemics, respect national borders. If we can help counties contain outbreaks like COVID-19, we’ll save lives abroad and at home in the U.S.

And so the United States was one of the first countries to help the Chinese people as soon as reports emerged from Wuhan of an outbreak. In early January, the United States government offered immediate technical assistance to the Chinese Centers for Disease Control. Shortly thereafter, in the first week of February, the U.S. government, in partnership with Samaritan’s Purse, The Church of Jesus Christ of Latter Day Saints, and others, transported nearly 18 tons of medical supplies to Wuhan. We also pledged an initial $100 million to help countries fight what would become a pandemic – including an offer to China, which was declined.

Our response now far surpasses that initial pledge. Since the outbreak of COVID-19, the U.S. government has committed nearly $500 million in assistance.  This funding will improve public health education, protect healthcare facilities, and increase laboratory, disease-surveillance, and rapid-response capacity in more than sixty of the world’s most at-risk countries. Our support helps people in the direst of circumstances. For instance, the U.S. government works with NGOs to deliver medicines, medical supplies, and food to the Syrian people, including those living in regime-held areas, and we’re helping nongovernmental partners and the United Nations to build more water, sanitation, and health facilities across northern Syria to prevent the spread of the virus.  Here in Ethiopia, the U.S. government has already mobilized over $30 million since the COVID-19 outbreak began, to deliver life-saving medical supplies to the country’s health system and food to its most vulnerable people. And much more is on the way. America’s unsurpassed contributions are also felt through the many international organizations fighting COVID-19 on the front lines. The United States has been the largest funder of the World Health Organization since its founding in 1948. In 2019 alone, we gave more than $400 million to the institution – nearly double the second-largest contribution and more than the next three contributing countries combined. It’s a similar story with the U.N. Refugee Agency, which the United States backed with nearly $1.7 billion in 2019. That’s more than all other member states combined, and more than four times the second-largest contributor. Then there is the World Food Program, to which the United States contributed $3.4 billion last year, or 42 percent of its total budget. That’s nearly four times the second-largest contributor and, again, more than all other member states combined. We also gave more than $700 million to the United Nations Children’s Fund (UNICEF), more than any other donor. When these international organizations deliver food, medicines, and other support all around the world, the generosity of the American people, in partnership with other donor nations, is making a real difference in real lives.

Our country continues to be the single largest health and humanitarian partner for both long-term development and capacity-building efforts, as well as emergency response efforts in the face of recurrent crises. These resources save lives, protect people who are most vulnerable to disease, build health institutions, and promote the resilience and stability of communities and nations. The United States funds nearly 40 percent of the world’s global health assistance programs, adding up to $140 billion in investments in the past 20 years – five times more than the next largest donor. Since 2009, American taxpayers have generously funded more than $100 billion in health assistance and nearly $70 billion in humanitarian assistance globally.

And nowhere is the United States’ good will and positive impact more evident than in Ethiopia, where our investments constitute America’s largest development partnership in Africa. Over the last five years, we have invested more than $4 billion in multiple sectors, touching the lives of so many Ethiopians. Each year, American food donations help feed five million vulnerable Ethiopian citizens. We’ve invested over $150 million annually to improve the health and well-being of people across the country, whether by training medical professionals and strengthening health systems, procuring life-saving drugs and medical supplies, or ensuring that more than 20 million Ethiopians have affordable health insurance coverage. We have helped more than one million Ethiopian farmers grow higher-yielding, more resilient, and more nutritious foods and bring them to market, enabling them and their families to prosper more fully. In fact, U.S. government investments helped Ethiopian farmers and small business owners earn over 1.6 billion birr in 2019 alone. And last year, American companies invested millions of U.S. dollars in Ethiopia’s business sector, creating over 10,000 jobs.

Here in Ethiopia, as throughout the world, our partnerships are about much more than money and materials. They’re about U.S. experts working side-by-side with their Ethiopian counterparts. They’re about the doctors and public-health professionals we help train, and the millions of people they heal as a result. And they’re about strengthening the supply chains that help U.S. companies produce and distribute high-quality critical medical supplies in Ethiopia and around the world.

And it isn’t just the U.S. government that is undertaking these efforts. American businesses, NGOs, and faith-based organizations have already given at least $1.5 billion to fight the COVID- 19 pandemic internationally. American companies are innovating new technologies for vaccines, therapeutics, diagnostics, and ventilators. This generosity and expertise represent America at its finest.

As we have done time and time again, the United States will continue to support others during their time of greatest need. The COVID-19 pandemic is no different.  The U.S. has worked to make the world more healthy, peaceful, and prosperous for generations. We will work with our partners to defeat our shared pandemic enemy and to help the world rise stronger in its wake. And both during and after this crisis, we will remain steadfastly alongside our Ethiopian friends and partners to help build a brighter future for all Ethiopians.