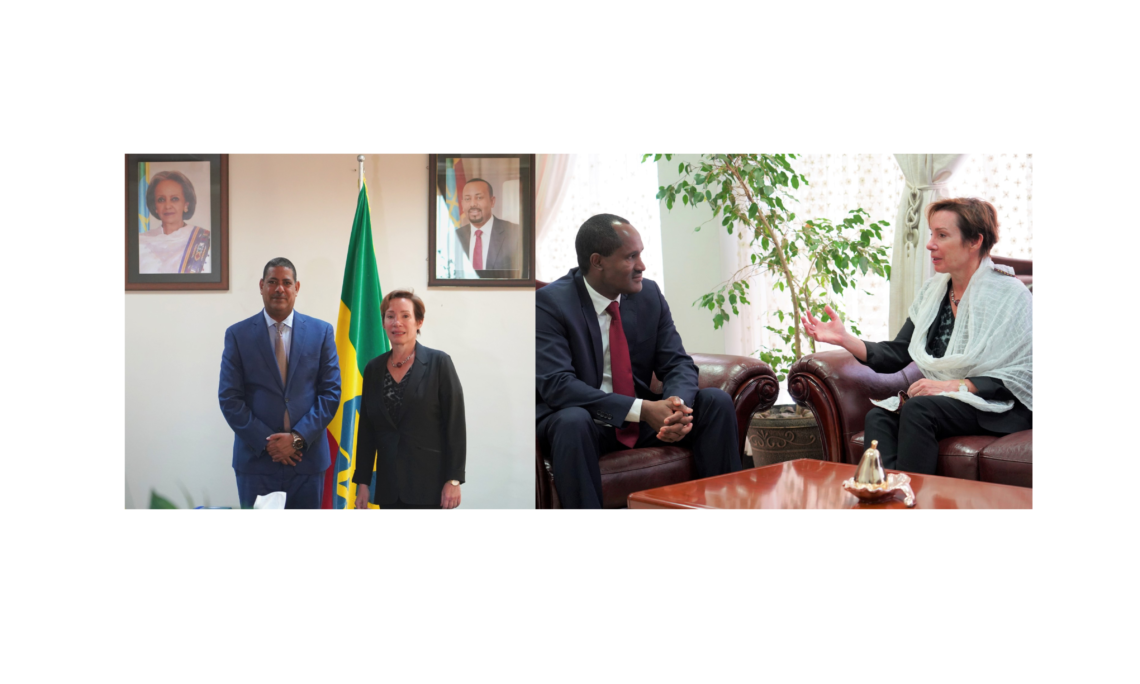 Addis Ababa, December 9, 2022 – Ambassador Tracey Jacobson, Chargé d’Affaires of the U. S. Embassy in Addis Ababa, traveled to Hawassa to meet with the regional presidents of both the Southern Nations, Nationalities and Peoples (SNNP) and the Sidama regions.  She met with SNNPR President H.E. Ristu Yirdaw and President of Sidama Region H.E. Desta Ledamo to better understand how the United States and their regions can work together.  She also explained the steps the Government of Ethiopia must take to regain AGOA eligibility, including permitting access by international human rights experts to conflict-affected areas of northern Ethiopia.  Ambassador Jacobson thanked both regional presidents for their generous hospitality as they welcomed her to Hawassa.

In commemoration of World AIDS Day 2022, the Ambassador visited a community health center providing services to people affected by HIV/AIDS.  The center is funded by PEPFAR, the President’s Emergency Plan for AIDS Relief, which coordinates the U.S. government’s efforts to end the global HIV/AIDS epidemic.  Ahead of its 20th anniversary in 2023, PEPFAR is committed to ending HIV/AIDS as a public health threat by 2030, globally and in Ethiopia.

On a tour of the Hawassa Industrial Park, the U.S. delegation spoke with Hawassa Park Investors Association CEO Hibret Lemma, Hawassa Industrial Park (HIP) General Manager Fitsum Ketema, and HIP investors.  Ambassador Jacobson also sat down with members of the Workers Wellness Alliance (WWA), a USAID program which helps new workers joining the HIP to integrate into the Hawassa community.  The alliance also helps local small businesses cater to this growing workforce, which has reduced the attrition rate of new employees.  The WWA also works to ensure the safety of the mostly female workers, including by providing community-led escorts to their homes after work at night.

The project, which is titled “Sustainable Wetlands for Sustainable Communities in Southern Ethiopia,” will collect data to quantify the carbon emissions caused by conversion of wetlands into croplands.  It will then develop strategies to promote sustainable agriculture and wetlands management and advocate for management policies that respond both to communities’ need for food security and the global need to preserve carbon sinks and biodiversity. This project is funded through a grant from the U.S. Department of State’s Bureau of Oceans and International Scientific Affairs Climate Grant Program.