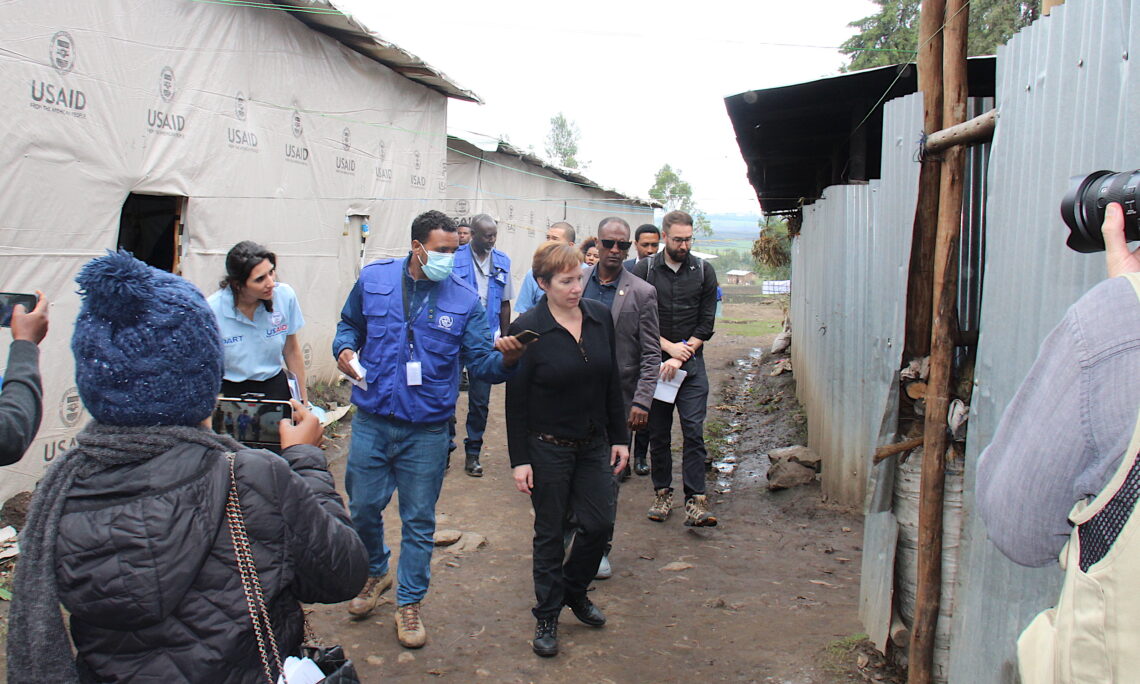 Addis Ababa, July 21, 2022 – Ambassador Tracey Jacobson, Chargé d’Affaires of the U.S. Embassy in Addis Ababa, visited Gondar, Amhara July 19-20.  During her trip, she met with the Mayor of Gondar and the Central Gondar Zone Deputy Administrator and emphasized the United States’ ongoing support for the humanitarian and development needs of all Ethiopians, including those displaced by conflict in Amhara.

At the start of her trip, Ambassador Jacobson visited Mayor of Gondar Zewdu Malede and Central Gondar Zone Deputy Administrator Eyerus Mengistu.  They discussed urgent needs facing the community, U.S. assistance to those displaced by conflict, and continued U.S. support for peace and stability in the region.

She joined USAID’s Northern Ethiopia Disaster Assistance Response Team (DART) on a visit to Dabat Internally Displaced Persons (IDP) Camp in North Gondar Zone, run by the International Organization for Migration (IOM).  Speaking with IDP leaders, camp medical providers, and women affected by the conflict, Ambassador Jacobson witnessed firsthand the effects of conflict on displaced families and the vital impact of U.S. support to save lives and alleviate suffering.  Across the regions affected by the northern conflict, the United States is reaching over 9.4 million people with humanitarian aid, including food assistance and emergency shelter.

The Chargé also met with community members and stakeholders, including academics, local political leaders, interfaith religious leaders, women, and youth to hear their concerns on a wide range of issues in Amhara.  These conversations helped inform proactive steps the United States can support to move the region and the country towards unity.  These conversations included efforts to promote peace and stability; how to move forward after recent and continuing regional conflict; future opportunities for cross-cultural engagement between the United States and Ethiopia; and local business-building opportunities.

Ambassador Jacobson visited the Comprehensive Outpatient Center (COC) at Gondar teaching hospital, which is supported by the U.S. Centers for Disease Control (CDC) in partnership with the Ministry of Health and the regional health authority.  This state-of-the-art facility provides an integrated program that enhances a patient-centered experience, making a difference by providing all-inclusive HIV/AIDS and integrated maternal and child health services to communities in Amhara.  The U.S. government, through PEPFAR/CDC invested $9.1 million for the construction of this facility inaugurated in 2016.

She and the Gondar University President Dr. Asrat Atsedeweyn talked about upcoming professional exchanges of academic leaders and professors between Gondar University and American universities.  She also met with two leading women of Gondar including the Founder of a breast cancer foundation and a successful businesswoman-leader in the hospitality and industrial sector.  They discussed efforts to detect and treat breast cancer in Ethiopia, and opportunities for Ethiopian businesswomen in Gondar.

The United States remains committed to working in partnership with the government, community organizations, and people of Ethiopia to ensure a peaceful and prosperous future for all.  In 2021, the United States devoted nearly $1.3 billion for the health, welfare, and humanitarian needs of all Ethiopians.