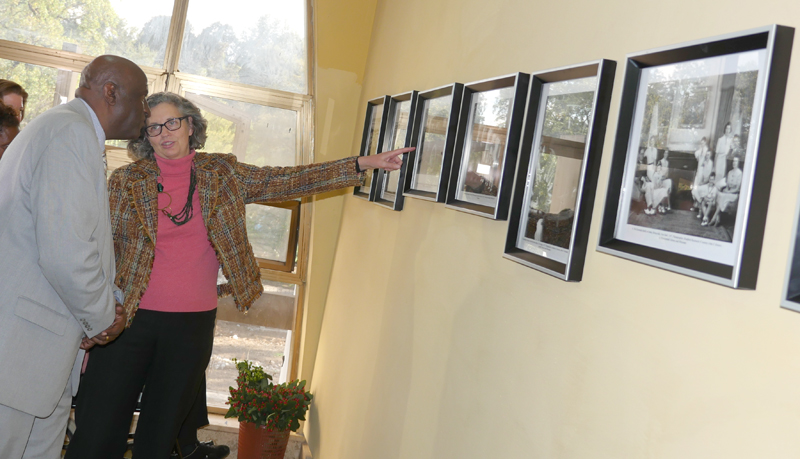 Addis Ababa, Ethiopia – In honor of the 50th Anniversary of President John F. Kennedy Memorial Library  at Addis Ababa University (AAU), The United States Embassy partnered with AAU to host an event opening a new photo exhibition commemorating President Kennedy’s life and work.  The exhibition will be on view at the University from May 15, 2017 through June 30, 2017 as part of the JFK 100 Centennial Celebration.  The anniversary celebration also features a youth conference on 16 May 2017 and a panel discussion with professional librarians on “the 21st century library services and skill sets” on 17 May 2017.  Both events honor President Kennedy’s legacy of encouraging youth participation in public service and expanding access to education.

Acting Deputy Chief of Mission (DCM), Lucy Abbot remarked at the opening of the exhibition, “This library is a symbol of the ongoing partnership between the United States of America, which reaches far beyond the level of our governments, extending to business, educational institutions, and in direct relations between our people.”

Kennedy’s administration coincided with a golden age of photojournalism in America. No single politician was photographed more than Kennedy—from his first congressional bid as a decorated war hero in 1946, his fairytale marriage to Jacqueline Bouvier in 1953, his run for the White House in 1960 and role as commander in chief, to the tragedy of his death in Dallas in 1963.

“John F. Kennedy is still seen as a symbol around the world, representing and espousing the best and most universal elements of the American character,” said Stephen Kennedy Smith, Kennedy’s nephew and co-editor of JFK: A Vision for America.

As part of the “JFK 100 Centennial Celebration,” the Kennedy Presidential Library and Museum is spearheading a series of events and initiatives across the nation aimed at inspiring new generations to find meaning in the enduring values that formed the heart of the Kennedy presidency— courage, freedom, justice, service and vision. In Washington, the exhibition is part of a citywide celebration with other cultural organizations including the John F. Kennedy Center for the Performing Arts, the Smithsonian’s National Portrait Gallery and the Smithsonian’s National Museum of American History, the White House Historical Association and the Newseum.

Visitors can join the conversation about the centennial celebrations at #JFK100.