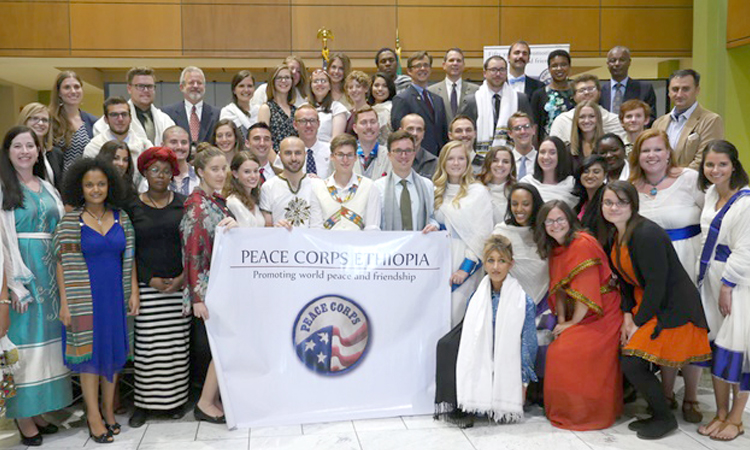 Addis Ababa, Ethiopia, September 16, 2016: 44 new Peace Corps Volunteers at the U.S. Embassy in Addis Ababa were sworn in by Chargé d’affaires Peter Vrooman today.  These Volunteers will be working as English language teachers in rural towns throughout Ethiopia. This group is the fifteenth group to swear in as Peace Corps Volunteers since 2007. They will join over 200 currently serving volunteers in Ethiopia and over 7,000 currently serving volunteers around the world. The G15 PCVs will be living and serving in Oromia, Tigray, Amhara, and SNNPR.

Peace Corps Ethiopia’s Education program began in 2011 with the first Volunteers working as teacher trainers in primary schools and teacher’s colleges.  After refinements based on feedback from the Ministry of Education and schools, Volunteers now work as direct English teachers in local high schools around the country. The refocused education project is titled Promoting English Language Learning in Ethiopia (PELLE). Since 2014, Volunteers are placed in high schools as direct English teachers, with a maximum of three sections of their own.  Additionally, Volunteers plan and lead extracurricular activities including student and teacher English clubs, gender-empowerment clubs, and teacher trainings.

About Peace Corps Ethiopia: While first established in 1962, Peace Corps returned to Ethiopia in 2007. Today the post is among the largest in the world, with over 200 Volunteers working in the three sectors of Health, Agriculture and Education. During their service in Ethiopia, Volunteers learn to speak local languages, including Afan-Oromo, Amharic, and Tigrinya. More than 3,615 Peace Corps Volunteers have served in Ethiopia since the program was established in 1962. The 44 Volunteers of this 15th Group to Ethiopia will represent their fellow Americans in rural Kebeles across the four administrative regions of Tigray, Oromiya, Amhara and SNNPR.

About the Peace Corps: As the preeminent international service organization of the United States, the Peace Corps sends Americans abroad to tackle the most pressing needs of people around the world. Peace Corps volunteers work at the grassroots level with local governments, schools, communities, small businesses and entrepreneurs to develop sustainable solutions that address challenges in education, health, economic development, agriculture, environment and youth development