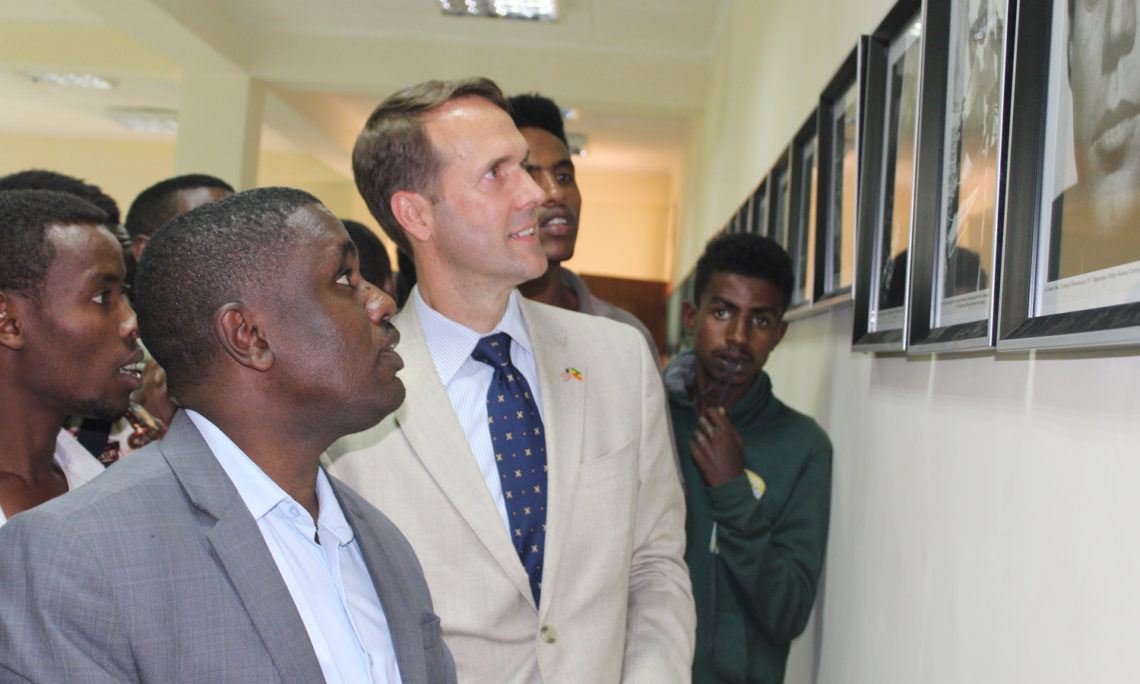 Hawassa College of Teacher Education is the fifth and final location that will host this exhibition before it is permanently installed at the John F. Kennedy Library at Addis Ababa University.

This is a fitting place to end our road show because as much as President Kennedy is remembered for his vision of putting a man on the moon, his legacy is perhaps strongest in the American Educational system.

President Kennedy understood the importance of supporting and empowering America’s youth to achieve a better future for our country, but he also understood that doing so requires much more than words.  During his time in office, he championed a number of pieces of legislation designed to expand access to education.

One of the most far reaching was only signed into law after his death. The Higher Education Facilities act became law in December 1963 and provided $1.2 billion over five years to support the construction of classrooms, laboratories, and libraries at private and public colleges and universities to expand the quality and availability of higher education in the United States.

Teachers, perhaps more than anyone, have the ability to shape a country’s future.  You spend more time with students during their waking hours than even their parents.  If you use that time well, you have a chance to not only impart the knowledge that they need to gain in your classroom, but to build a desire to learn more in the future.  You can also help shape who they become as people, and through that, what kind of society they will live in.

That’s an incredible responsibility and one that we support.  The United States supports efforts to improve education in Ethiopia at all levels.  In fact, this is an area where President Kennedy’s legacy is alive and well today.

You may not know that President Kennedy signed the legislation that created USAID, which today represents the largest bilateral contributor of humanitarian and development assistance.  A large portion of our development work here in Ethiopia focuses on education.

For example, USAID has collaborated with local communities to construct over 850 alternative basic education centers that have served more than 1.5 million children from disadvantaged and underserved groups.  Those centers have sine been converted to fully fledged primary schools.

And Hawassa College of Teacher Education is one of five teacher colleges nationally that is receiving support from USAID as part of it’s mother tongue language program, which has developed native tongue language curricula in seven languages and is on target to reach 15 million students.

That is the sort of help that we can and will continue to provide.  But these programs are geared toward helping you, Ethiopia’s next generation of teachers, help to lead the country forward from the classroom.

Each of you who has chosen teaching as a career has chosen to take a direct hand in Ethiopia’s future success.  President Kennedy saw the importance of education for America’s future.  I see the same potential here and congratulate you on taking up that incredible responsibility here in Ethiopia.