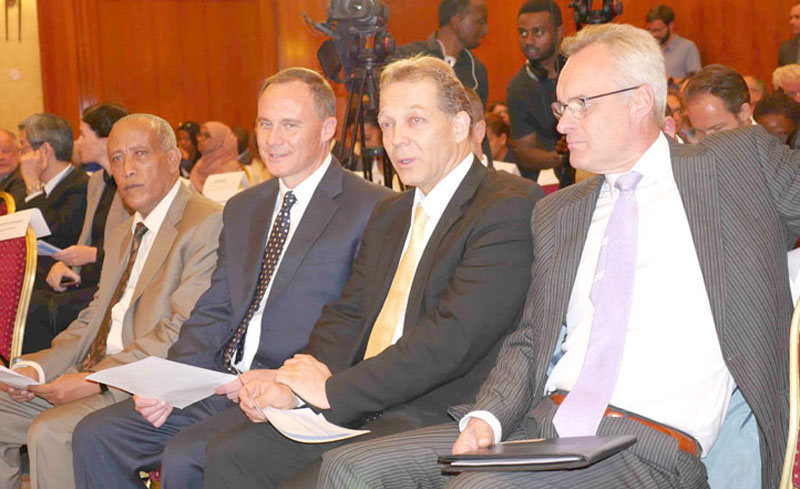 Your Excellency State Minister Solomon Tesfaye from the Office of the Prime Minister,

Head of Agencies and International Organizations, and

We are all here today because we share a strong commitment to supporting Ethiopia’s development, and because we feel strongly our collective obligation to assist and protect individuals fleeing conflict and persecution.

The formal launch of the Comprehensive Refugee Response Framework, or CRRF, is a significant milestone in pursuing both of these objectives, and I would like to congratulate in particular the Government of Ethiopia and UNHCR on this important occasion.

Today we set in motion important discussions and new forms of cooperation that will make our refugee response more effective and more beneficial — to refugees, to host communities, and to Ethiopia at large.

The United States is proud to represent the donor community on the CRRF Steering Committee for the initial period following this launch.

The Government of Ethiopia deserves enormous respect and gratitude for its decades-long generosity in hosting refugees from across the region, and it currently hosts the second largest refugee population in Africa.

Providing sanctuary to those in need is a great demonstration of Ethiopia’s leadership in the region, and sets a strong example for how all countries can contribute to the effort of supporting refugee populations.

At the same time, we can and must do more.

Even as donors step up our contributions, whether financial, technical, or political, Ethiopia is also preparing to do more as it implements the pledges made by Prime Minister Hailemariam at the Leaders Refugee Summit last September and applies the principles of the CRRF.

It is a global effort aimed at easing pressures on host countries and communities.

It seeks to increase refugee self-reliance, provide more options for resettlement and family reunification, and support conditions that allow for voluntary return, in safety and dignity, to countries of origin.

The CRRF aims to provide greater support to refugee-hosting countries through a whole-of-society approach to assisting refugees, working in partnership with the international community – humanitarian agencies, development partners, and the private sector – with particular attention given to helping refugees and their host communities thrive together.

I recently visited Nguenyyiel Refugee Camp in Gambella with the U.S. Ambassador to the United Nations, Nikki Haley.

I was struck by the terrific work being done there to support a large and rapid influx of refugees, and by the gratitude of the refugees I met for the refuge and support they have found in Ethiopia.

I was also struck, though, by how complicated the challenges are, and by the importance of a comprehensive and integrated approach to tackling those challenges.

Even the simplest things – like cooking food, for example – involve an incredible amount of coordination.

When we think of cooking, we think of stoves and fuel, but finding the fuel requires the management of local resources such as firewood, which host communities also rely on.

CRRF is designed to tackle multi-faceted problems like this, because it brings together the government, the refugee and host communities, as well as the humanitarian and development agencies, and ensures that all stakeholders’ equities are considered.

This is the sort of coordination and collaboration that the donor community, and CRRF more generally, seek to foster across-the-board.

Whether meeting the needs of refugees, providing humanitarian assistance to victims of drought, or even improving outcomes in health and education, we are strongest when we work together to find solutions and implement them effectively.

In taking the initiative of being a CRRF country, Ethiopia has accepted the challenge to re-think and re-engineer how we all handle the hosting of refugees.

It’s a daunting challenge, and an important one, because the lives of many thousands of children, women, and men– refugees and host populations alike – hang in the balance, as do the long-term prospects of both host countries and countries of origin.

The United States and others in the donor community are committed to working in partnership to ensure the success of this vital initiative here in Ethiopia.

Thank you again for being here this morning, and for your commitment to Ethiopia’s development and to the welfare of the refugees Ethiopia so generously hosts.